When Super Mario Bros. arrived, beating the game was a source of pride for most players. Those with poor reflexes or a low threshold for frustration would fizzle out before finally finding the right castle and saving the princess, but more tenacious players would stick it out, replaying the levels over and over until they could zoom through Mario’s adventure with perfect precision and timing. Eventually, merely beating the game wasn’t enough, and the question became “How quickly can you beat it?” This gave birth to the gaming subculture of speed runners  Mastering the ability to get through a particular game or level with the utmost efficiency is their goal. The new indie game Rush Bros. is laser targeted at this subculture.

It plays very much like the 2D Mario games, or any of their platforming clones. The characters leap over hazardous pits of acid and have to find ways to unlock barriers, all while avoiding spikes that sprout from ceilings, walls and floors (There are always spikes).

Yet Rush Bros.has a couple of things that help it stand out from the herd. First, it is set in a music-themed techno world where two DJ brothers compete against each other to race through the levels while dubstep thumps in the background. Sound and music are an integral part of the aesthetics, and players can even load music from their own library. Changing the soundtrack will have effects on the levels, matching the tempo of the Player’s choice of music. 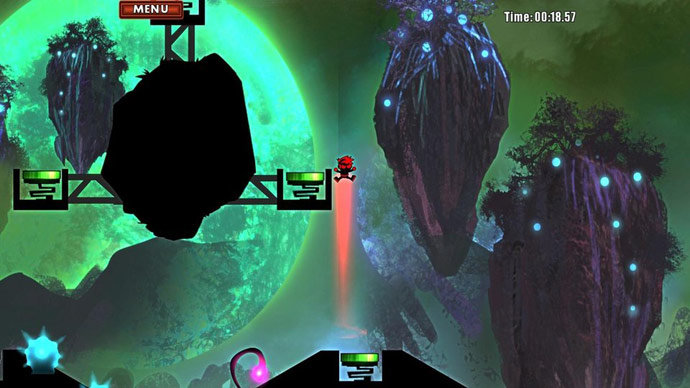 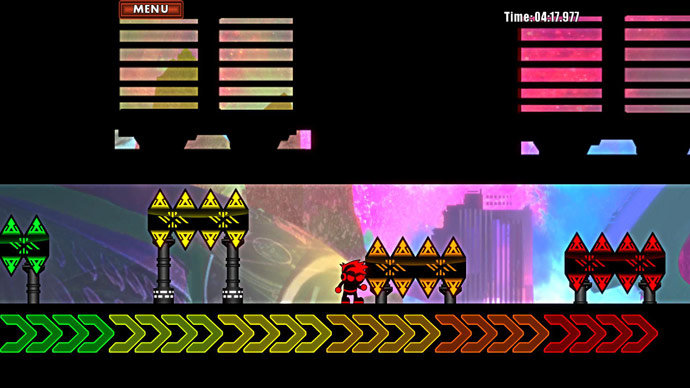 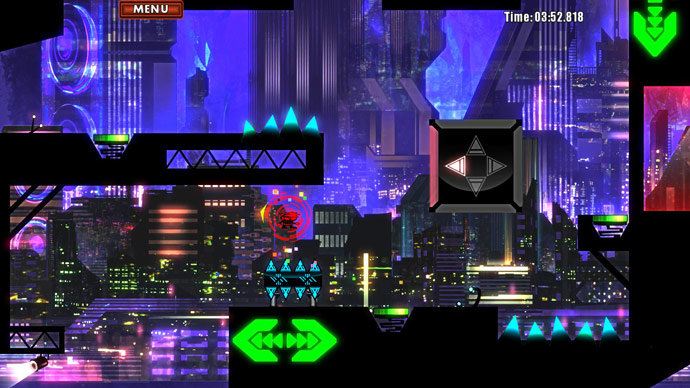 The second thing it has going for it is a focus on competition. While platforming has traditionally been a single-player genre of game, in recent years there have been a few titles that add in multiplayer, but usually as a form of cooperative gameplay like Splosion Man.

In Rush Bros. the multiplayer takes the form of a race to reach the end of the level. Players not only have to navigate the levels skillfully, but they can also play dirty tricks on each other with power-ups found around the levels.

Mario fans will note that this is a fusion of the playstyles found in Mario Bros and Mario Kart. While derivative, it’s still a terrific blend of two classic franchises. Who doesn’t like firing off a blue turtle in Mario Kart to take down a competitor at just the right moment?

Players can treat Rush Bros. as a single-player experience too. It currently has thirty levels, each of which take a couple of minutes to beat (The first time). The level design is very clever with multiple paths to explore, and simple puzzles. Some have fun trampolines that bounce the Player around at rapid speed, adding new mechanics to the “Run and Jump” formula.

The various power-ups aid in getting around the levels quickly, so finding them and reaching them before an opponent is key to getting the fastest possible time. Replay is justified to find the most efficient routes and dedicated players will find plenty of reasons to explore the levels repeatedly.

The controls offer most of the moves that platform fans will expect; the characters can run jump, wall jump, and slide. Other abilities like Double Jump require players to find a power-up to use them. While that might seem like a hassle, the levels are quite short, so it may only take seconds to get a cool power-up.

It won’t take most players long to blast through the selection of levels available now, especially since the game is targeted at a hardcore audience. However, the developer has stated that updates are in the works, including Steamworks support for players to create their own levels, along with new levels and modes.

The brevity of the experience is its greatest drawback, but that could very likely change in the near future if the development team makes good on their promise of more content. Speedrunners and hardcore platform fans will probably want to grab Rush Bros. as it is now, though.

Rush Bros. is available now on PC and Mac with an Andoid version on the way. It offers cross-platform play so that Mac gamers can play against their PC counterparts.