Omerta – City of Gangsters had a lot of promise. It’s developed by the same people that make the endlessly fun Tropico series and promises a Gangster-based strategy game, not really something we’ve seen since the sequel to the Eidos classic Gangsters: Organized Crime. The incredibly high price point at least hints at the idea that Omerta has been worked on to the level that’s deserving of that amount of money. Gangster Sims are criminally overlooked and I’m sure there’s a market for them. Unfortunately, Omerta has probably put off any of that market taking that risk again.

If you’ve ever played a browser-based MMORTS, you have a pretty good grasp of how Omerta – City of Gangsters will feel. The graphics are better, certainly, and the music and voice acting adds an edge that the browser games can’t hope to compete with, but much of the gameplay is basically the same. The fact that I’ve never came across an MMORTS that costs any money while Omerta costs almost as much as a full AAA title aside, the similarities are almost eerie. You buy businesses from the local area, turn them into something that will have an effect on your stats and upgrade them to better take advantage of their services.

It’s like someone at Kalypso was browsing Facebook one day, came across someone playing The Godfather: Five Families and decided to adapt it into a full game, dropping the free-to-play aspect while they were at it.

The similarities don’t end there. There’s the static map with animated characters wandering vaguely about to make it look true to life. There’s the fact that you’ll be waiting minutes for some of your actions to be carried out. Almost everything you do in this game is built around acquiring new resources. In the browser games they hope you pay your way into stopping the monotony and speeding things up. In Omerta, there’s no way out that doesn’t involve you kicking yourself for giving them money upfront.

The life of a gangster will have you rubbing shoulders with officials and police, but the options you’ll have when dealing with them are limited. Take just a moment away from reading this review and try to imagine how many different ways you could deal with a potential threat from the right side of the law… 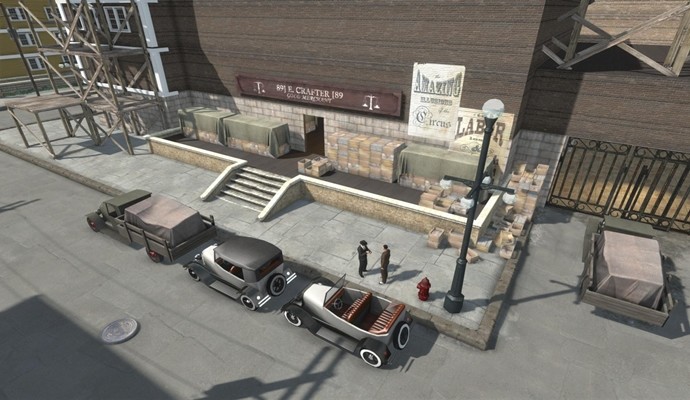 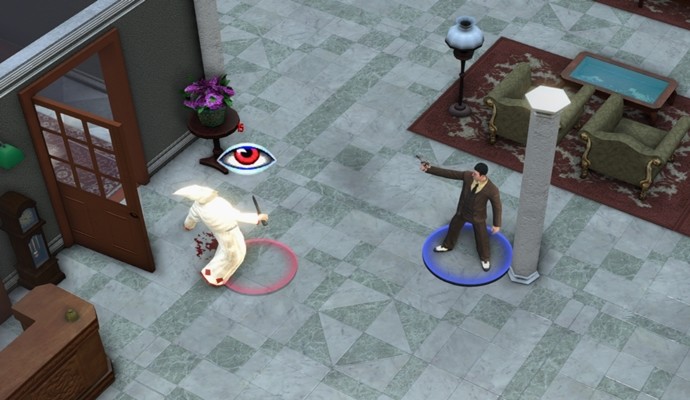 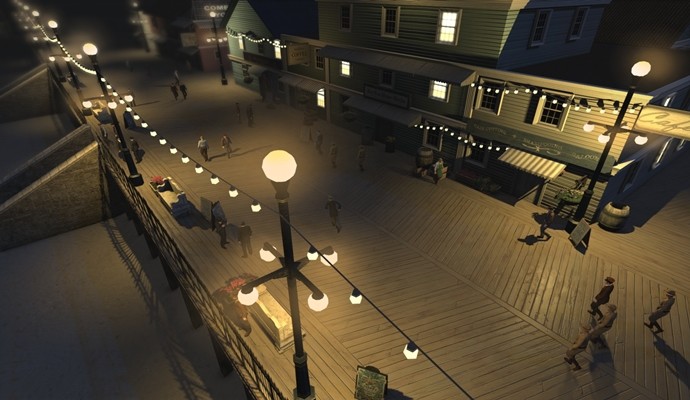 This game gives you four choices and they’re entirely specific to when an investigation has begun. Stopping that investigation before it has begun is even less limited and, as a result, stupidly easy, if you have the cash. Calling this portion of the game strategy or even business management is like saying Farmville is a deep simulation of the agricultural industry.

Omerta begins when a poor immigrant arrives on America’s shore with no money and no prospects. There’s really only one way it can go: the poor immigrant starts a gang and instantly starts killing people and taking their stuff. It’s not a problem, I didn’t expect much more than this, but if you’re here for the story you’re going to almost be as disappointed as if you’d come for the gameplay. After a fairly lengthy tutorial, you’ll be able to continue through a story where you rise up the ranks, dealing with anybody that gets in your way.

Combat is actually much better than the strategy part. It still doesn’t reach the heights it could, but it feels fairly deep. Turn-based combat can easily boil down to which team can hold out the longest, and Omerta is no different. There aren’t a ton of tactical locations to capture or sneak attacks to employ, although picking a goon as support before a battle can lead to a strategic advantage. It’s still likely to boil down to you hoping that the 67% likely move you’ve missed four times in a row actually connects, but at least that’s something. There’s a cover system, but it’s so badly implemented that sometimes you’ll end up better off out in the open than crouching behind a pillar.

Despite the flaws in the combat system, it is rather fun and you’ll end up experimenting with different characters and support effects until you successfully master the city. Then it’s back to the overview map as you slowly watch your money increase and your entertainment levels plummet.

The graphics in Omerta – City of Gangsters are better than they deserve to be. The city map is alive with colour and beautifully modelled 1920s cars rustle round town with no goal but to look pretty for the camera. There’s such a fantastic vibe to the whole thing, it’s almost unfortunate that you can’t take over one of your gangsters and explore at foot level.

The combat areas are less impressive, if only because of the odd angles you’ll be playing at. They’ve taken the perfect toy town of the main screen and held it under a magnifying glass and, frankly, the cracks quickly show. Animations include punching, kicking, crouching, shooting and leaning. Oh, boy!

Along with the graphics, Omerta manages to capture the sound of the 1920s era (or at least, the 1920s era as it is portrayed by Hollywood) pretty well. The music is catchy and period appropriate, nice enough to tap your foot to but not so overwhelming that it’s a constant presence. I can’t say I heard many different songs, or at least songs unique enough to register as different, but I liked what I heard.

The voice acting provides every stereotype in the book, and aside from the Italian immigrant that talks like he was born in New York, that’s exactly what I wanted. Irish drunks, uptight Italians; everybody is well represented and the few snippets of dialogue are sometimes amusing. More often than not, it’s a repeat of something you’ve already heard, but, like the music, you just start tuning it out after a while.

I thought this would be a game that would have you leading an army of Mafioso through gritty streets. Instead, Omerta is basically a puzzle game that has you waiting between moves and collecting money as a way of… collecting more money. As a game, it’s pretty terrible and only the most patient people will be happy with their purchase, especially if they pay the ridiculous $40. It seems more of a kick in the face that this chance to have a Gangster sim built by one of the biggest names in management games has been squandered. Save yourself your hard earned money and just play Thirst of Night, Uprising Empires or Godfather: Five Families. They might not have the great design, but they’re free and when you’re bored after twenty minutes, your wallet won’t feel the pain.

And when the main competitor to your full cost product are free-to-play Flash games, something has gone majorly wrong.