Mark of the Ninja Review

Mark of the Ninja

Stealth games are an odd sort. Numerous titles these days feature at least some sort of stealth mechanic, but most of them don’t use the concept of “stealth” as the primary gameplay element. In recent years, Deus Ex: Human Revolution and Dishonored served as examples of developers longing to bring back the stealth genre that was so popular at the turn of the century. While both titles were fine games, to me they still felt a bit lacking in terms of stealth mainly due to the fact both games featured numerous other styles of gameplay which rendered some of the stealth mechanics as a mere afterthought. Mark of the Ninja, on the other hand, is the very definition of a stealth game.

The main protagonist is an unnamed ninja with strange tattoos. This nameless hero, along with a female ninja companion named Ora, sets out on a conquest to take down the powerful villain Karajan. At the beginning of the game, the hero’s ninja lair is attacked by Karajan and he and Ora must save their master Azai. Upon accomplishing this task, Azai tells the history of the tattoos that the ninja wears in order to learn special abilities. With this information, the ninja and Ora seek to learn more information about the tattoos and unravel even more mysteries as the game progresses. 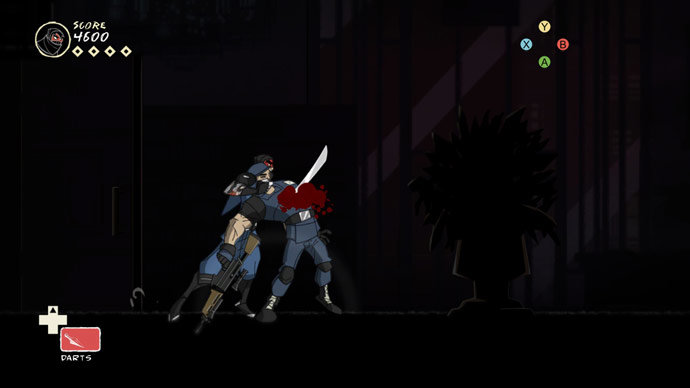 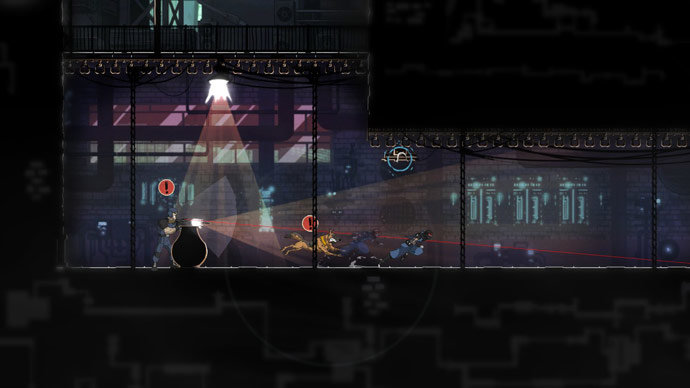 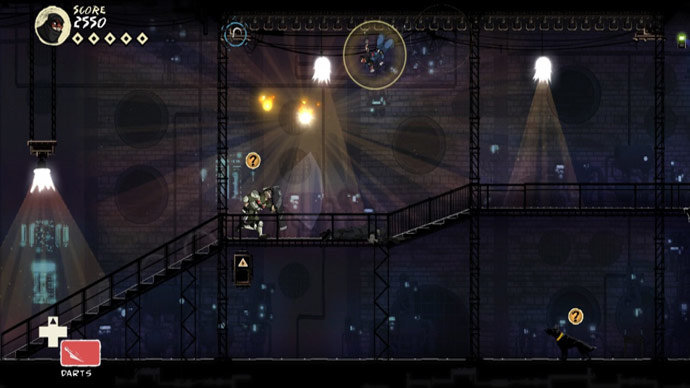 The story is told through animated cut-scenes. The story is actually rather interesting despite having a somewhat generic premise. The top-notch voice acting helps move the story along, and there are plenty of twists and turns that will keep you engaged. There’s even a surprise ending that involves choosing between two different options. This concept has become pretty much a staple for many modern games, but I found that it really works with Mark of the Ninja.

The gameplay is where Mark of the Ninja truly shines. Everything that you do involves stealth tactics, which can be preformed either lethally or non-lethally. The non-lethal options are the most difficult to pull off, but the game doesn’t punish you for choosing to utilize stealth kills. In fact, killing guards in clever ways and stashing their bodies often yields bonus points while playing through a stage and when your score is tallied up at the end of a mission. There are also achievements and unlockables that are dished out simply by experimenting with all of the different ways to tackle a level.

Your score is determined by a few factors: how successful you were with kills, distractions and remaining undetected, and any special side-tasks that pertain to what stage you’re currently playing. You’ll be given negative points if any bodies are found or you’re detected at all during a stage, as well. There are plenty of clever ways these tasks can be done in order to bolster your score, including instilling terror into the guards which causes them to attack each other. One way to do this is to cause a guard to witness another guard get killed in some horrific fashion, like with a spike mine or being hung from a ledge. There are even special darts that can terrify foes, along with other tricks to put bad guys out of their misery.

Naturally, distraction is perhaps the most important method you’ll use to stealthily dispatch guards and/or stay out of sight. Throwing knives can be used to destroy lights and power grids, and smoke bombs can be used to sneak past guards and security beams. Noise makers (firecrackers) work very well at getting dogs and guards to go the opposite direction of where you’re going, and chandeliers are just as effective in killing guards as they are distracting them. Even more options become available when you start acquiring special seals that can be used to purchase new stealth moves.

The stages take place, for the most part, in buildings. Most of these buildings have all kinds of secrets stashed inside them, including various trinkets and scrolls that will boost your score, unlock new abilities and even provide information. While you can attempt to just rush through a stage, it’s often more rewarding to stick around and see what the building has to offer. It’s not uncommon that exploration will unlock bonus stages, new outfits and side-objectives. Plus, it’s very satisfying to crawl through vents, turn off security systems and deftly maneuver past obstacles while you take your time scoping things out.

Mark of the Ninja is animated very nicely. The animations are smooth, and the ninja looks very graceful as you control him. The cut-scenes are well designed, and give the game a nice cinematic touch. The use of shadows and lights are perfect for the stealth gameplay, too. What I enjoyed the most about the visuals, however, is how your line-of-sight is effected. For example, if you’re standing behind a door you can’t see what is in the other room as it appears blurry. However, you can peak through vents and certain doors to see what’s on the other side. The graphics come into play here, as well, because there are still certain things that are going to be blurry because they’re not within your vision range. Overall, the graphics are great to look at and work exceptionally with the game design.

Other than being spotted by a flashlight or lamp post, the noise you make can also bring attention the guards. Noise is also paramount to figuring out your best chance to escape a room or know when a guard is turned the other way. The audio is used efficiently in this regard, and adds even more to the stealth experience. Mark of the Ninja’s score is also nice to listen to, and the developers were keen to keep the music quiet while you’re being stealthy, and to pump the volume when you’ve been caught.

Mark of the Ninja is one of the best games released in 2012, and is high on my list for one of the best stealth games ever made. Not only does the game far and away succeed in terms of gameplay, but it has all of these little things added into to it that make that much better. It’s clear that Klei Entertainment has put it upon themselves to redefine the stealth genre, and they accomplished that in spades.