9.3Based on
3 ratings
Login / Register to rate.

When Valve announced Left 4 Dead 2, the internet imploded. Fans had been promised a wealth of DLC, long-lasting support and now the developers had had the nerve to release a sequel. After mild controversy around launch and a steady sale-by-sale drop in price, this is a game that has become increasingly difficult to resist. Not only has the price dropped, but the content in the game has been expanded on as well. Along with the original five campaigns, Left 4 Dead 2 now contains every level from the first game, and a host of other content. If you’re looking for one of the best bargains in video gaming, pick up Left 4 Dead 2 in a Steam sale.

The infected are still attacking, only this time in a warmer climate. Left 4 Dead 2 feels distinctly different to its predecessor, thanks in part to the fact that it’s set in the southern states of America. The five base campaigns force you to fight across a crowded Bayou and through thick storms, dealing with a variety of infected and different deadly situations. Each campaign takes you across different parts of the same area, giving enough variety that you rarely get bored. Whether dealing with fire or across a suspension bridge, there’s always something to keep you on your toes. 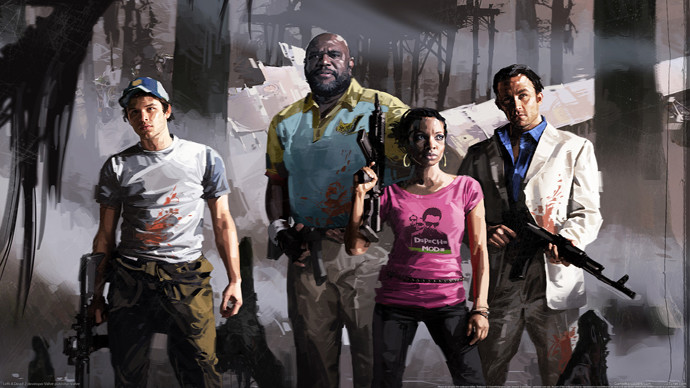 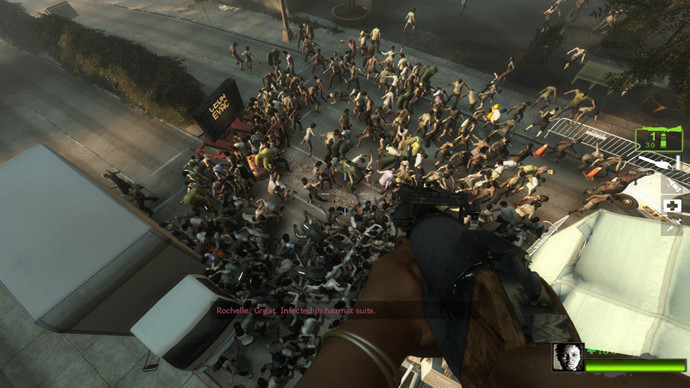 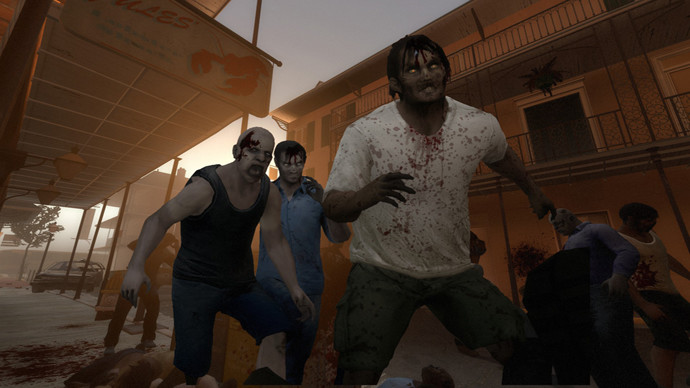 This is made even truer by Left 4 Dead 2’s unique AI Director. The Director ensures that no campaign plays out in exactly the same way twice. This is mainly done by throwing enemies at you in different locations, or having a bigger, more powerful monster appear unexpectedly, but it also reacts to the way you play. If you rush to the end of the level leaving your teammates behind, you’ll be punished for it, whilst slow, methodical exploration is rewarded with better items. Although the basic layout of a level can be memorized, the AI Director is guaranteed to keep things fresh, adding to the already amazing amount of content available at purchase.

The campaigns can be played in both a single player mode, and online. Left 4 Dead 2, like its predecessor, is basically an online game and playing with the AI controlling the other players has some very distinct drawbacks. Although the AI is generally very good (or at least above average), there’s still no replacing human tactics and somebody who just wants to play alone will fail to have the full Left 4 Dead experience. This is made worse by one of the least likeable communities in gaming. Playing with strangers can be a crapshoot of fantastic teamwork or facepalm-inducing annoyance. If your team wants to go faster than you, you’ll be kicked. If you’re better than somebody with an attitude problem, you’ll be kicked.

Your best bet is playing with friends, and that’s where this game shines. Under the right conditions, with a very carefully selected group of players, Left 4 Dead 2 becomes one of the most enjoyable experiences in gaming. A match can go from sheer tension to adrenalin rush to out and out hilarity in a matter of moments. The emotions that run through a single campaign are unlike perhaps anything else available today. Maybe the biggest hurdle between you and the perfect match is picking three friends to experience it with. Get that right and this is the sort of game that makes memories.

Basic gameplay is very simple. Groups of infected attack and you shoot them all until you’re good to move on. Campaigns are split into different areas, at the end of each is a safe house that lets you heal your character and replenish your ammunition. There are multiple ways of getting between safe houses, and doing so without incident will be very difficult. Along the way you’ll pick up new weapons and come across several different types of infected, but only with teamwork and fast shooting will you make it from A to B in one piece.

If you’v ever played a Valve game, you’ll know exactly what to expect from weaponry. There’s a good variety, but the guns are all pretty broad, relying more on the way they shoot than a slight variation in stats (like Call of Duty, for example). There are shotguns, assault weapons or rifles to choose from, each with their own strengths and weaknesses. You’ll be able to change weapons as you progress through a campaign, or at the safe houses. There’s also a variety of side arms, melee weapons and explosives to choose from, each which have their own unique strengths. Whacking, blasting and decapitating infected has never been easier, although the sheer amount of enemies that will attack you and the unexpected way in which they approach will teach you never to rely on a single strategy.

Along your journey you’ll come across a number of different types of enemy. The vanilla infected is quick, but hardly a threat and, frankly, they’ll drop dead if you look at them funny. Other infected either use their power to slowly whittle your health down or rely on sheer strength and speed to do as much damage in as little time as possible. All enemies will be easily deflected if you’re part of a good team with a wide range of skills, but it’s when you get one particularly weak ally that the AI Director will start taking advantage of your play style. Left 4 Dead 2 add a series of new special infected, but nothing that manages to be as iconic as the creepy Witch or the incredible Tank.

As well as just running campaigns, there are a number of other modes to try out as well. There are special versions of the campaigns that have you playing in a certain way, using a certain weapon or fulfilling certain objectives. There are other objective based modes in which you must fill a petrol tank while under constant bombardment by infected or the like. My favourite mode lets you play as the infected against a team playing the regular campaign. You take it in turns, sometimes playing as the infected, sometimes playing as the humans. It’s an interesting play on the base game and gives you a whole new appreciation for the special infected.

Valve have continued to support the franchise with a series of fantastic DLC offerings. First of all, buying Left 4 Dead 2 today will give you every level from the original Left 4 Dead as well. It’s not identical – the Left 4 Dead 2 levels add the new infected and the melee weapons – so fans not impressed with the additional features of the latest outing won’t be uninstalling the first game, but for an average player there’s no need to invest in both titles.

There are also a series of original DLC campaigns, two of which better link the events of Left 4 Dead and Left 4 Dead 2. These are all available for free on PC and Mac – you’d need to pay on Xbox 360 – and will be downloaded once you’ve purchased the game. If all these campaigns aren’t enough in terms of replayability, you’ll need to work extra hard to get all of the Steam Achievements and, when you’re done with those, a trip to the Steam Workshop guarantees that you’ll never run out of infected to squash, characters to play as, weapons to kill with and campaigns to run through.

Left 4 Dead 2 doesn’t offer a massive amount in terms of gameplay, but the sheer amount of variety in the content and the AI Director means you can play a thousand different ways before boredom sets in. With the help of the modding community, there’s perhaps more content then there is time to play it and a thriving community nowhere near ready to stop playing.

Like many of Valve’s games, Left 4 Dead 2 is a nice looking game designed to run on a variety of systems and on both low end and high end machines. It’s definitely not a game to write home about visually, but it’s decent enough that you’ll never be distracted and that there aren’t crazy high specs required to play. It’s more than passable and the level design makes up for the occasional less-than-shiny moments.

The way that audio works in Left 4 Dead 2 is very impressive. Firstly, the voice acting is fantastic across the board. The characters you play as are brought to life, and that makes the battle against the infected even more important. Snippets of banter between player characters make travelling a joy, although by the time you’ve played the campaigns a few times you’re likely to have heard everything you’re going to hear.

Music is handled by the AI Director and is used to give you a heads-up as to what’s coming next. There are spots of music in this game that will make your skin crawl as you race to turn off your flashlight in the face of a Witch. Heavier music indicates an incoming horde of infected. Although there’s not an awful lot of variety, the way that incidental music is set makes variety almost impossible. Thankfully, it works well enough that you won’t care.

Left 4 Dead 2 is one of the best shooters available on PC. With tens of hours of content without repeat and a million reasons to keep coming back to more, there’s so much value here that it hurts. If not for the occasionally repetitive gameplay, rapidly aging graphics and sometimes awful community, this would perhaps be a perfect title but these are all issues that will pop up time and time again. If you can scare up a decent set of players though, the possibilities are endless.