Roguelikes can be an acquired taste. The randomness, the perma-death, and the genre’s notorious difficulty can leave a bitter taste in the mouths of some gamers. Well-crafted titles like FTL, however, can embrace these conventions and come up with a demanding but truly rewarding gameplay experience. FTL is a highly addictive blend of action and strategy that, for $10, you simply cannot afford to miss.

The goal itself is simple. You are in command of a ship that must travel through seven sectors to deliver information to the Federation base. These sectors may be civilian controlled and somewhat peaceful, or controlled by pirates or various alien species who don’t take kindly to trespassers. All the while, you are being followed by the Rebel fleet; a pursuit which culminates in a showdown with the Rebel flagship in the final sector. 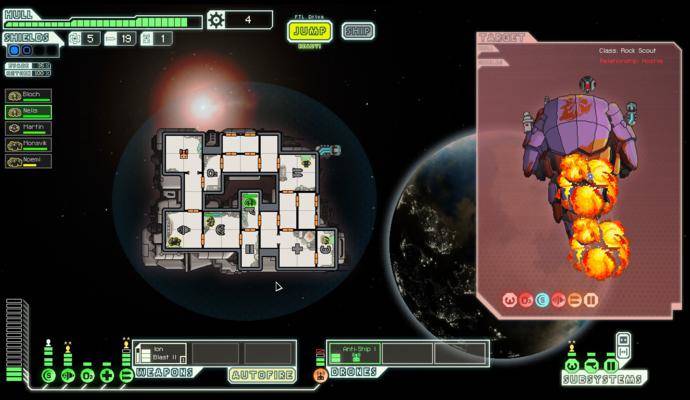 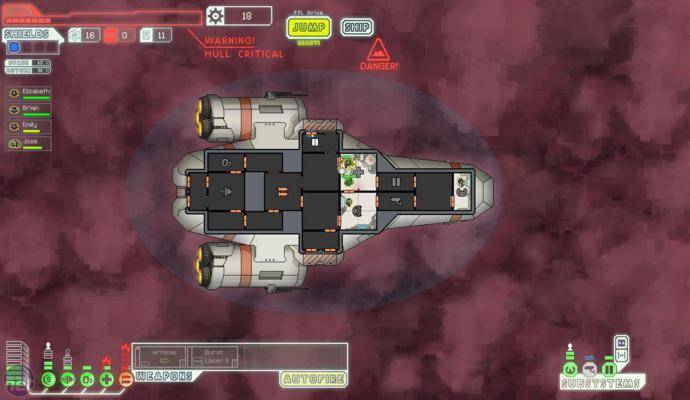 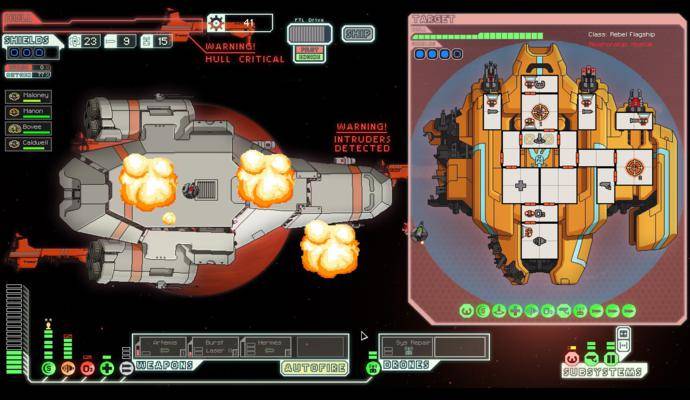 FTL’s style of gameplay may appear fairly simple upon first glance, and the tutorial seems very straightforward, but once you start a campaign the complexities of the game begin to shine through. The game begins with ship selection. At the outset, only one ship is available, but eight more ships can be unlocked. Some are acquired by accomplishing simple tasks and others through more convoluted means. Each ship comes with its own pros and cons in the forms of different starting weapons, ship systems, crew, or augmentations. Different equipment layouts can also be unlocked for each ship by completing two each ship’s of three unique achievements.

Once you choose a ship and set off on your mission, you’ll find yourself looking at an image of space speckled with yellow dots. Your goal is to travel from dot to adjacent dot until you get to the point marked “Exit” on the other side of the map. Along the way you will encounter other ships which may need to be fought, bribed, bartered with, rescued, or avoided. It is through these interactions that scrap, the game’s currency, can be obtained. You will also have to deal with environmental hazards like asteroid belts that will bombard your shields and hull, nebulas that will disable your systems, and stars that will cause fire to break out aboard your ship.

Survival in FTL depends on managing your resources. For a price, your ship’s weapons, shields, engines, and other systems can all be upgraded for better performance, but will require additional energy units to be bought in order to function at full power. Since different ships start out with different abilities, knowing where to best invest your money and energy can be tricky. Not all your scrap should be spent on your ship though. You will randomly encounter stores which offer repairs to your ship for a price based on the amount of damage you have sustained. Stores also have fuel, missiles, drone parts, and various weapons, augmentations, and crew members for sale.

Combat in FTL varies depending on your ship selection, loadout, and the enemy that you encounter. You may use laser with infinite ammo, shield piercing missiles, multi-room damaging beams, or have automated drones do your fighting for you. No matter what approach you take, the idea is pretty straightforward: choose which weapons get power and what rooms on the enemy ship you want to target. Then you have to wait for your weapons to charge and see if they connect with their targets. It may not sound too exciting, but there are other factors which raise the tension. While you’re trying to turn the enemy ship into floating debris, they will be firing on you and dealing damage to your hull and ship’s systems. As a result, fires may break out, your hull may rupture, or your systems may fail.

Managing your crew and making sure that they are manning stations, repairing damage, putting out fires, and not being killed by enemy boarding parties can be very difficult, but coming out of a tough battle in one piece feels very rewarding.

The best about this game is that although each playthrough will be based on this basic structure, no two will be exactly alike. Every map, every point you will travel to, every enemy you will encounter, and every choice you are offered and the results you reap will be random with each new game. For example: when you encounter a Slaver’s ship, what will you do? Fight it? Look the other way in exchange for a bribe? Buy a slave’s freedom and take them on as crew? Succumb to their threats and send over a crew member? What you choose depends on what best suits your particular situation. Sometimes, as with any roguelike, luck is the key factor. Maybe you’ll make all the right choices and come away with loot and riches, or maybe you will unwittingly jump too close to a star and all your crew will die in a fire. In FTL, your choices write the story, which makes each replay a fresh, addicting experience.

FTL looks good for what it is. The ship designs and background graphics are cool, but simple, and there aren’t any impressive effects to speak of. You’ll spend almost all of your time looking at top-down cross-sections of spaceships which show different rooms and the systems contained therein. While there are seven different species you can have as crew, the sprites are so small that not much detail can be achieved. Each species looks unique enough that mistaking one for another is highly unlikely. If you have several of one species on board, however, telling them apart is impossible without holding the cursor over them and seeing which name pops up. That being said, whatever shortcomings FTL has in the graphics department can be mostly excused because the look fits the gameplay. I really couldn’t imagine this game having the same feel and delivering the same experience without the retro, 16-bit look. Also, the game is $10, so what do you expect?

The sound design in FTL does an excellent job of establishing the game’s atmosphere. The best way to play this game is with no distractions and a good pair of headphones. The music manages to capture the retro sci-fi feel with digitized, 8-bit sounding bleeps and bloops, but these notes are underscored with some eerily ethereal tones that really convey that you are on your own in cold, dangerous space. The sound effects are also top-notch. The deep, muffled thud when a laser connects with the enemy’s hull is very satisfying, but not nearly as much as the metallic scraping and crunching that occurs when that same ship is ripped into pieces by a missile. Even the doors and warning sirens of your ship are sure to stir up nostalgic feelings for any science fiction fans. The only real gripe with the sound in this game is that there is no voice acting, but this also fits perfectly with the game’s retro style.

If you like a good challenge, tense action, and deep tactical gameplay, then you should play this game. Although it may be a bit difficult at first, once you get the hang of it you will not be able to stay away from FTL. It is $10 on Steam. Go buy it, sink countless hours into it, and thank me later.