The first Borderlands was one of the breakout successes of 2009. With its incredibly unique blend of first person shooter action with role-playing game character customization, Borderlands was an instant phenomenon. Gamers logged thousands of hours shooting bad guys, picking up loot, and repeating. Three years and lot of DLC later, Gearbox has finally released a proper sequel, complete with new characters, new gameplay features, and of course, about a billion new guns.

Borderlands 2 once again finds players on the world of Pandora, five years after the events of the first game. Ever since the original four Vault Hunters defeated the Destroyer, a strange and valuable substance called Eridium has started to appear on the planet. Due to the players’ actions in the first Borderlands and its subsequent downloadable content, the Hyperion Corporation has been able to take control of the planet away from the other gun manufacturers. Led by Handsome Jack, the corporation is now trying to destroy any resistance as it strips the planet of any and all Eridium. 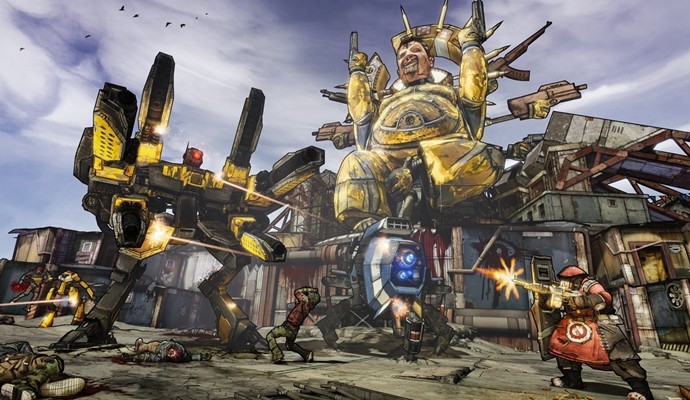 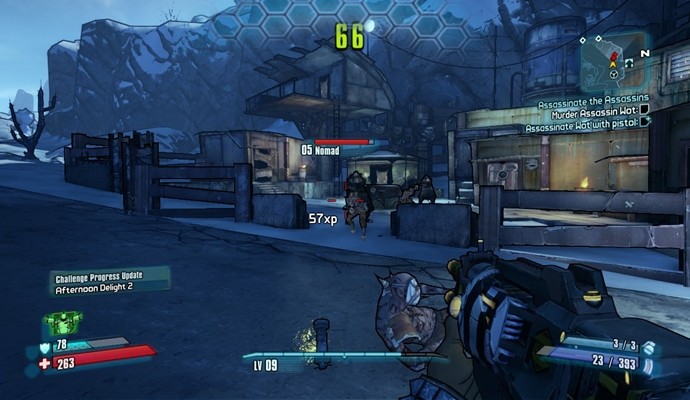 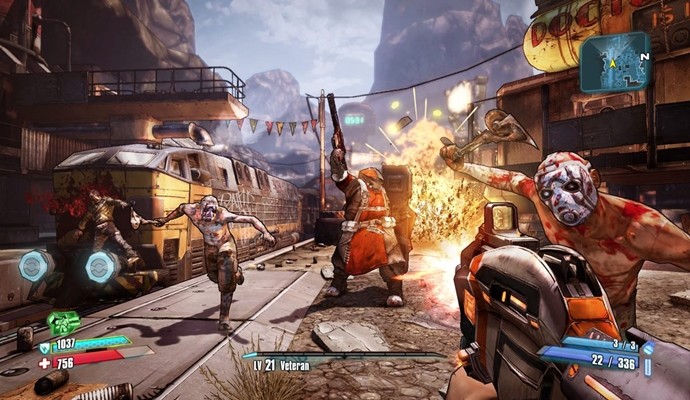 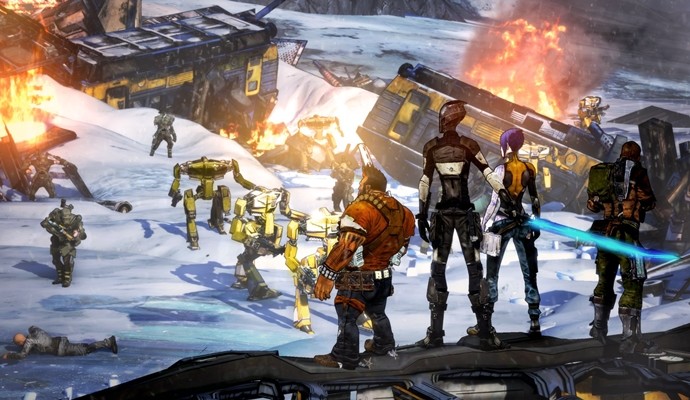 However, rumors of an even larger vault, hidden somewhere on Pandora, has attracted a brand new generation of hunters. Borderlands 2 finds you as one of these five Vault Hunters as they tangle with Handsome Jack, the armies of the Hyperion Corporation, and the various bandits and monsters that populate most of the planet.

Eventually, players will learn what happened to the original four Vault Hunters, meet old allies and new enemies, and finally discover who exactly the mysterious Guardian Angel is.

Borderlands 2 is a first person shooter with a heavy helping of role-playing game features. Fans of the first game will be glad to hear that the sequel maintains a surprising number of gameplay elements from the original. Players develop a character by killing enemies, gaining experience points, and leveling up, allowing them to earn new skills.

Each of the five new characters has their own distinctive array of these abilities. Salvador the “gunzerker” can wield two guns at the same time, throw multiple grenades at once, quickly regenerate health and ammo, or draw aggro away from his teammates. Players familiar with the first game can probably see the similarities with Brick, minus the punching.

Maya, a new Siren, has the ability to immobilize enemies with her Phaselock, and also utilize the elements of fire, electricity, corrosion, explosions, and slag to her advantage. Axton is similar to Borderlands’ Roland, and can create a deployable turret (or two), armed to the teeth with machine guns and rockets. Zer0 inherits Mordecai’s penchant for sniper rifles and pistols, and can also create decoys of himself to fool enemies.

The fifth character is only available via a downloadable content pack. A fiery cyborg girl, Gaige the “Mechromancer” can summon her giant, robotic “bully deterrent” to help her fight. Each of these has their own unique set of three skill trees, giving players plenty of room for customization and replay value.

Additionally, Borderlands 2 sees the return of the procedural loot system that was the core of the first game. Chests, lockers, and various foes will drop a random assortment of money, power ups, and of course, many, many guns. The trailer advertised that the game had over 87 bazillion different weapons, and that number might not be so far off. In addition to the random drops, each gun’s stats, look, and functionality are also randomly generated, giving players a near infinite number of different arms to compare and utilize.

The customization options don’t even end with skill trees and guns though, as players will further be able to tinker with their characters using various class mods and grenade mods, which further alter your strengths and weaknesses. If it isn’t clear by now, character customization is the name of the game. After a while, even the shooter mechanics feel like just an excuse for players to collect and compare more loot. That’s not necessarily a bad thing, but if you’re looking for a very linear, streamlined shooter experience, this is not the game for you. Borderlands 2 demands a pretty hefty time commitment, with satisfaction coming from developing and advancing your characters.

If you’re looking to show off your rare loot and high level characters, the four player online co-op mode also makes a return. In fact, a lot of the side content feels tailor made for multiplayer squads, and in general, the game is simply a lot more fun to tackle as a group. Unfortunately, the lobby and matchmaking system hasn’t improved much since the first game, so having a few friends online to game with will be a heck of a lot more convenient than trying to play with strangers.

In terms of the actual shooter mechanics, Borderlands 2 feels a bit sharper than the original, but overall, things are more or less the same. The controls are mostly unchanged, utilizing a fairly standard WASD setup, although the second wind system is a bit tweaked. Combat situations are a bit more dynamic this time around though, with enhanced AI behaviors, as well as enemies that act differently depending on where they’ve been shot and how much health they have. Enemies will also utilize the environment more, with some of them crawling on the walls and ceilings, adding a bit of diversity to an otherwise standard shooter.

The graphics are definitely a bit sharper, but thankfully Borderlands 2 has kept the cell shaded, cartoon-like look of the original. This not only gives it a very striking and unique visual style, but also helps to keep the system requirements fairly low, at least compared to most modern shooters.

The audio in this game is definitely a stand-out bit, very nicely complementing the hilarious writing that’s become a trademark of the series. All of the characters are fully voiced, including the enemies, and many of the NPCs give performances funny enough to warrant a purchase by themselves.

The ambient sound is also quite distinctive, and along with the great soundtrack, really envelop players in the world of Pandora. Of course, the real highlight of the game’s audio is the guns. With so many different types, it must’ve been a huge challenge to give as many as possible a unique sound. Luckily, the sound designers at Gearbox managed to pull it off, and each of the game’s weapons feel much more interesting and exciting to try out.

Borderlands 2 feels less like a proper sequel, and more like general, overall improvement on the first game. Luckily, the original was one of the most fun shooters in recent memories, so that’s not entirely a bad thing. Even with the shooter formula mechanics growing a bit stale, Borderlands 2 manages to keep things fresh through its sharp writing and wealth of character customization options.

Although it demands a fairly large time commitment to really get into the experience, it’s easily one of the most entertaining, hilarious, and downright addictive games of 2012. If you’ve ever wanted to mix Call of Duty with Diablo, Borderlands 2 is about as close as you’re going to get to a perfect blend of shooters and role-playing games.