If you never got around to owning a Wii U – or if you did but never got a chance to play Bayonetta 2 – Nintendo is giving you the ability to play both Bayonetta 1 and 2 ahead of the launch of Bayonetta 3 later this year. While my colleague Daniel has been working on our review of Bayonetta, I’ve been working on Bayonetta 2. Although it hasn’t been that long since we all had the opportunity to play Bayonetta 2 on the Wii U, I think it was very important for Nintendo to bring the whole trilogy to the Switch. But has there been any improvements in the two years between the Wii U launch and the Switch launch? Let’s dive in and look.

Former writer John Clements reviewed Bayonetta 2 when it was on the Wii U, and his review in it’s entirety can be viewed by clicking the link or looking below! We want to focus here on the changes to the Switch version!

The first obvious difference between the Wii U version and the Nintendo Switch version is a drastic improvement in frame rate, which makes the entire experience much more enjoyable from my point of view. Numerous outlets have reported that the frame rate in the WIi U version of Bayonetta 2 would often dip into the 30s, while on the Switch, frame rate seems to run relatively consistent at 60 fps. It is definitely not perfect, as dring some of the most intense moments you will notice frames dropping; but overall, from start to finish, the experience on the Switch is much cleaner, and therefore, much more enjoyable.

While frame rate gets improvements, the graphical output remains much the same, at 720p both docked and handheld.

Support for amiibo is still alive and well in Bayonetta 2, which means you will be able to play through the game with costumes and weapons inspired by some of your favorite Nintendo characters, obtained by spending the currency you receive in game and from tapping your amiibo. You can also get consumable items that will make combat a tad easier. Amiibo can be used up to 32 times per day, but as my experience indicates – and the same goes for other reviewers as well – doing so will make Bayonetta 2 a much easier experience. Be warned!

The changes in Bayonetta 2 aren’t going to wow anyone, but for those who missed out on the experience during the days of the Wii U – and let’s face it, that is a lot of people – or for those that want to play the definitive version of the game ahead of the launch of Bayonetta 3, this title is definitely something you’ll want to pick up. Please read more into the story of Bayonetta 2 below, and let us know if you will be picking this title up on Nintendo Switch this year!

The Umbra Witch is Back and Better Than Ever

Bayonetta has been missed. Without her flashy moves, her torture attacks, and her unbridled sex appeal, video games have become rather boring. Nintendo, Sega, and Platinum Games have partnered together to bring us the best third party game available on the Wii U since The Wonderful 101. I havent had this much fun since the first installment and it is an experience like no other. Throughout the 10 hour campaign you will fight on aircraft falling from the sky, use enemy weapons as a stripper pole, climb mountains riddled with Angels teaming to end your plight, and descend into hell all to rescue the soul of Bayonettas friend Jean. Bayonettas flashy, fast paced combat is back and better than ever. Nothing has ever looked so good on the Wii U.

Bayonetta 2s plot is even more insane than the first game and it dives deeper into the character of Bayonetta herself. Bayonetta 2 revolves around a world that is being torn asunder by both Angels and Demons this time around, and with a mysterious boy named Loki you will fight through hell to save Jean. The balance between the Lumen Sages and the Umbran Witches have long since crumbled and their plight seems even more at a breaking point since they must work together to end a malevolent force that looks to defy the balance of all existence. This is where you come in.

The best part about Bayonetta 2 is that Cereza (Bayonetta) grows exponentially as a character and after the credits roll, you will have a better sense of who she is as a character

As Bayonetta you will dismember demons, torture angels, and look rather marvelous while doing it. The best part about Bayonetta 2 is that Cereza (Bayonetta) grows exponentially as a character and after the credits roll, you will have a better sense of who she is as a character.

If you missed out on the first game as it wasn’t released on Nintendo’s previous console the Wii, you can now enjoy it in all of its glory as it is being included for free with Bayonetta 2. The game looks like a simple port at first, however Platinum Games have added in new Nintendo inspired costumes to dress Bayonetta up in and there is nothing like shoving an angel into a guillotine as Princess Peach. Also the touch controls included in Bayonetta 2 are available for use if youre into that sort of thing.

Bayonetta 2 runs at constant 30-45 frames per second and at 720p it looks fantastic. For everything that is happening on screen I never noticed any slowdown or issues involving the Wii U hardware. This game proves that the Wii U is hungry for more fast paced action oriented experiences. The highly praised combat system returns and though there are little improvements since the first game, it has never been more polished than this. Attacks are mixed with punch, and kick options and the combat system is fluent and exhilarating. Rapidly entering combos as you completely destroy everything in your path as a sexy witch is ridiculously fun, and Im glad that we get to have another go at it. 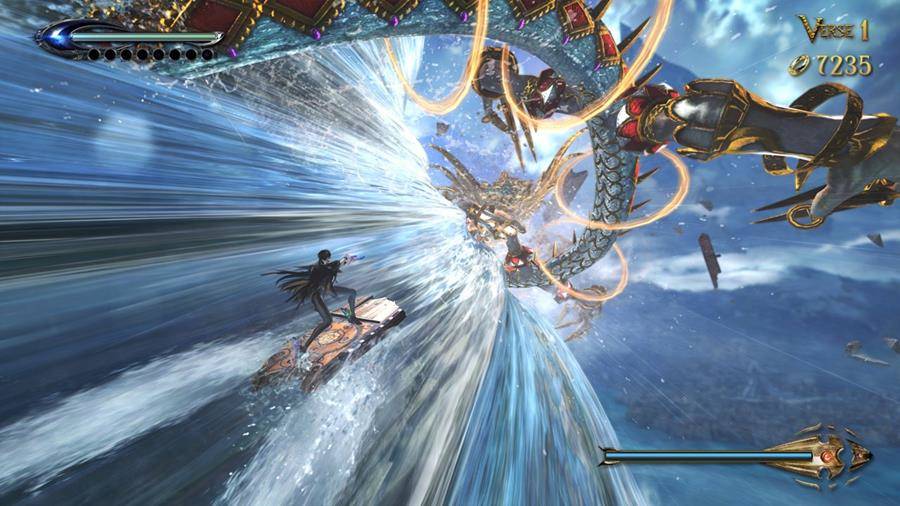 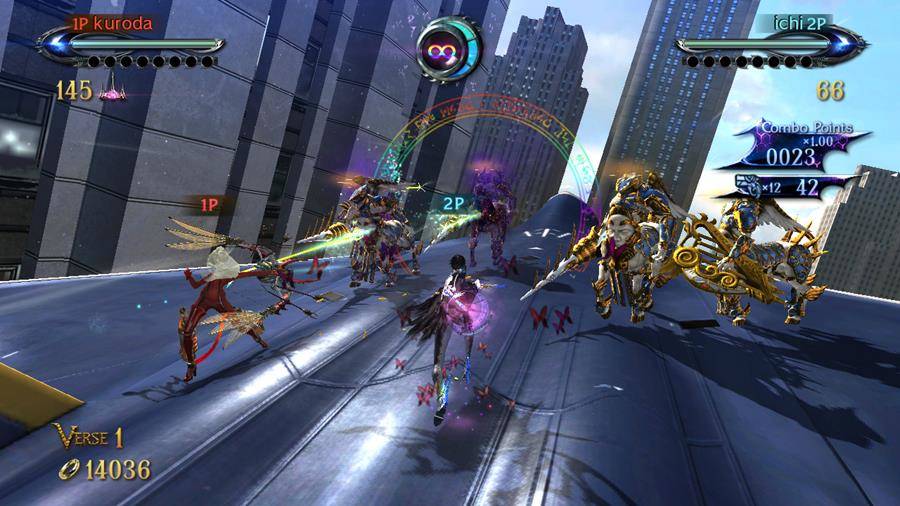 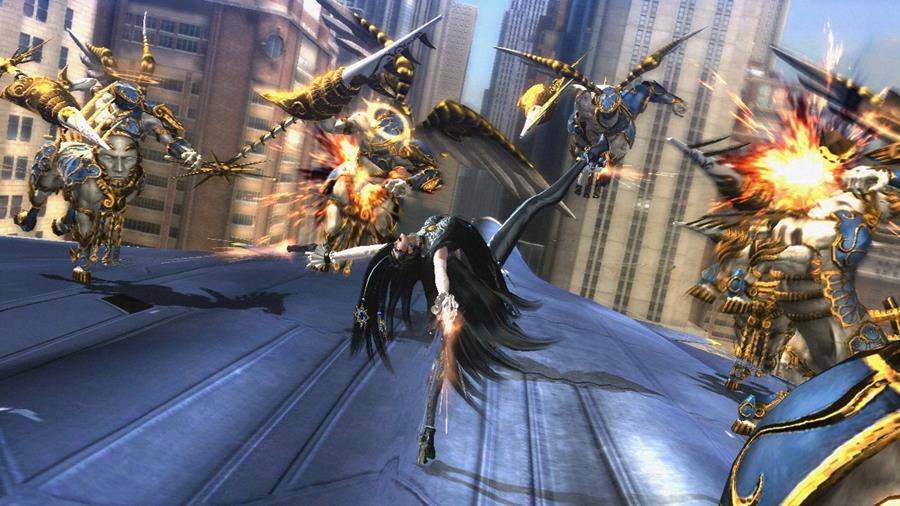 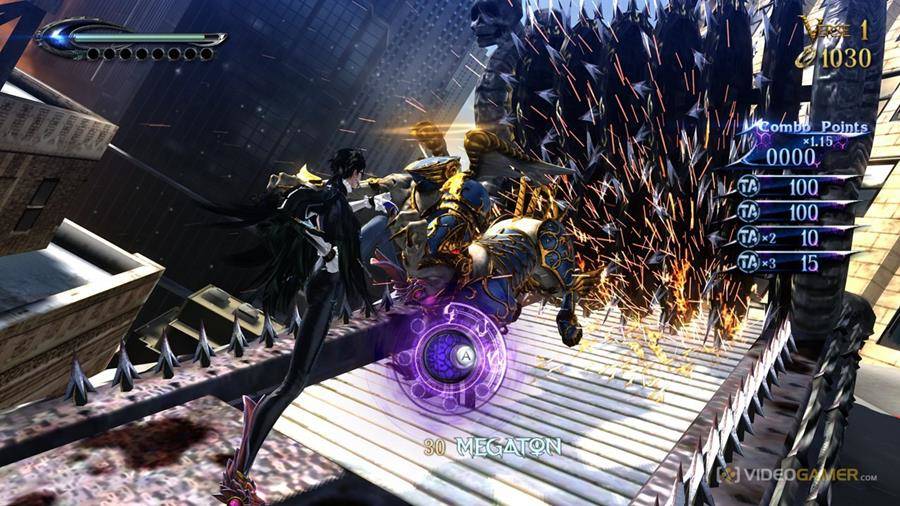 Also returning is the Umbran Climax which unleashes an even more powerful combo than usual as your magic meter builds from successful combos. This is where the reward of the gameplay truly comes into play. If you are successful in decimating your foes you unleash a climax attack that breaks down the most powerful of enemies. Watching them quiver in pain as you mutilate their health bar makes you want to keep playing, and its what makes you want to master the system. Also back are the trophies and achievements after battles ranging from Stone (the worst) to Pure Platinum (the best).
This game proves that the Wii U is hungry for more fast paced action oriented experiences

These achievements are determined by how much damage you’ve done and how much damaged youve taken in the previous skirmish. By replaying you will get better and its the reason that Bayonetta 2 is so addictive. I would recommend playing with the Wii U Pro Controller as it just feels more at home than the gamepad which can feel a little clunky in the hands at times. Bayonetta 2 requires fast and repetitive button mashes that makes your gamepad wince in pain.

There’s really nothing new about Bayonetta 2 except the story, a few new characters, enemies, and an online multiplayer option that feels like a last minute add on but that’s ok. Bayonetta’s mechanics are the things dreams are made of and there really is nothing wrong with keeping what works. The game plays the exact same as the first Bayonetta so don’t come expecting some new changes as you will be disappointed. My only gripe with Bayonetta 2 is the ever so intrusive QTE moments that really tear you out of the experience. I had hoped that they would do away with these as they are increasingly becoming more and more unpopular with gamers however they are still alive and well in this 2014 sequel.

Gamers have spoken and the love they share for Bayonetta 2 is unprecedented. What started out as a highly regarded beat em up, action game on the Ps3 and Xbox 360 has now turned into a fully blossomed and highly praised franchise. Bayonetta has proven herself among gamers years ago as many action games of today are compared to the games flawless mechanics. Bayonetta 2 has even reached new heights among audiences as Bayonetta 2 has been nominated as a Game of the Year contender. This is because Bayonetta 2 simply does a lot of things right with only minor missteps along the way. It gives gamers the experience they want and it doesnt try to change up the formula too much which usually leads to over exerted let down. Bayonetta 2 is a game for gamers and its a franchise that will hopefully continue to please audiences for years to come.