The keyboard that came with a Dell might be good enough for a civilian, but Space Marines, Dovakiin, and Zombie Hunters need a little more out of their primary input device. Mad Catz makes some very elaborate gaming keyboards that sport integrated touch screens, modular design and dozens of programable keys, but their S.T.R.I.K.E 3 is a less expensive gaming keyboard that keeps many of the features that gamers want, but with a smaller price tag.

First of all the S.T.R.I.K.E. 3 has a bright backlight that can be adjusted in color and brightness. Some competing products have keys that will lose their marking over a year or so, resulting in big a glowing circle where WASD used to be. That doesn’t seem to be as big a problem with the S.T.R.I.K.E. 3; after a few weeks of jabbing the S.T.R.I.K.E 3 with long fingernails, and even after deliberately scratching at some of the keys, the letters don’t show any wear or distortion. While that’s a short term test, it shows a promising degree of resilience.

Even deliberately scratching at some of the keys, the letters don't show any wear or distortion

It has twelve extra keys for users to program as they like, and it comes with an app for setting up these and other features. Seven of the keys are in the upper left hand corner, lined up a couple of inches above the ESC and F1-F4 keys. The other five programable keys are placed above the arrows in an inverted “U” pattern. These keys are slightly recessed, so players can distinguish them by touch alone. A special app allows these to be used for creating macros, or for just remapping other keys.

A fun feature of the customization software is the ability to change the color of the backlight. Players can set it to anything they like thanks to a color mixing interface, and there is a button for scrolling between 3 different Modes. Players can set the Mode colors to anything they want, and each mode can have a different configuration of keys and macros too. It’s functional – and showy for LAN parties. 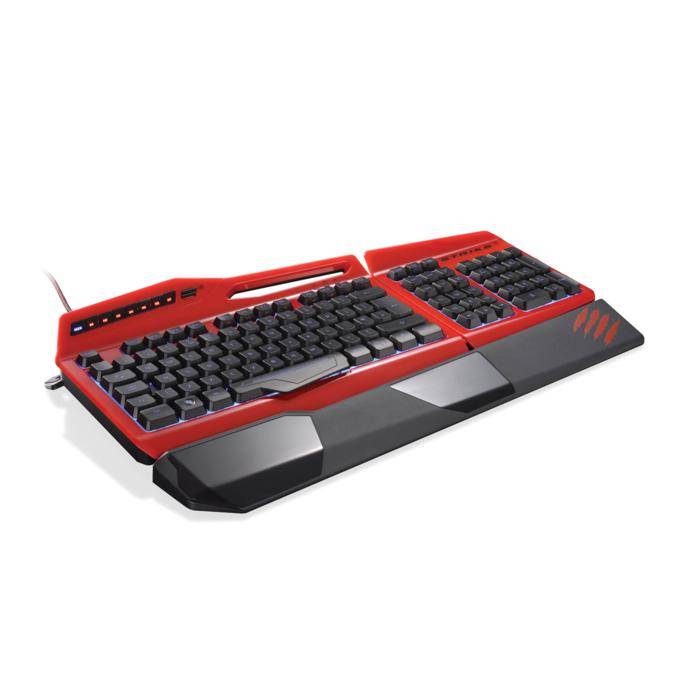 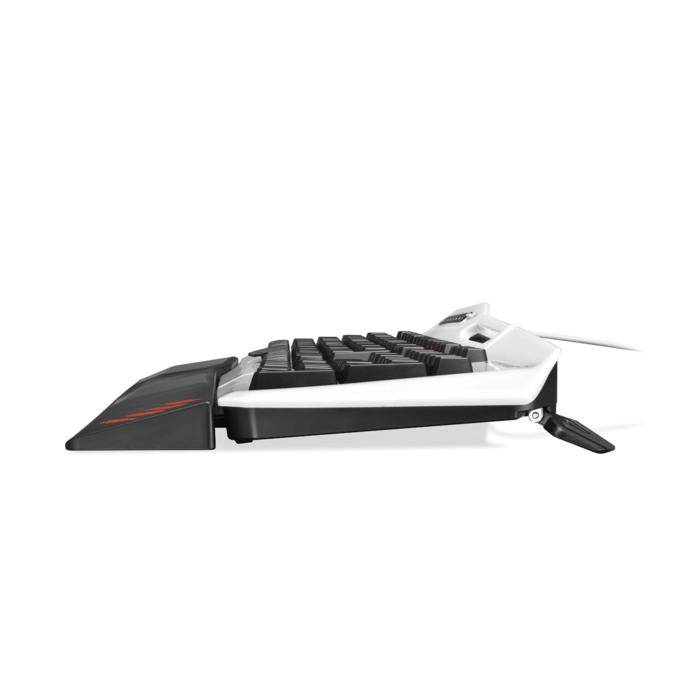 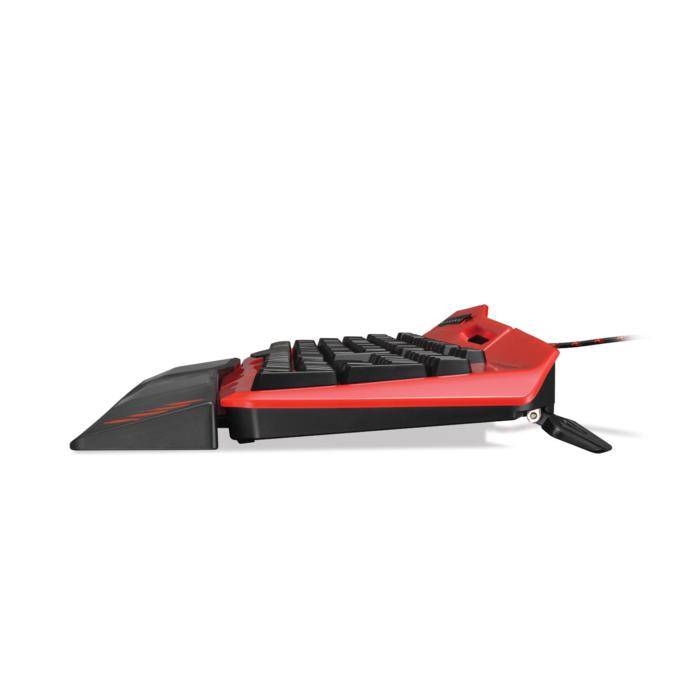 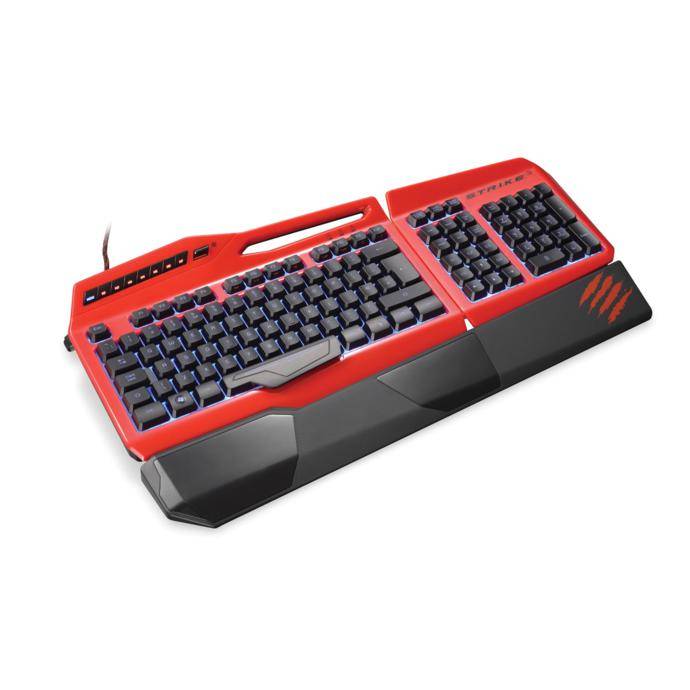 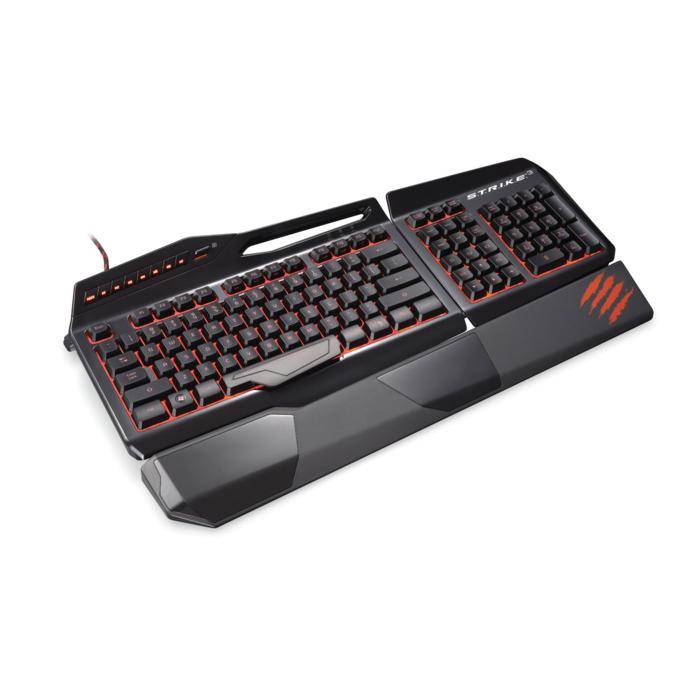 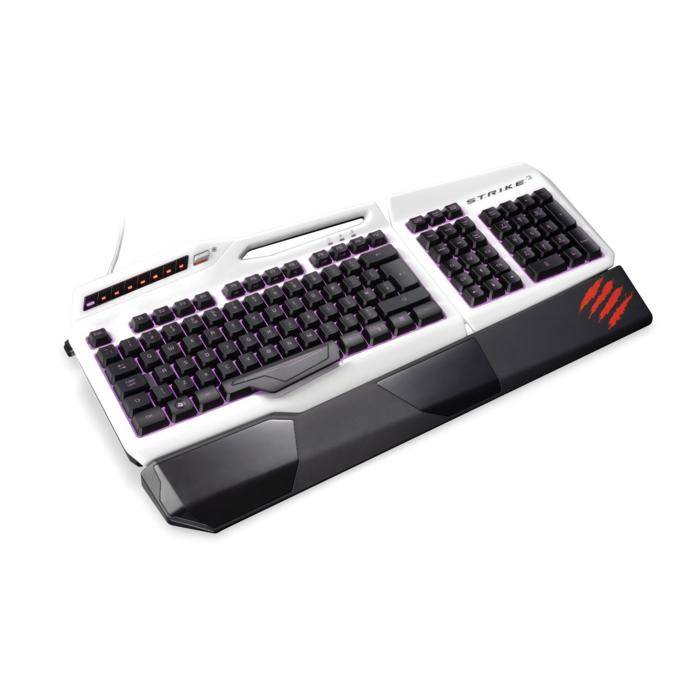 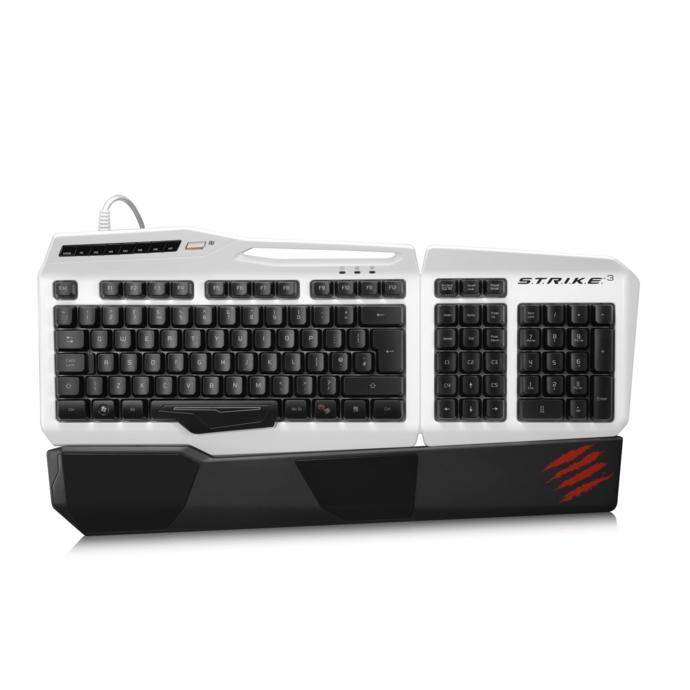 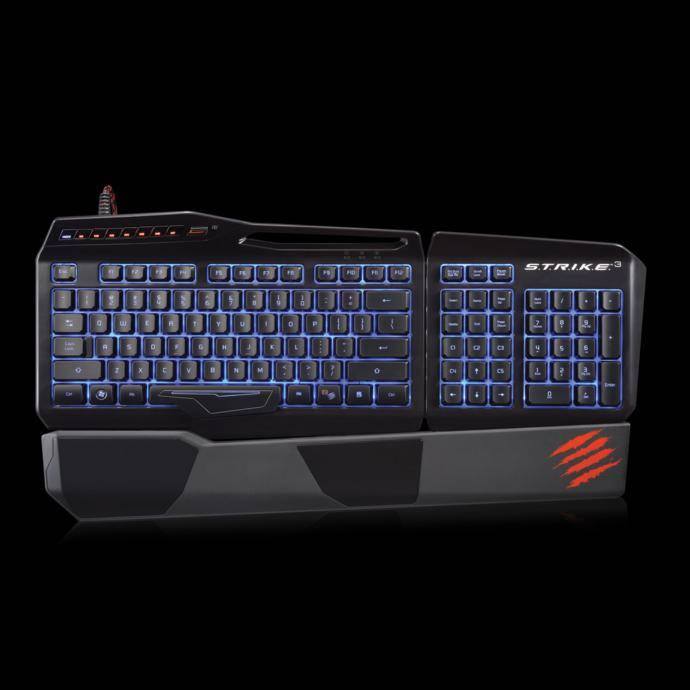 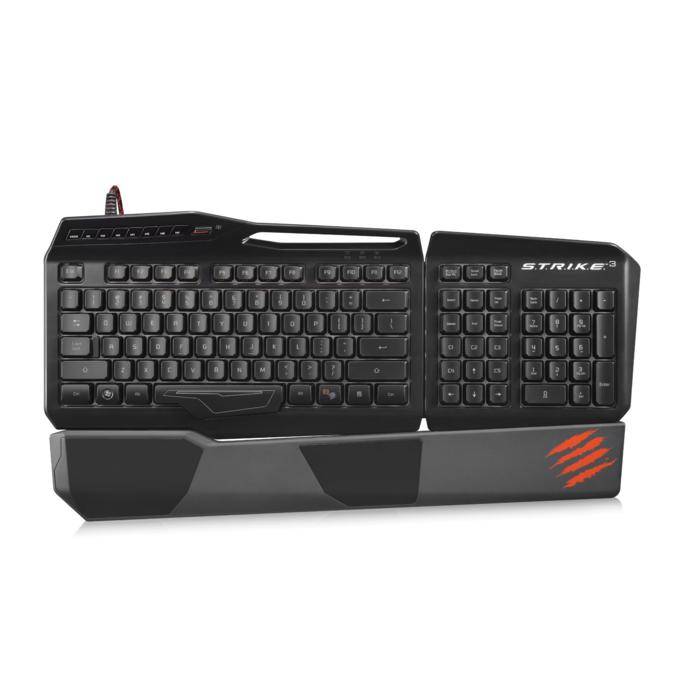 The S.T.R.I.K.E. 3 has a good deal of ergonomics to the layout, including an oddly-shaped Space bar that juts out at the bottom, making this easier to hit for a gamer’s left thumb. It isn’t quite as responsive when typing, and can result in missing spaces when word processing, but it does make a much better “Jump” button than a typical space bar. There’s also a switch that does nothing but disable the Windows button; this is to prevent players from accidentally hitting that key and going to the desktop in the midst of a match.

The S.T.R.I.K.E. 3 looks like the number pad is detachable, but it isn't

Some of the pricier gaming keyboards by Mad Catz have a detachable number pad. The S.T.R.I.K.E. 3 looks like the number pad is detachable, but it isn’t. This is just an illusion caused by a similar set of aesthetics. It comes with a detachable wrist rest though, and that’s a little too detachable! It plugs into the bottom of the board through two little slots, but it doesn’t adhere adequately. Even casual typing will cause it to wobble loose, and gamers will probably want to dispense with it entirely.

There’s a handle built into the top of the S.T.R.I.K.E. 3, but it is too small for most people to get their fingers through – it’s still relatively easier to carry the keyboard like this so as to avoid damaging the buttons, but it’s also a waste of desktop space.

The S.T.R.I.K.E. 3 doesn’t have any extra USB ports, or audio jacks built into it, so players hoping to plug in a matching Mad Catz mouse or headset will need a spare port on their PC.

The S.T.R.I.K.E. 3 software was horribly incompatible with the USB switcher

The Mad Catz software that is used to program the extra buttons and backlight has some issues of its own. In this test the S.T.R.I.K.E. 3 was used with a Mac and a PC, and was plugged into a USB hub that switches between the two computers. The S.T.R.I.K.E. 3 software was horribly incompatible with the USB switcher, and the system’s speakers became synced with the “Mode” button on the keyboard, emitting a loud whine that changed in pitch as the backlight changed color.

The ominously-named S.T.R.I.K.E. 3 does have several strikes against it. However it is a reasonably-priced backlit keyboard that looks cool, and has some fun features. The keys are responsive, but firm, and the enamel seems quite durable making the S.T.R.I.K.E. 3 a tempting option when looking for these basic features in a keyboard at this price.