The Issue with Being an Internet Tough Guy 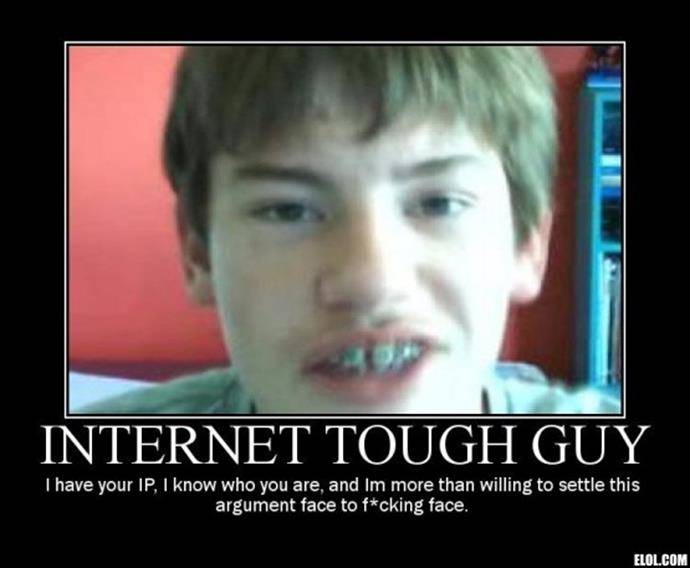 The Internet has spawned a generation of human beings who feel that since they sit behind a monitor and use usernames that are almost impossible to pronounce, that they have the right to berate the opinions of others, including, all too often, journalists and bloggers with whom they don’t agree. The issue is not that these individuals disagree with the author though, but in how they choose to voice their disagreement. Disagreeing with an argument in a civil way promotes constructive discussion, but all too often things quickly break down to a point far beyond logical fallacies.

Here is the reality for video game journalists: if you complain about a lack of summer titles on Wii U, you hate Nintendo. If you questioned why Microsoft thought the Kinect was a good idea, you hate Xbox. If you feel Sony needs to work on more exclusive, AAA titles, instead of re-releasing stuff already available on the PS3, you hate Sony. There’s no middle ground. These people will often take the title of your article and then hunt you down, attacking you through completely separate personal accounts despite not understanding or probably even reading what you’re discussing. They hate you, and why? Because you had the nerve to try to pop their internet echo chamber.

Earlier this week I posted an article about the problems surrounding the Club Nintendo Gold/Platinum rewards. This morning, I listened to a number of podcasters do the same on their weekly shows, and the comments in the threads astounded me. While many agreed, an almost equal amount called these individuals ungrateful, haters, and worse. I received an angry tweet from a Nintendo fan this morning telling me to stick to Xbox and Sony content, and to leave writing Nintendo articles to ‘real’ Nintendo fans.

Do your research people. I have written over 50 articles related to Nintendo content for this website, and my articles are generally always positive. I have a great relationship with Nintendo of Canada, and for the record, they see when I post a criticism.

When an article is written, not everybody is going to be happy. However, it is critical thinking and constructive discussion which ultimately gets things done. When I write my article about Club Nintendo, Nintendo sees it. Do you really think Microsoft just decided on a whim one day to release an Xbox without Kinect? Of course not! They reacted to the fans, through the media. Without articles from journalists, fans have minimal platforms to express their concerns.

Here is a fact: Nintendo probably won’t read your Tumblr rant, but they will definitely read my article. And all the articles sent to them, and they’ll probably even look at the comments. A well argued point, discussed with the author and other users, will make a much bigger impression on a PR person than a three word dismissal based on your console of choice. These companies want constructive feedback, and hero worshipping a corporation or attacking people who disagree will get you absolutely nowhere. It certainly won’t get you better bang for your console buck.

Next time you read the title of an opinion piece or the first line of a comment, hold your knee-jerk reaction. You’re not talking to “the internet,” but a real person, with real thoughts that are just as valid as yours (more so if all you’re doing is jumping on the defensive). Examine the article, the argument, maybe even familiarize yourself with the writer, and then make your judgement. Most professional websites will not allow a non-Nintendo, Xbox, or PS4 user to write articles about things Nintendo, Microsoft, and Sony do. For the most part, fans are writing these articles, regardless of their tone and opinion. Together, media and gamers alike can help shape the industry in a positive way.