From the press start screen, the first time you load Contrast, you’ll instantly be taken to a place, a time, an atmosphere. The noir-esque art style and jazz era cabaret sparks a feeling that this game does so well throughout. It’s odd, stylized, innocent, just like the characters you’ll meet. In Contrast, the developers have created something that’ll surprise and entertain.

It’s only when the music stops and the gameplay begins that things stop being as great as they could be.

There are two different aspects of Contrast. One encompasses the music, the atmosphere; the other is the actual gameplay. The former is excellent. The graphics, while not the best you’ll see on your launch console, are stylized to perfection, and the playfulness between light and shadow works excellently. That’s an important feature throughout every part of Contrast. The music and voice acting hit more or less every mark as well (although there’s an occasional line that doesn’t quite ring true).

Despite the fact that the game itself is rather uninspiring, it still manages to be more than nice

The score is especially good – buy the soundtrack good – and doubly so if you like that style of music.

How each of Contrast’s three most important design elements (sound, sight, story) mix is fascinating to watch. You play as an imaginary friend to a little girl, whose mother is a cabaret singer and whose father is a hopeless dreamer fallen in with a bad crowd. Split into three acts, the plot has you helping the family along, a coming across a few secrets along the way.

It’s a melodrama, suitable to the style, but that kind of comes with the negative of many of the big twists not really being all that twisty. There’s some great scenes, and a few moments that’ll definitely impress, but I might understand why artsy indie types would be underwhelmed. There’s definitely a surreal edge throughout, but it’s not as pretentious as, say, Braid. The plot is told very straight, against a backdrop of surrealism.

The problem comes from the fact that, while everything else is done at least well above average, the game-play itself is fairly standard. You run around solving some not very difficult puzzles. There’s nothing more to it than that.

Let me just stress that again: the transforming into shadow thing is awesome, but the puzzles involving it are so simple, and the exploration so limited that you probably won’t see it as anything other than a means of getting from A to B. The idea of moving cardboard cut-outs into the right order in front of a light so that you can use the shadow line as a bridge is a good one, but it’s over too soon, and then you’re just heading towards your objective. 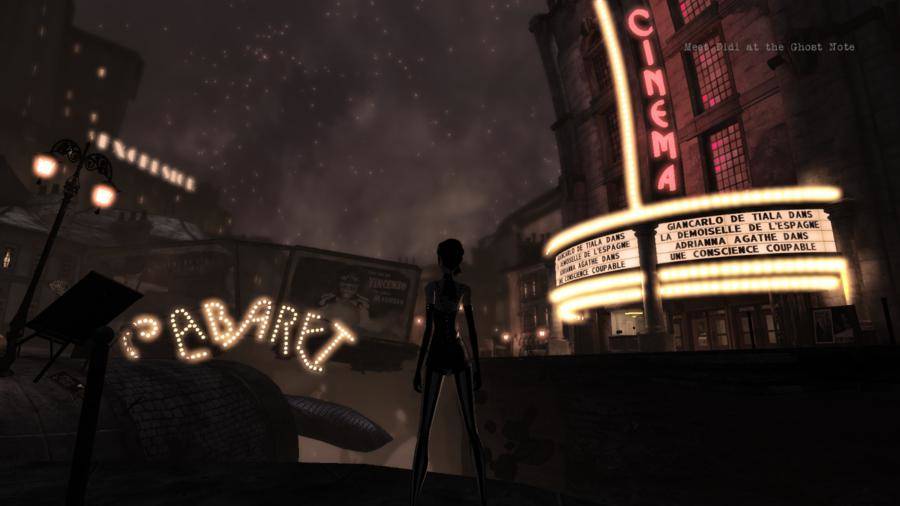 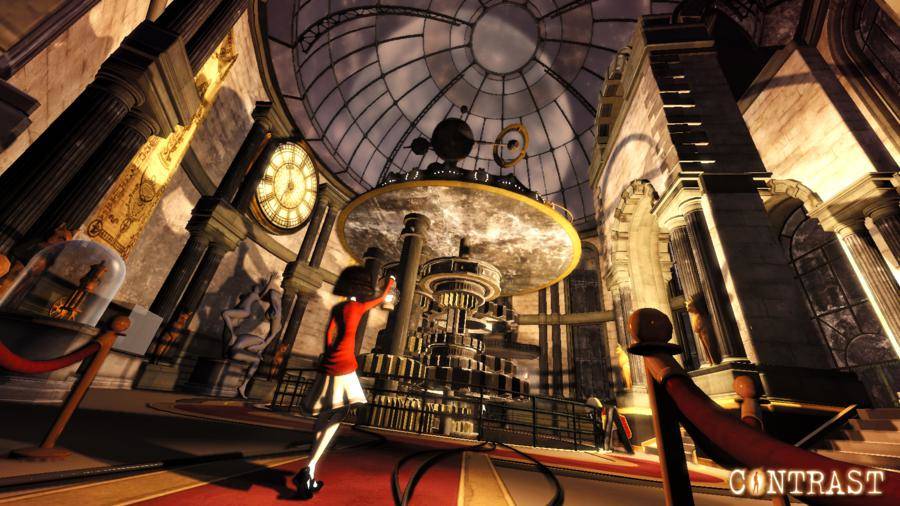 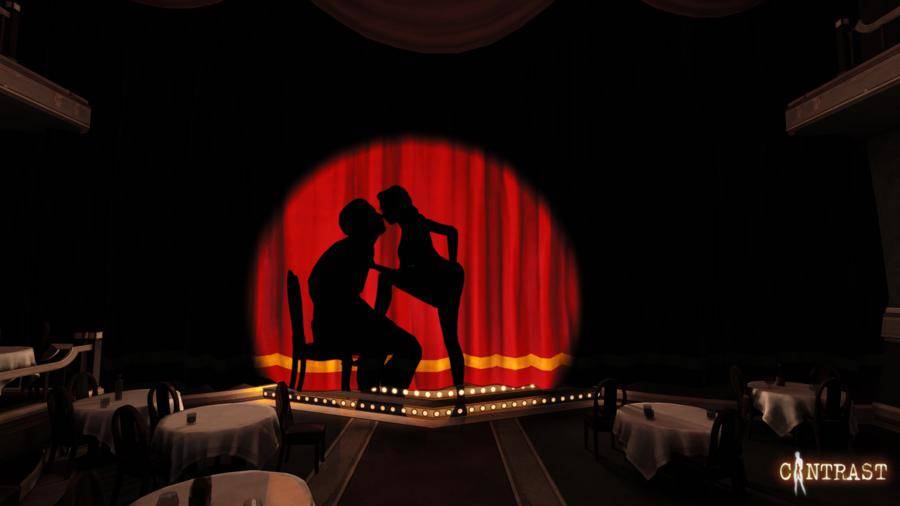 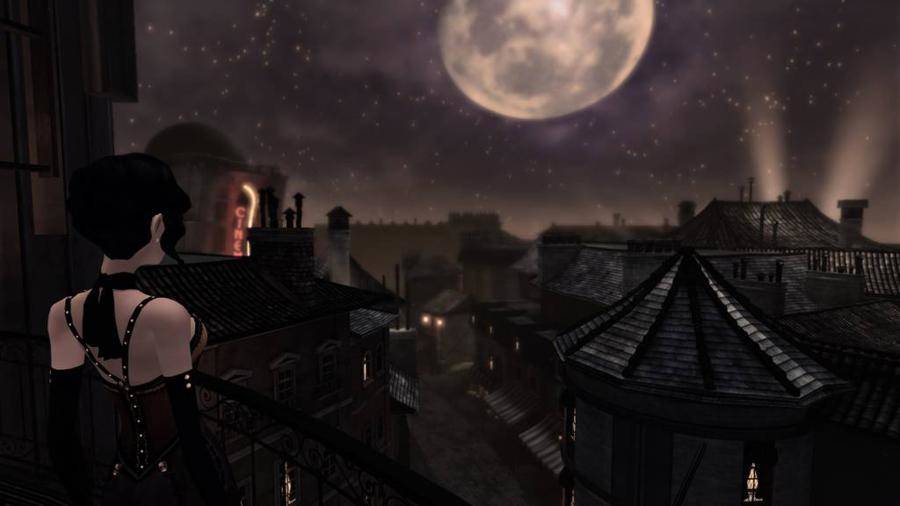 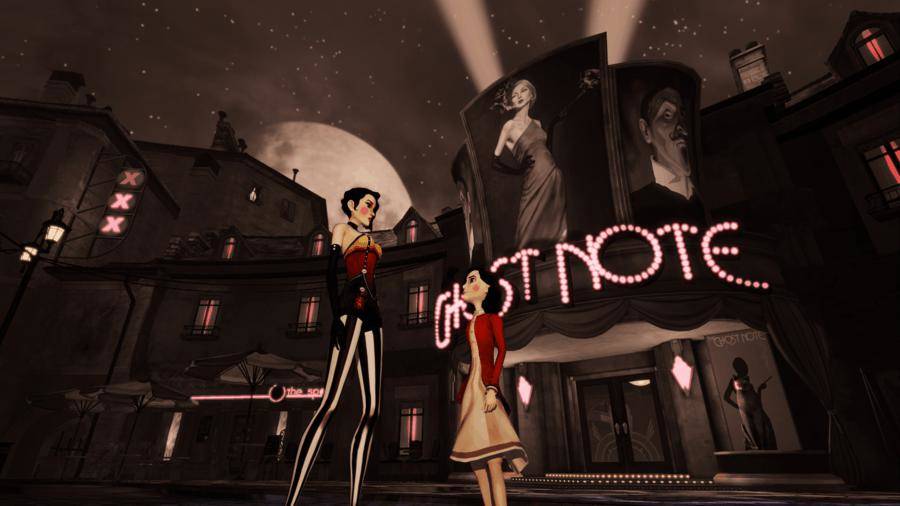 Add to this that, in the three acts, there really are only a handful of mandatory puzzles anyway. Contrast isn’t a long game – someone who knew how to do everything perfectly and was willing to skip cutscenes could probably get through it in a little over an hour – and so the fantastic atmosphere and potentially interesting gameplay is marred by the developers not quite seeming to know what to do with it. There’s also a rushed feel, best demonstrated by the fact there’s so much more to do in the opening act than in the last.

There are a few additional scenes you can hunt out, and a bunch of stuff to collect, but a lot of it (if not all) you’ll come across in your first play-through. As a result, the replayability is going to be next to nothing.

What’s in a Song?

And yet, despite the fact that the game itself is rather uninspiring, it still manages to be more than nice. It’s an enjoyable play-through, so long as you only play it once and don’t spend too long with it. With parameters like that, you need to ask yourself if you want to actually invest money in such a short experience. As a PlayStation Plus title, it’s fine, and it’ll almost certainly raise a smile.