Thief, developed by Eidos Montreal, is a reboot of the beloved 90s first-person stealth series of the same name. Penned by Ken Levine, who would go on to create Bioshock, and forged by the now defunct Looking Glass Studios, 1999’s Thief: The Dark Project was the birth of the first-person stealth genre. It successfully introduced several innovative mechanics, like the clever use of light and sound as an integral part of game play, and told an intriguing narrative in the process. The original trilogy is often heralded as being a paramount influence for games such as Hitman and Dishonored.

Eidos attempts to revisit the series’ glory days with Thief, but in the process fails to take advantage of what made it so great in the first place. The 2014 reboot tries its hardest to pay tribute to The Dark Project, but everything it does is plagued by poor execution. It’s a game that absorbs the worst aspects of 90s game design, and leaves out the best.

Now one of the best features of the original games was their main character, and that very same protagonist, master thief Garret, makes a return here. But he isn’t as compelling as he once was. Garret is a serviceable main lead that never develops into someone more fascinating. He’s a thief that expertly absconds, and takes pleasure in his natural talent. But that’s about it. I never felt obligated to care for Garret, and the game’s story never manages to distinguish him. He is also surrounded by even more mundane characters than himself. They’re all typical, derivative, and poorly acted. And the story starts out as expected, with Garret going up against avaricious individuals. Thought it eventually introduces an original story concept, it fails to do anything interesting with it.

It’s obvious that a sizable chunk of the game’s story, characters, and setting were directly influenced by Arkane Studios’ 2012 title Dishonored, a game that was also inspired by The Dark Project. But everything Thief tells and shows, Dishonored does four times better. Dishonored also contained a visually pleasing and distinct art style. Thief, on the other hand, spews out a much more uninspired art direction. The enemies all look alike, (who also spew out painful voice-acting and dialogue), and almost every single character, besides Garret, all look laughably ridiculous. Garret is at least visually distinct and uses interesting tools at his disposal, like his technologically advanced bow and arrow. 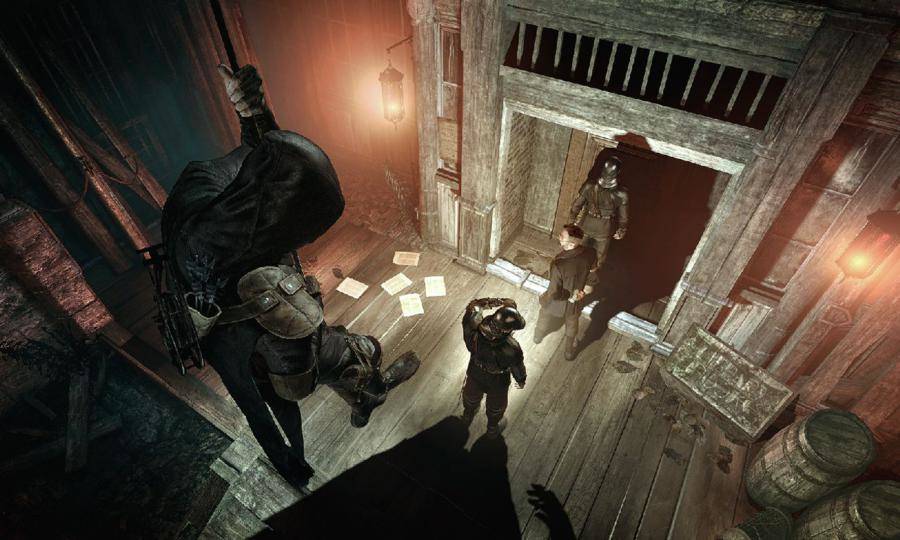 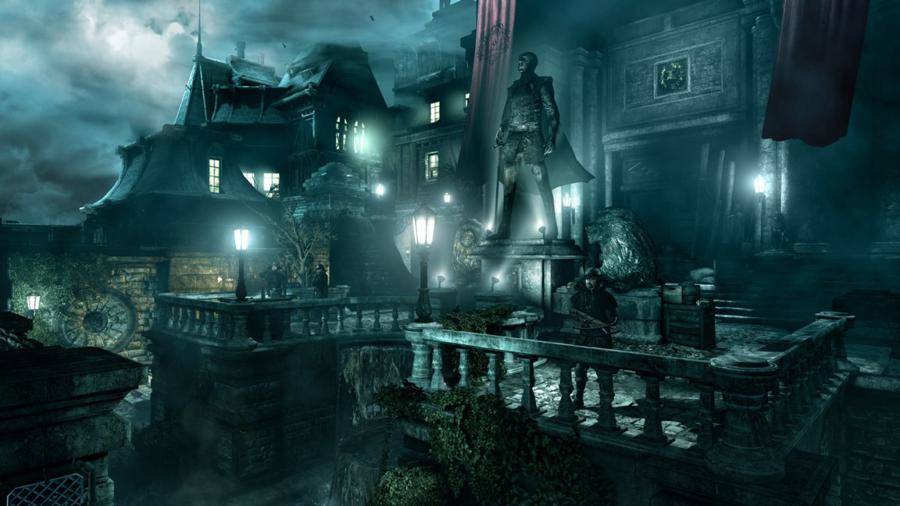 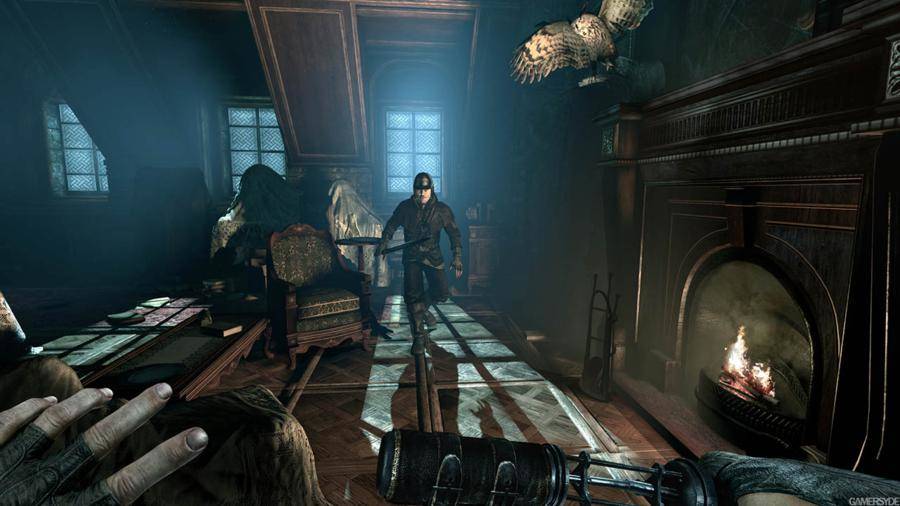 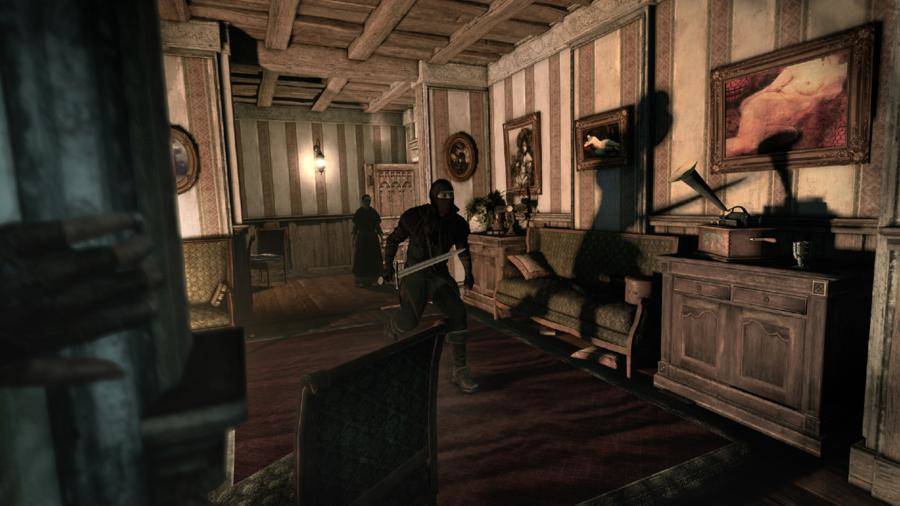 On a more technical level, Thief looks good. It’s one of the better looking titles on the PS4 and Xbox One, and expectedly looks striking on PCs, all running 60FPS. I encountered a few frame rate issues however, but they weren’t bad enough to take me out of the experience. The same can’t be said with the PS3 and Xbox 360 versions, where a dip in performance is a lot more evident. The frame rate often drops, and it only runs on 30FPS here. But the transition from game play to cut scene is jarring, mainly because the cut scenes all look awful. They’re terribly developed, and they stand out in an otherwise good looking game.

The game largely takes place in ‘The City’, a Victorian-era city with steampunk aesthetics. Unlike the game’s characters, some of its settings, especially ‘The City’, all look striking. They’re all brimming with personality, and it’s noticeable a lot of care went into creating these environments. But unfortunately, and this is a common theme with Thief, ‘The City’ has shocking level design. Navigating in it is a complete nightmare. There’s no sense of direction at all, and is made even more severe with the god-awful map that fails to clarify your exact location. Every single street, corridor, and alleyway are all made to feel the same because you can’t successfully track your movement in ‘The City’.

Another major thing that prevents you from simply exploring the environment are the load times. Yes, the game is absolutely plagued with them. They’re like an uncared for disease that makes its presence known every 15 minutes. ‘The City’ is divided by them, and all take about thirty seconds-to a minute to load. Their presence is felt throughout every single level as well. I couldn’t enter a different area without hitting a load screen. This is one of the major aspects of legacy game design that unfortunately carries over here. It’s made even more egregious considering the fact that the game runs on two relatively new, high-tech machines in the PS4 and Xbox One.

The way the game is paced might also be another aspect of 90s game design. Thief’s main storyline is divided into several chapters that are all set in unique locations. The player gets graded, statistically, at the end on how they performed in each chapter. Whether that’d be if they opted to take a more deadly approach, eliminating all that stand in their own, or safely avoiding combat all together, quietly staying hidden in the shadows. These stats also tell the player what percentage of items they were able to loot, and how long it took them to finish each level.

This is directly taken from the original Thief games, hence the 90s game design. But unlike the egregious load times, this type of ‘report card’, for lack of a better term, adds replay value. Players will be encouraged to repeat a level again, and try even better the second time around. Thief has four different difficulty settings, but I found playing on normal challenging enough for me. But for stealth genre experts, they can customize the difficulty settings to their liking, making the game as hard as humanly possible.

As I mentioned before, some of the locales Garret visits are all particular and fun to play in. Whether it’d be a haunted Asylum, a brothel with hidden secrets, or a mansion fit for a baron, they never feel out of place or boring. These levels, and ‘The City’ as a matter of fact, are littered with priced items that Garret can loot. Most of them all look the same and are immediately exchanged for money, but a slight potion are unique and are added to Garret’s personal collection at his hideout, for your viewing pleasure.

Garret can purchase a variety of upgrades using the money gained from looting items. Stronger armor, lighter boots, and some new tools that can be used to access hidden areas are amongst the upgrades. Garret has the focus ability, which allows him to spot important objects in the environment and move very quickly for a few seconds at the push of a button. This ability is time constrained but can be strengthen as well, you just need a few coins.

These upgrades all come in handy when it comes to the game’s main game play mechanics. As should be well known already, Thief is predominantly a stealth game, and Eidos Montreal really only wants you to play it that way. Every single level is designed in such a way that blatantly forces players to stick to the shadows. The enemy AI is predictable, as it should be in a stealth game, otherwise we’ll all have a frustrating time avoiding being spotted. The use of light and sound, which The Dark Project introduced back in the 90s, is an integral mechanic here as well.

Garret can be harder to spot when he sticks to darker areas, and he can diminish light sources with his bow and arrow. The bow and arrow is Garret’s main weapon and has a variety of different arrow tips for use. The water arrow is specifically used to take out torches, fireplaces, etc. Other types, such as an explosive arrow, is obviously made for combat. Such arrows will cause a lot of sound, which should be avoided if you want to remain hidden. The more you run, the more you step on well-placed glass (which is a bit ridiculous really), and the more you use your bow all contribute to the amount of sound being made.

They’re smart mechanics that help breathe life and add depth in a stealth game, especially one like this. It makes the game more fun and engaging. Determining at what time you should fire your arrows, what type of arrows you should use at any given situation, and where and when to move around makes the experience that more challenging than it already is, but in a good and smart way.

But not only is the focus on light and sound an encouragement towards stealth, but the poorly developed combat is as well. It becomes a necessity to avoid conflict at all times because using Garret’s bow or club, (which he uses for close combat), to fight enemies is just painfully bad. The bow is a sluggish piece of equipment that is more of a stealth mechanism than anything else. Garret’s close-quarter combat skills are fit for a thief, he simply can’t fight. Using his club all comes down to pressing the right shoulder buttons repeatedly, which is tedious.

This is something Dishonored excelled at, yet again. It provided the player the option to go guns blazing or to quietly sneak around, without either option feeling poorly executed. Allowing for both options to exist also attracts different kinds of players, and a game like Dishonored can avoid feeling banal, prosaic, and frustrating for some players. Sadly, Thief fails at this too.

Eidos Montreal did try its hardest to deliver a fresh experience for players and to offer something different on the market. There isn’t a lot of stealth games out there, and Thief looked like the type of game to revive the genre: a visually striking reboot of a beloved franchise. The game is filled with good ideas, but it’s poorly executed. Instead of being a breath of fresh air this year, Thief sadly succumbs to being an anomalous final product. And that’s a real shame.