Metal Gear Solid V Ground Zeroes has all the makings of a very good game. An interesting beginning that has you waiting for answers, gameplay that goes beyond what you expect and offers depth and choice, all with the kind of production value that big budget movies wish they could approach – that’s Ground Zeroes, a checklist of what all interactive entertainment should strive to achieve. There’s only one major fault. The game Ground Zeroes should be is still at least a year out, if we’re lucky, and what’s on offer here doesn’t even begin to scratch the itch it causes.

There was a time when Metal Gear Solid V was a pipe dream. Just after Guns of the Patriots, and before the announcement of Peace Walker and Revengeance, it was very possible that Snake and Big Boss would be permanently put to rest. Thankfully, the Metal Gear franchise is more active than it ever has been, with a overall quality that die hard fans will tell you has never really dipped.

The game Ground Zeroes should be is still at least a year out, if we're lucky, and what's on offer here doesn't even begin to scratch the itch it causes

With a new set of hardware – this is the first Metal Gear to release since the availability of the PlayStation 4 and Xbox One – comes a whole new engine, and a set of stealth-based moves we’d never have thought possible a decade ago. This isn’t Shadow Moses. It’s a whole new ballgame.

Snake – formerly Big Boss, until he ditched his title – is more capable than ever. He can sprinter, swan dive and roll around on his back. These might seem like minor improvements, especially considering these are all features of many a shooter, but really it’s an indication of where the Metal Gear franchise is going. Ground Zeroes offers new ways of moving because it wants you to use them, because you’d need those extra options. The guards are smarter than they have been in the past, and they’ll do everything they can to hunt you down.

This is great news for everybody, no matter how you play. Stealth is more exciting; you’re constantly looking over your shoulder. The feeling in the pit of your stomach when you see a guard walk a little too close to you in previous games is now a constant companion. Your opponents can see further, will try to find you more effectively and are less easily fooled. It no longer feels like you can just avoid the guards with quick moves and muscle memory – now you need to think.

On the other hand, if you fancy running through the compound, guns blazing, the action has been improved as well. If you’re spotted, the world will slow down for a few seconds, giving you a chance to silence the person that saw you. Sounds too simple, right? Wrong. Only if you’re spotted by a lone wolf in plain site, close by, is shooting out the guard that spotted you a viable option. Else you’re going to get another guards attention, and then you’re going to have to fight. It’s a nice feature though, and gives you a chance, however small, to correct your mistakes. 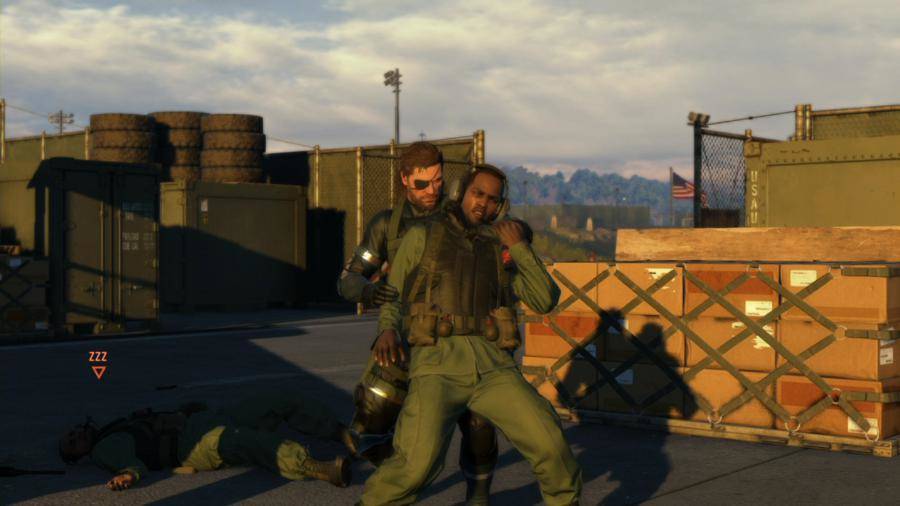 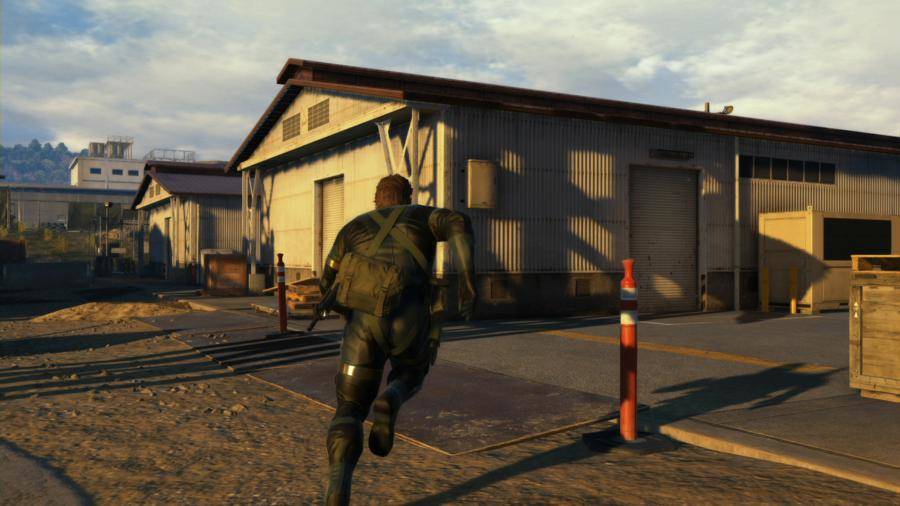 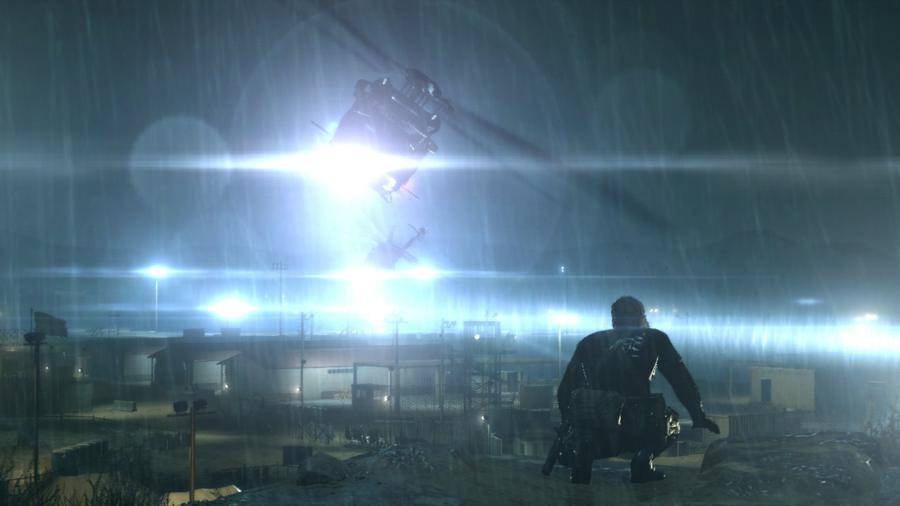 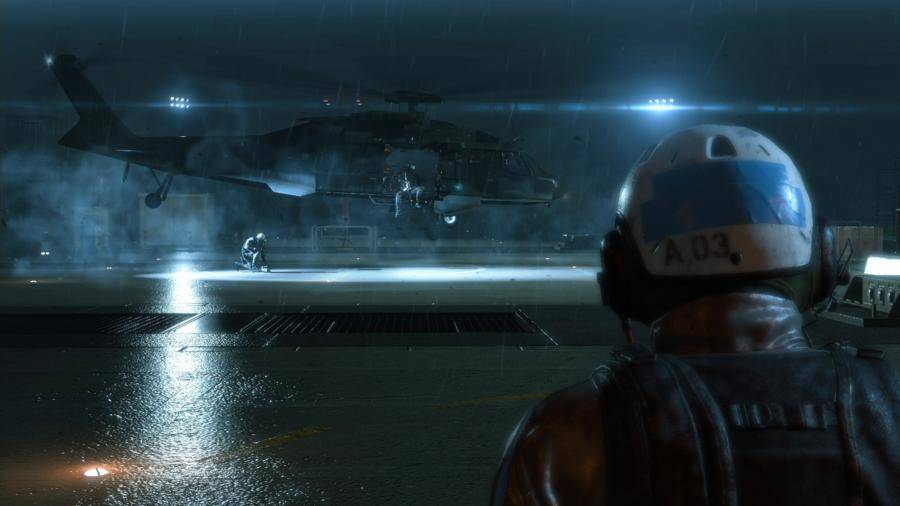 If you miss your opportunity, the alarm will sound and guards will be send to the area you were last seen. Take cover and start shooting, if you choose, until you get the opportunity to escape, or just run and try and slip into the shadows – being able to decide what you do in situations like these has always been one of the key parts of the Metal Gear experience. Only now the shooting is sharper and more realistic. No sniping a guard from a mile away with a tranquillizer gun, or at least not unless you’ve earned that shot.

Exploration is the key to finding new, better weapons, and there are several stashes around the base. Weapons aren’t especially interesting, a rifle is a rifle after all, but gaining access to the different play-types each weapon offers is a huge part of the limited replayability. Exploring will also let you find new ways to approach things, again depending on how you choose to play.

In an early scene (I say early scene, there’s really only two to choose from anyway), Master Miller tells Snake that the mission should be completed as quickly as possible. The irony will make you cringe, considering the reaction there’s rightly been to Ground Zeroes’ length. It could have easily been a demo. I finished my first playthrough in an hour, blind, and with a little exploration.

Ground Zeroes isn't an adequate display of that. Sutherland has probably less than fifty lines, and most of them are either short and sharp during an action scene or are whispered

When I say that this game consists of literally one mission, that’s what I mean. You must go to two places, rescue the people that are there and then leave. It can be done in seven minutes. The start and end cutscenes, with one small exception at the end of the latter, have previously been used in their entirety as trailers. There’s no additional story, very little in the way of character development and not much chance to hear how Sutherland does in his new role. Quality is important, but in this game a little more quantity would have been nice.

You might have heard that there are some post-game unlocks, and that’s true. A series of missions are unlocked once you’ve finished Ground Zeroes, and these are a nice distraction for a while. Forget that you’re in exactly the same location and that guard placement is practically identical, it’s nice to be able to revisit and try out new things, with new objectives. It’s not as addictive as it feels the developers would have liked, but it’ll easily take you three or four hours to play through every mission.

Then you have the option of replaying everything. This is supported by the constant unlocking of new weapons on a mission-by-mission basis, and by the inclusion of a hard mode. If you’re the sort that loves to see everything there is to see, to hunt out Easter eggs and spot secret conversations, there’s plenty of opportunity for that. That should take you another couple of hours.

By this point, you’ve probably found all of the hidden XOF badges. There are two kinds of collectable in Ground Zeroes: XOF patches and cassette tapes. Cassette tapes are often part of the story and only a few will give you trouble, while the badges are a little harder to find. The big exclusive DLC that Konami were touting – on PlayStation systems it’s the PS1-inspired Deja Vu – is locked until you find all of the patches. And unlocking it is hugely underwhelming.

Again, set in the same place with barely any new resourses, Deja Vu tasks you with recreating scenes from Metal Gear Solid. Except it doesn’t, not really. The scenes are already made, you just need to approach them from the right angle, or while doing the right thing. This is made worse by hearing iconic lines uttered by the wrong Snake. This is the only time that you’ll really get a chance to dislike Kiether Sutherland’s performance, as it’s so unlike the originals that it sticks out.

The trophies have you completing each of the missions in specific ways which can be quite challenging and adds a little life to it all. But at this point you’ll have explored this base a dozen times, and it’s lifeless. Unlike Big Shell or Shadow Moses, which you could wander around for hours, the Ground Zeroes location feels empty, despite there being forty guards wondering around. You’d need to have really enjoyed your short time in the original mission to get this far without fatigue setting in, and you still won’t have gotten your money’s worth.

A lot has been said about swapping out Snake-stalwart David Hayter and replacing him with 24 star Kiether Sutherland. Was it the right thing to do? Was it fair? Can he hope to hold a candle to the well-loved actor that preceded him?

Again, when The Phantom Pain comes round and offers up a little more variety, I'm sure it'll be great

Ground Zeroes isn’t an adequate display of that. Sutherland has probably less than fifty lines, and most of them are either short and sharp during an action scene or are whispered. Almost everything you hear will come from Master Miller, whose voice is still provided by Robin Atkin Downes. There were a few moments where I felt Snake wasn’t really coming through, but that was largely because I’d played for an hour without properly hearing him speak.

The biggest problem with it so far seems to be a complete lack of direction. Kiether Sutherland is playing, unsurprisingly, Kiether Sutherland. Konami have probably played an awful lot to be able to put his name on the box, and they’re not going to pretend for a second that it’s not him. Boss has suddenly lost his trademark growl, a small thing that would have gone a long way to bridge the transition between actors.

We’ll have to reserve proper judgement until we see The Phantom Pain. Sutherland will get far more opportunity to show off his acting chops then. Until that point though, his place in the Metal Gear franchise might be off, but his performance was just fine.

One thing that wasn’t just fine, however, was the weather. In fact, it was absolutely chucking it down. The Fox Engine is capable of producing a variety of weather types, and across the variety of missions you’ll see both pouring rain and boiling sunshine. The graphics under both circumstances are excellent, mindblowingly so for a game that’s cross-gen. It’s especially worth mentioning the lighting, which really comes into its own when there are shadows to hide in and search lights out to get you.

While we did spot occasional slow-down, things actually ran incredibly smoothly for the most part, and the multiple trips around the base were very enjoyable from a visual standpoint. Again, when The Phantom Pain comes round and offers up a little more variety, I’m sure it’ll be great.

Buying Ground Zeroes is akin to picking up the first chapter of a really good book, paying 50% of the usual RRP knowing full well you’ll end up purchasing the rest of the story at double the price a few months down the line. It’s not all bad news though, the first chapter is repeated for 300 pages, so it almost looks like a full novel, so long as you don’t actually spend time reading it…

And hell, maybe it is a great first chapter, but by the time you’ve seen it from every angle, the clever ideas have rather worn thin, and you might end up questioning why on Earth any publisher would release such an afterthought product. Then you’ll see the receipt sitting on the desk, and you’ll stop asking.