Tomb Raider Definitive Edition fails to offer any sort of substantial additions or changes from the original 2013 release. But its lack of deviation is slightly marred by the better looking next-gen versions of the game. Tomb Raider is still the same thrilling experience jam-packed with satisfying gameplay, fantastical set-pieces, gorgeous visuals, and a likeable main character. It is undoubtedly flawed, most notably with its storytelling and writing, and the multiplayer mode still isn’t worth anyone’s time, but Tomb Raider is a great new beginning for a once fledgling franchise.

The fact that Tomb Raider did lose its touch over the years was a painful realization for everyone. There’s no denying the series’ relevance as it did introduce a plethora of innovative mechanics back in 1996 and influenced its genre, and its respective titles, in a dramatic way. One just needs to take a look at the first Uncharted, a 2007 release, for a prime example. Developer Crystal Dynamics was tasked with breathing much needed life into the series, and they did a pretty good job. Tomb Raider is a third-person action-adventure game that demands its players’ attention from the very beginning, and is satisfying enough to keep them interested the whole way through. Its main character, Lara Croft, is a great reason why.

It’s an origin story for Lara Croft, and that facet directly shapes how the game plays out. Lara is a likeable character, one that you feel for. She’s innocent, she’s painfully unskilled in combat, and pleads for guidance in life. The game’s opening hours, however, come out as rather puzzling and poorly handled. Crystal Dynamics has the challenging task of handling Lara’s first foray into combat here, as she begins to understand what’s at stake (human lives and all), and it’s evident that the studio struggled with this. Lara suffers emotionally and mentally after taking her first life, and there’s a great deal of focus with this particular moment, but she’s almost immediately tasked with killing off dozens upon dozens of enemies. It’s a contradiction that builds a strong case for the ludonarrative dissonance argument being thrown around. But luckily, this narrative flaw slowly diminishes as you progress through the game, mainly because Lara eventually acknowledges her savagery.

The combat here is probably the best I’ve experienced in the third-person action genre. Each weapon is fun to use and they’re upgradeable, and the upgrades drastically change how each weapon performs. The bow and arrow easily became my personal favorite, and aiming with it is a treat. Another great aspect with Tomb Raider, and this ties in with the weapons, is the Metroidvania influence. Lara gains new abilities, equipment, and weapon modifications that allow her access to her certain areas in the game that she couldn’t have visited before. This subtlety adds to the feeling of playing an adventure game and infuses a bit of nostalgia.

Platforming here is another crucial facet that fortuitously becomes the highlight sometimes. It’s just plain fun to climb walls, jump on ziplines, and endure platform-inspired set pieces with Lara. Tomb Raider introduces a smart cover mechanic where Lara automatically hides behind objects, with no need to push a button. It feels more organic and impressive on a technical level. The enemy A.I. was another pleasant surprise. Enemies cleverly take cover, engage in combat, and flank Lara whenever possible. The only downside here is that there is an absence of enemy variation. It could have eventually become a mundane task to encounter them, but that’s avoided due to near perfect combat.

Lara can learn skills by gaining enough experience from fighting enemies, discovering collectables, and hunting animals. While there isn’t enough range of skills that Lara is able to learn, (most of them are as subtle as having a different kill animation with a particular weapon), they are still a welcomed addition. As just mentioned, Lara is capable of hunting animals. The mechanic is introduced in a dramatic way, indicating that it’ll be an imperative feature in the game, but it never becomes anything more than a superficial distraction. Its lack of importance is made even more disappointing due to the game’s unique island setting. 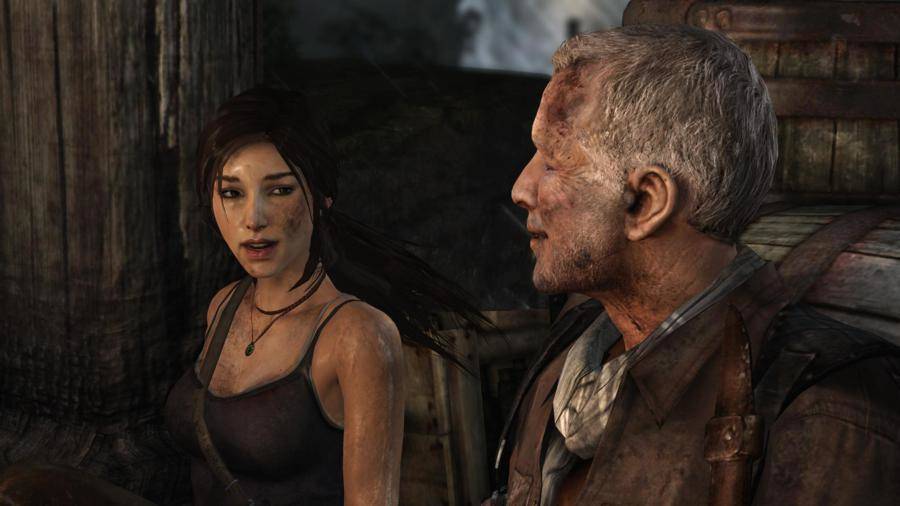 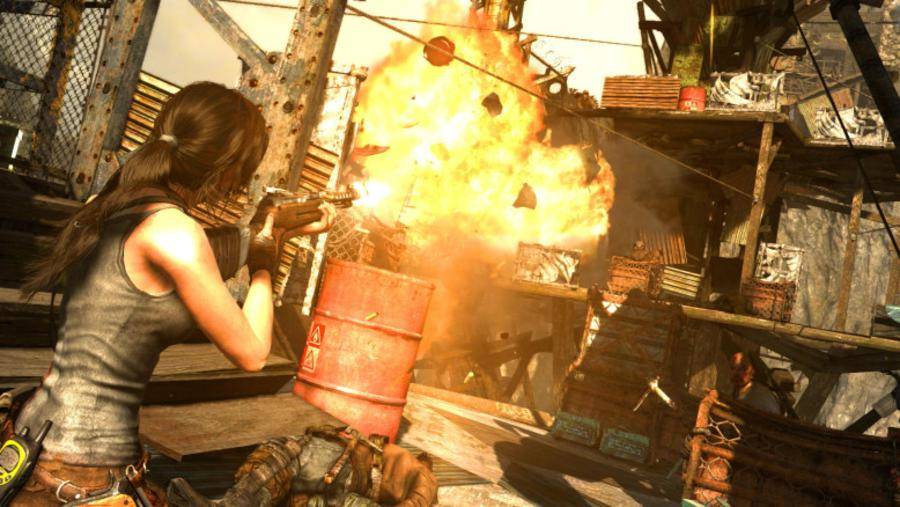 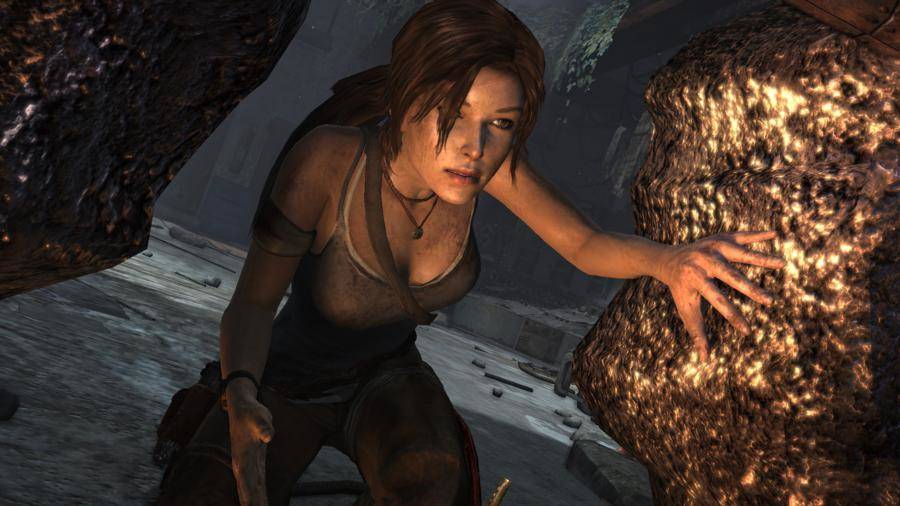 And this island, called Yamatai, is an outstanding framework for exploration. It’s a sumptuous setting that pleasantly surprises with its diversity. It’s littered with collectibles, whether it’d be the more generic GPS caches, or the detailed artifacts that Lara gets to examine. Tomb Raider is surprisingly almost like an open-world game. You get to fast travel back to the places you’ve visited before and it’s large enough to get lost in. It also treats the player as an adult as it allows players, for the most part, to get distracted and disregard the main narrative. While Yamatai shouldn’t be compared to something like Skyrim, (it isn’t even half the size of it), it’s still a brilliant setting for a third-person action game. Yamatai also contains several tombs for Lara to raid, as the title suggests. They’re all confined to a small room, and they’re rather fast to complete. They severely lack in scope, but they make up for it with their physics-based puzzles, which are fun to complete.

Perhaps the most disappointing thing about Tomb Raider is its poor story. It’s plagued by simplistic and poor writing, egregious characters, and a prosaic final act. Lara and her crew set out on an expedition to discover the Sun Queen on the island of Yamatai and as expected, things go sour. The crew gets dismantled and it’s up to Lara save them and find a way to escape the island. There is a sense of intrigue here sometimes, but the mystery of Yamatai gets distracted by the rapport between Lara and her crew. The characters are just boring and atypical, and the game miserably fails to play up their personalities and importance. The main villain here is also painfully cliché and a far cry from what other games, such as Uncharted, offer with their antagonists. And the conclusion to the story is mediocre at best.

The Definitive Edition, ultimately, fails to argue its $60 price tag. The only major difference with the PS4 and Xbox One versions of the game are the improved visuals. Tomb Raider was already a beautiful game on last-gen consoles, and it’s made to even look better here. There’s a luscious bright color palette, the character models look sharp, and the island looks piquant. And as ridiculous as it might sound, the hair physics are outstanding. The game runs on 60 FPS on the PS4, and only 30 FPS on the PS3. While the full FPS count is a plus for the PS4 version, there isn’t much difference between the two.

You’ll also find an extra Tomb to raid and a handful of outfits for Lara to wear. Nothing spectacular. Most of the extra content comes in the form of the game’s multiplayer, but it should be avoided at all cost. It’s filled with glitches and is frustrating to play. It wasn’t any good last year and it hasn’t changed for the better.

Tomb Raider was arguably one of the best titles last year, and the Definitive Edition is largely the same fantastic experience, with improved visuals. This re-release lacks any substantial additions, but it’s still worth the time. The pulp action genre was brought back to life with Naughty Dog’s wonderful Uncharted trilogy, and Crystal Dynamics added another great title into the mix. Tomb Raider lays the groundwork for a bright future, and here’s hoping it can follow in Uncharted’s footsteps and provide an even better sequel.