Knack perhaps got more attention that almost all the other PlayStation 4 launch titles put together. It was directed by PS4 lead architect Mark Cerny and is Sony’s big non-shooter push for the launch window. Although there have been many things said about Knack – that it’s “kiddy,” too simple – it definitely has its good points. It’s just a shame you’ll see most of them in the first ten minutes.

A Sum of its Parts

If you’ve ever played Crash Bandicoot on the original PlayStation, Knack is oddly similar whilst playing. If you like long linear pathways with occasional enemies to fight, look no further. Each level has what is best described as “pockets” of enemies, in which you’ll be attacked by a set amount of opponents. Fight them, move on.

If you like long linear pathways with occasional enemies to fight, look no further

Whilst Crash was a platform, Knack goes in a different way. It’s a brawler really, without much of a brawl. There aren’t any jumping puzzles and you’ll rarely need to time anything. Fight, fight some more, continue on till you reach the next fight.

In all fairness, you’ll need to take your time with each battle, and so it’s not quite as repetitive as it sounds. You can’t just charge into a fight. The right analogue stick has knack dodge in the direction you point it, and it’s an incredibly important tool. Get hit too often and Knack will explode into a cloud of broken relics. Each type of opponent moves and will attack in a certain way. The AI is simple, although it’ll often throw you a curve ball. You end up never wanting to second guess too much and, if you do, you’ll die an awful lot.

And when you do, you’ll want to scream. I started playing on hard mode and there have been times where I’ve needed to put the controller down and go and do something else. Not, I must stress, because it’s really, really difficult, but because it can sometimes be a little cheap. The difficulty will spike a lot. You’ll have an entire level where you’re fighting weak goblins with two moves, and then you’ll be attacked by an almost unstoppable tank that can kill you with a single shot.

So you’ll struggle through and you’ll die, and every time you die, you’ll be sucked back to the last checkpoint. The checkpoints are dreadful. Some might say that it’s part of playing a difficult game, but I don’t think that’s true. Difficult games should challenge you and reward you for overcoming a challenge. It shouldn’t punish you by forcing you to play 10% of the level again. It shouldn’t make you do entire sections again, sections that perhaps you’re struggling with. It’s incredibly annoying, especially if you have a limited time to play it. 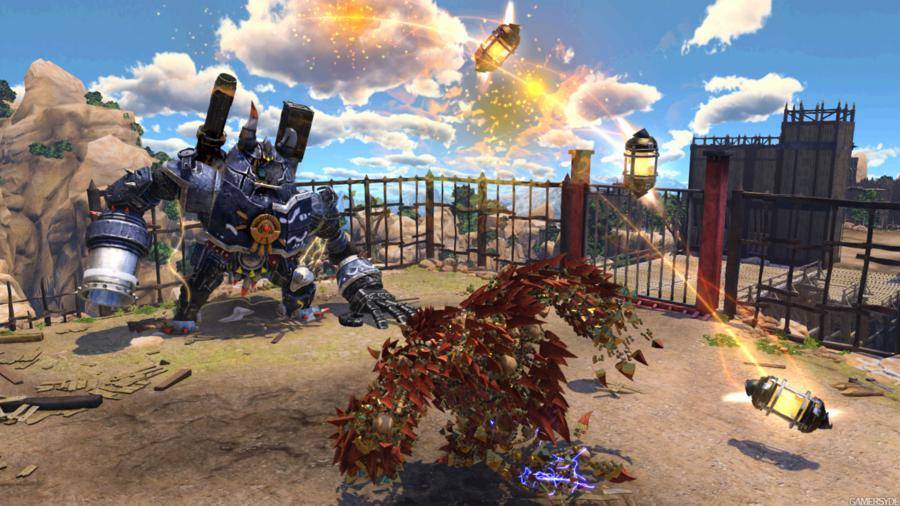 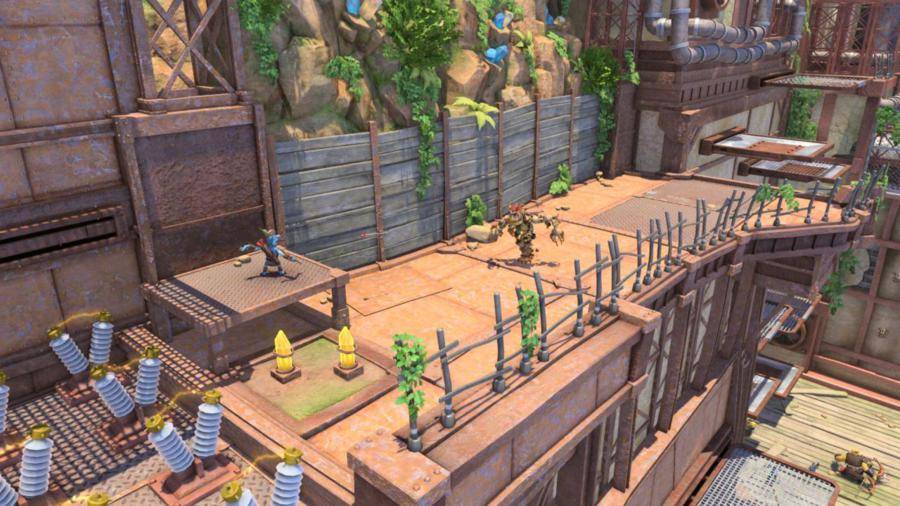 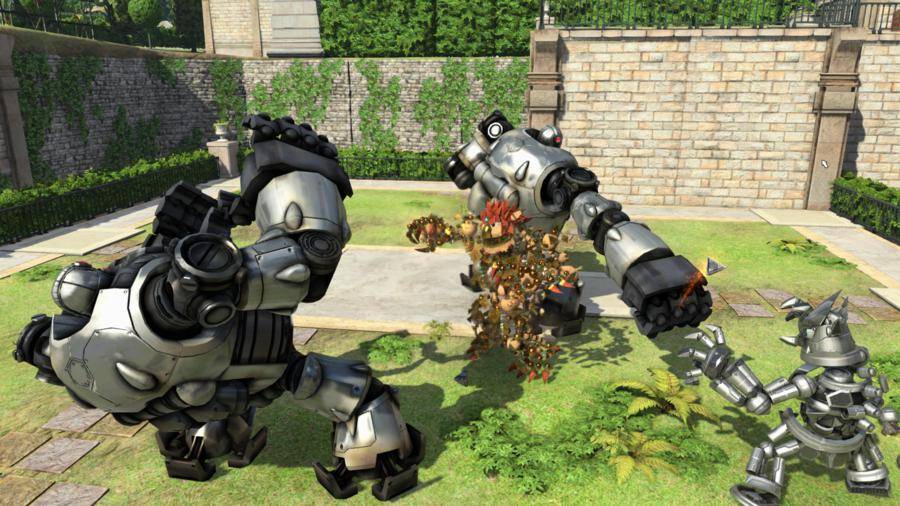 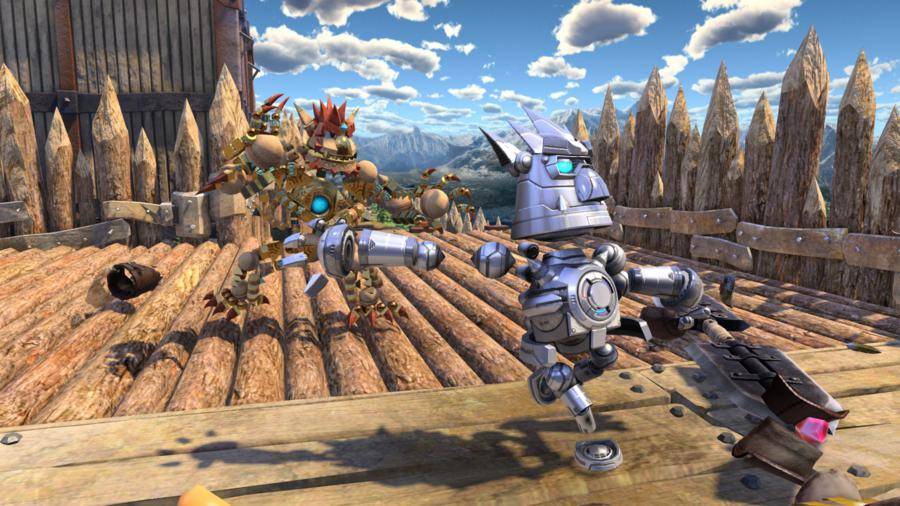 Knack feels longer than perhaps it is as a result of this. The story is interesting enough, although you’re not going to be thinking on it for too long once it’s done. The problem is pacing really, and not just with the repeated deaths. What should be a simple idea – breaking into a fort – ends up lasting for two chapters and seven or eight levels.

And those levels are likely going to feel quite dry. The world is alarmingly empty. It actually makes the whole thing feel rather unnatural. Groups of three enemies hanging around at almost set intervals. You can see all the way forward, with them watching you. It might have worked fifteen years ago, but now it feels odd. With no little bits of wildlife or groups of people running away, it feels more and more like you’re just walking down a long tunnel, interrupted occasionally by a few fellows that were rather inanimate until I came around the corner.

I’ve not seen something so blatantly “gamey,” at least, not in an AAA title, for quite a while.

This extends to Knack himself, who can double jump, dodge or punch. That’s almost everything. This lack of variety becomes fairly obvious about half way through, but it’s not in itself bad. While current games of this kind have use spoiled for choice with weaponry and special moves, having a smaller roster is simply a different design choice. It’s one that may cause you to stop playing, but it’s not inherently bad.

It's worth a play, especially since it'll inevitably be available on PlayStation Plus, but don't go in pinning all your hopes and dreams for next-gen onto it. It just can't hold up to the pressure

Then there’s a few special moves. These, again, are fairly limited. You’ll use them (if only to speed up certain sections), but you probably won’t feel there’s much about them that deserves the “special” moniker, outside of the fact it does more damage.

So while Knack is a fairly straight platformer (without much in the way of platforming…), it’s the visuals that make it stand out. It’s hard to say it pushes the PlayStation 4 to its limit – the occasional framerate drops spoil that one – but it’s a nice looking game, with locations that are bright and beautifully designed. Empty, but you probably won’t complain to look at them.

Knack is equally impressive. All those parts, each which casts their own shadow. It wouldn’t have been possible on the PlayStation 3, a small but noteworthy difference that shows your PS4 IS doing something new. When he dies, he falls apart, each artifact being thrown across the floor. It, again, feels like something new.

The character design is like something out of an early Pixar film – we’re finally at that point – and they move well. There are odd occasions where they’ll get stuck on one another, but for the most part they’re fluid. The only really annoying thing – and it happens enough that it stays annoying – is that you’ll often accidentally walk through things. As a flagship title on a brand new console, your character shouldn’t be able to walk through solid walls.

Talking of walls, Knack, as mentioned above, is pretty much a straight tunnel. Except it doesn’t look that way. More often than not you’ll come across doors that don’t open no matter how hard you hit them and invisible walls which protect even the flimsiest looking barrier. You can’t even jump over low fences, if you’re not supposed to, and that rather spoils the effect of the large cities and open forests.

A special note must be made for the voice acting and music. The former, whilst stylised, works incredibly well and the latter is good enough to warrant hearing outside of the game. Excellently done all round, and one of the few flawless areas of the game.

And that is rather painful to say, because Knack should have been better. It’s a little bit confused, if anything. A game that seems like it would be for children, except which is devilishly tricky at times and painfully unforgiving. A graphical powerhouse that gets the basics wrong. A interesting enough story spread too thin, and made too cartoony.

It’s worth a play, especially since it’ll inevitably be available on PlayStation Plus, but don’t go in pinning all your hopes and dreams for next-gen onto it. It just can’t hold up to the pressure.