In what appears to be a bid to garnish more sales for the aging franchise, Capcom has decided to shake things up in the Resident Evil universe. With four campaigns, multiple playable characters, Mercenaries mode and the all-new Agent Hunt feature, RE6 is positively ripe with content. Gone are the days of puzzle solving in an eerie atmosphere. Now, it’s all about cinematic action and ultra-linear level design. While these changes didn’t hurt sales, the game has received plenty of hate from critics and fans alike. With this in mind, I was expecting the worst when diving into the PC port. Much to my surprise, I found that the naysayers were wrong – it’s actually more unplayable than they claim.

Characters from most every game in the core series are reunited to put a stop to the latest bio-terrorist group threatening world domination. This time the terrorists come equipped with an all new strain of the T-Virus – the C-Virus. This new virus has created a new form of “zombie”, the J’avo, that can adapt to their surroundings, communicate and use firearms. Told from the viewpoint of seven different characters over the course of four campaigns, RE6 is by far the longest in the series. This would have been fantastic, but Capcom did everything they could to make sure the story was presented as mediocre as possible. 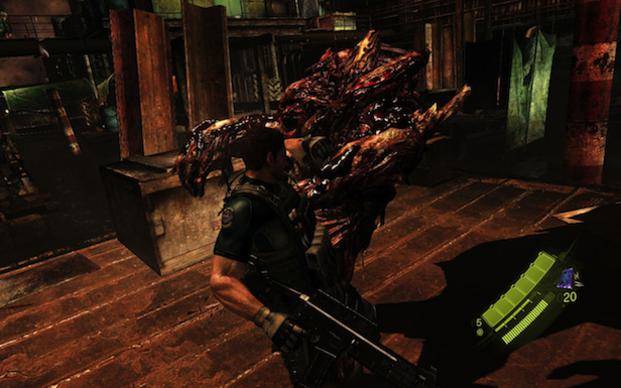 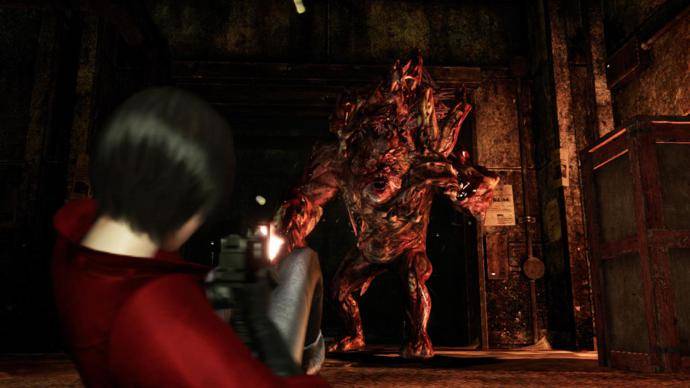 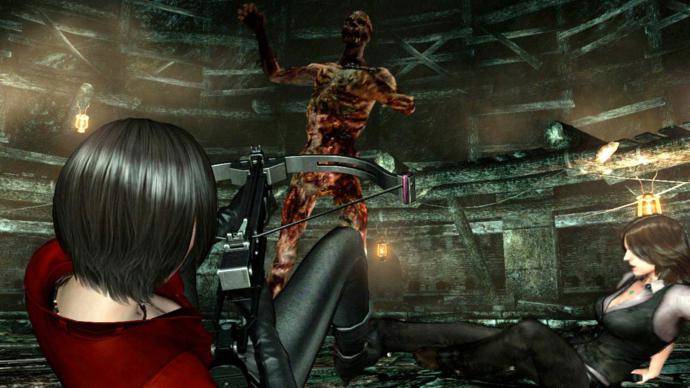 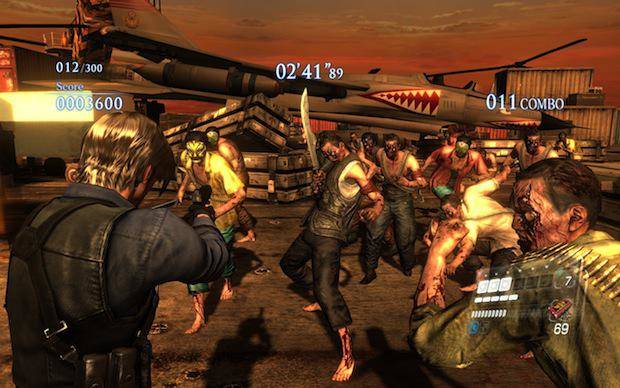 The opening, which begins in media res with Leon and Helena on the run in Tall Oaks, serves as a tutorial of sorts. It also leads the player into believing that Leon’s campaign should be played first. That would be wrong. After doing some digging online, I found that the correct order (well, as correct as it can be) is Jake and Sherry –> Chris and Piers –> Leon and Helena –> Ada. The story is more coherent if played in this order, but it’s still a bit of a jumbled mess in spots. The static characters and forced dramatic moments don’t help things, either. I suppose the campy nature of the Resident Evil series can be fun, but RE6 gets more dull as the story drones on.

Me: “I’m about to die! I need to flee or kill these enemies fast!”

Camera: “Hold up, bro! Check out this killer helicopter explosion!”

If there is one enemy I hate more in RE6 than that brute that harasses Jake throughout his story, it’s the camera. Many of my embarrassing deaths can be blamed on the horrible camera angles. I can understand the desire to make games more cinematic, but doing so at the cost of sacrificing gameplay is inexcusable.

The game mechanics become even more frustrating with the wonky controls that are made even worse with the mouse and keyboard. The default key-bindings are just ridiculous (“2” is crouch?), and because of RE6’s reliance on QTEs, I found myself fearing for my keyboard’s life. The worst moment came during Chris’s campaign while trying to run from a boss. Not only was the camera twisting and turning all the time, but I wound up “crawling” under obstacles instead of “sliding” because of the confusing controls. I quickly switched to an Xbox 360 controller from this point on, but even then I found myself getting frustrated.

Because of the botched controls, the gameplay found in each campaign suffers. Not only do all the campaigns play differently, but most chapters within the campaigns contain design alterations. While this keeps the action from getting boring, the lackluster controls make performing certain actions a pain. Anything that requires stealth, driving or using the awful cover system is a miserable experience. The only bright spot is the new melee combat system, which comes in handy when attempting to conserve ammo.

The only campaign I found notable was Leon and Helena, though Ada’s was alright, too. Leon’s story is the most atmospheric, has some nice puzzles and, if played after Jake and Chris, contains the most drama. At times it tries too hard to be like Left 4 Dead, but overall I didn’t find myself completely despising it.

The reason behind this flawed gameplay seems to stem from the focus on the co-operative and online play options. Co-op isn’t actually that bad, and it’s probably where the game works best. The Agent Hunt mode, which allows another player to “infect” another person’s game by assuming control of an enemy, is also a nice concept and I had some fun messing around with it. Unfortunately, I didn’t find any of this to make up for the rest of the game’s shortcomings.

Visually, RE6 doesn’t look bad, but it lacks polish. The PC version boasts much better rendering, lighting and shadows, but it’s still nothing to gush over. Even the set-pieces that the camera desperately wants the player to see are fairly mundane, though some of the hulking BOWs are wonderfully grotesque. The score gets the job done, but is otherwise hardly worth mentioning. The voice-acting, however, ain’t too shabby. This is definitely one area the series has continued to improve on.

I suppose fans of the series might get a thrill out of playing Resident Evil’s most prominent characters in one game. RE6 can be fun when played a certain way, but the disappointing design decisions make that fun short-lived. With tighter controls and better pacing, RE6 might be a passable entry in the series. As it stands, there is no doubt this is the worst installment in the franchise.

The GTA Trilogy Remaster is Just Wrong – And I Want It