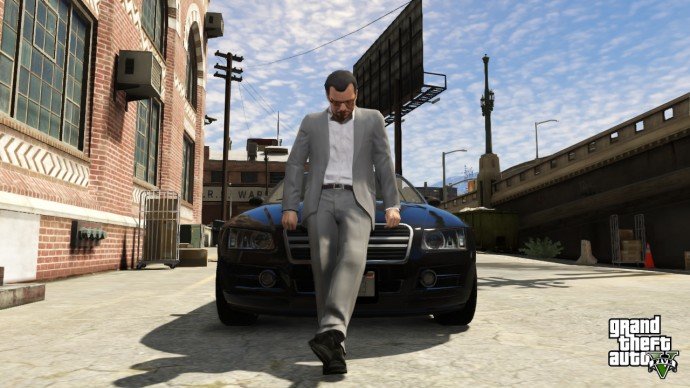 It’s close enough to ten years since we wrote about the announcement of Grand Theft Auto V on this very site, and here we are writing about it again. It has launched for a new generation of consoles and it has done quite well. Taking the top spot in the UK’s digital charts from Elden Ring, GTAV further cements itself as the biggest game of all time. And let’s face it, it’ll probably not be easily knocked from that perch.

Like the remastered trilogy released earlier in the year, reaction has not been mindblowing. They have added a bunch of things to shine up the game, but initial reaction was kind of just “yeah?”

Maybe because we’ve all played it before. Maybe because it’s been teased for a year and ended up looking like Grand Theft Auto V.

But whatever the reaction, it seems enough people were impressed to buy into the experience again. And you can ask why all day long, it’ll never be as interesting to developers as cold, hard cash.

Not that just getting people to buy the game is going to help in the cold, hard cash stakes. Hell, selling the most copies a game ever sold isn’t enough these days.

GTA+ is only available on the PS5 and Series X version of the game. So buy that again, please.

Then on top you have to pay $5.99 a month. In return you get a guaranteed GTA$500,000, as well as properties, vehicles, upgrades, discounts, and cash/RP bonuses, all only available through the subscription. You may also get access to old time-limited events.

Grand Theft Auto Online is a platform. It shouldn’t be – I don’t really understand it – but it is. In the PS2 and PS3 days, when people would buy entire consoles just for FIFA, GTA Online is the modern equivalent. Only it somehow costs more and it somehow changes less.

My real concern with this is how do you make that platform work over multiple games? Look at the issues Call of Duty have had with Warzone in recent years. How does the world of GTA V fit into GTA 6, if at all, and if it doesn’t, how does that shift occur when the new game is released?

There are two jokes there that you may have not noticed. The first is that Rockstar would need to find a solution to this issue. They don’t. They’ll just charge you again, probably launching a Grand Theft Auto 6 subscription alongside the new game and coming up with ever more attractive ways of having you subscribe to everything.

The second joke, if you haven’t already guessed it, is that Grand Theft Auto 6 is ever going to come out. Ha, ha, ha.

Rockstar have become a weird company, and I can’t wait until some of the behind-the-scenes stuff begins coming out. It’s only a matter of time.

Why has it been nearly ten years since the last Grand Theft Auto game? Why were the remasters all in such bad condition? Has Red Dead Redemption 2 really been left to rot on the vine, despite selling 40m copies? No remaster, barely any updates to the online mode, not even a patch to up the resolution…

There are reasons for all this. And we’re more likely to get them leaked by a disgruntled employee than we ever are to play Bully 2. So here’s to that.