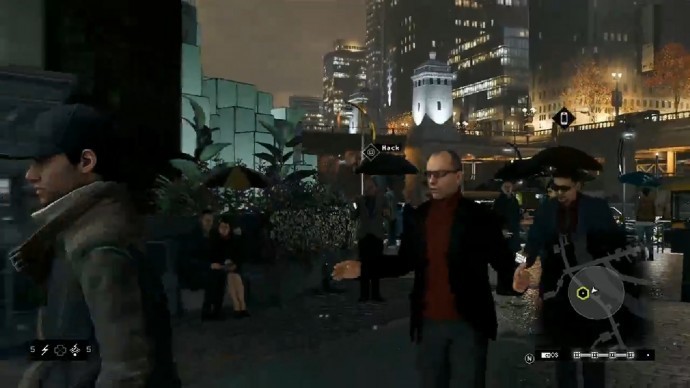 Watch Dogs is a game that you’ll want to have connected at all times, Ubisoft has revealed. Multiplayer will be so subtle that you probably won’t even know you’re in a multiplayer situation until the player entering your game actually chooses to attack, and there’s no limit on the time they might follow you around, looking for the perfect opportunity.

If you choose to play online, your system will be constantly ready to enter into a new network game. Other players will be able to take contracts out on you, and when they accept the job they’ll subtly join your city. You won’t know this is happening. The game will automatically disguise the enemy player as one of the people on the street, and it’ll be up to you to notice an attacker before he finishes his mission. It won’t disturb your story missions – which automatically means you can’t become a target – but at any other time you’ll need to watch your back.

This can only happen as a result of having Watch Dogs always connected to the internet, but don’t worry too much if that’s not your thing. Watch Dogs also works 100% when played offline, you’ll just miss out on a few cool parts of the game.

The blog post also highlights some of the differences between current gen and next gen versions of the game.

“Players are going to know they aren’t getting a bad experience if they play Watch Dogs for the current gen, but the next gen is the real HD experience. You can zoom in another level. You can have better shaders, better simulation on the wind or the water, more particles, better atmospherics… Basically anything you can get with more computing power.”

So have no fear if you plan on playing Watch Dogs on the PS3 or 360. There are no trimmed-down mechanics to make you feel as though you are missing out on the core experience. Watch Dogs is truly a next-gen game – not just in terms of offering cutting edge graphical performance on the next generation of consoles, but also when it comes to the gameplay, the immersion and the seamless online experience.