Rockstar have been too Tight-lipped on GTA V Remaster 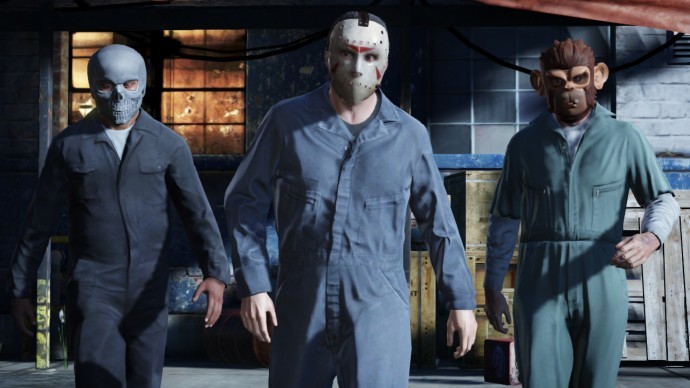 It wasn’t that long ago that Grand Theft Auto V was a mystery. We didn’t know that there were going to be three protagonists or that a huge chunk of the game would basically be an MMO-lite, we’d never have dreamt that the game might feature the kind of soul-destroying violence against teddy bears that it eventually displayed… That was then, and since GTA V was released is has garnered dozens of perfect scores, awards and millions of sales. Everybody who wanted to, almost without exception when you look at the statistics, has played it. So why do we still know next to nothing about the re-release?

Grand Theft Auto was always getting a remaster. It was always going to make its way to PC, PlayStation 4 and Xbox One, no question about it. References to the game were being made in AMD firmware updates around release, and they kept popping up now and again, surefire evidence that something was happening. As the world happily played on PlayStation 3 and Xbox 360, Rockstar slaved away at porting their latest criminal adventure to new formats, all the time telling fans that there was absolutely no plans to do so.

That’s par for the course though. I’m sure I’m not alone in saying that, had I known officially that it would make its way to new-gen consoles, I might have held off buying it at all. It makes sense and, in this industry, it’s not unusual for a company to outright lie to consumers about what they’re working on. “Knowing” that something is happening and being shown actual footage of a much improved new-gen edition are very different things.

And so the announcement at Sony’s E3 conference didn’t so much come as a surprise as it was a relief. Finally we, including Rockstar, could all stop pretending that it wasn’t always on its way. Grand Theft Auto V was coming to PlayStation 4, Xbox One and PC. Fantastic. Less good is that we know so little else about it.

What Are We Buying?

The truth is, Grand Theft Auto V Remastered will probably contain a bunch of new content. The long awaited Heists are almost certainly going to make an appearance, incentive to purchase and play all over again. There might even be bonus missions and characters, extra scenes to entice even the most tight-walleted individuals to revisit with Michael, Trevor and Franklin. Perhaps there’ll even be bonus radio content. Why not? They’d be extremely welcome and would likely boost sales. After all, nobody who releases a remaster wants to see sales drop from 30 million to anything too low. Even five or six million would seem disappointing compared to the original release, even though it’d be nothing but impressive.

But here’s the thing: Rockstar aren’t telling us any of that. They’ve not even given us a vague date. They’ve given us a season, a chunk of 90+ days on which it could maybe, probably, perhaps end up in stores. We’ve had a single trailer which looked great, but was more of an announcement teaser than anything, and then the conversation has died.

It worked for the original release, because people were hungry to find out what was coming. This time around we know almost everything. For the Remaster, GTA V is going to be 95% old game. Dripfeed by all means, but it’s now been a month since it was confirmed and over nine or ten months since we first saw evidence of a PC version. We still don’t know what framerates we’re dealing with, or even what resolutions. There was some vague mention of upping the amount of traffic on the roads, as well as animals and vegetation, but all of that was a given, surely? Same with improved textures. The only other chunk of information shared was that you’d be able to transfer your GTA Online character, and the alternative to announcing that is that people just stopping playing, worried that their progress would be lost.

The ‘hype’ isn’t working. There are people who know they’re going to buy the GTA V remaster and people who know that they won’t. This is the time that Rockstar should be trying to get those on the fence over to their side. It’ll be going up against some of the biggest titles of the year, likely at full retail price. Everything is against it, and yet Rockstar is keeping tightlipped.

GTA will sell, it always does, but here’s hoping that their decision to play games with fans – like they have with the heists and even with the existence of a new-gen version – won’t end up backfiring.