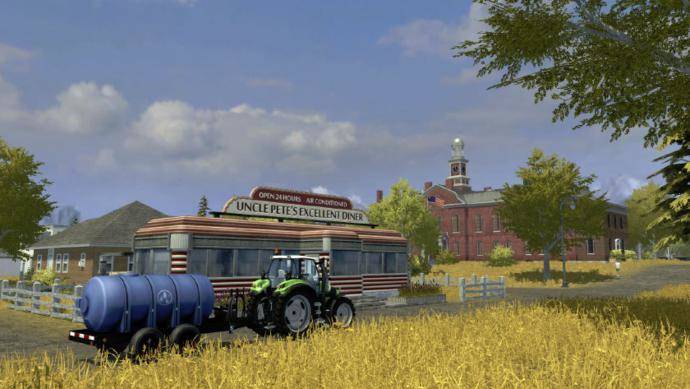 Farming Simulator remains consistantly popular year in, year out, and nobody knows why. Some of the best scientists in the world are on it, many longing for the days of theoretical physics and quantum theory. All they can tell is that people love it, and that a console version – coming this September – is likely to prove once again that everybody is obsessed with tending to crops, husbanding animals (with other animals) and selling off everything we can.

Giant interactive have just released a new trailer for Farming Simulator on PlayStation 3 and Xbox 360. It shows off a variety of vehicles and work tasks, and a bunch of chickens and cows as well.

Within only a few hours of release, the Summer trailer has recieved 27 likes, and has reached the infamous 301+ views. It shows off the new American backdrop, complete with diner and drive-through cinema. Previous games in the franchise mostly focussed on European style farms, so to drive around Anytown, USA might actually be pretty cool.

Farming Simulator is coming to Xbox 360 and PlayStation 3 in September. Farming Simulator 2013, the PC game on which the console version seems largely based, scored a 65 on metacritic, although fans of the franchise were much happier with how things turned out.