Ethan Meteor Hunter is a puzzle platform game by Seaven Studio. You play as Ethan, a mouse given the power to stop time because he was hit by a meteor. The reason for this isn’t explained in the alpha, but perhaps it will be revealed in the full game. Ethan’s mission is to collect bits of meteorites as he makes his way through 50 levels. There is a counter at the top of the screen to let you know how many meteorites are in a given level and how many you have collected. It’s definitely an original idea, at least from what I’ve seen. 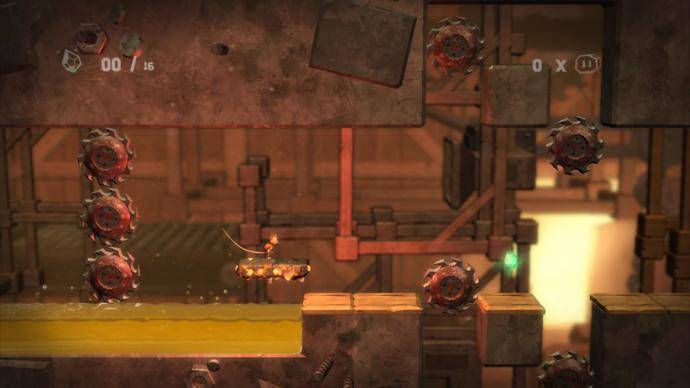 A Break in Time

Don’t let the first few levels fool you. While the gameplay is simple, the levels do get much harder as things progress.

Ethan: Meteor Hunter has an interesting mechanic for puzzle solving. At certain points in a level, you can collect “pause” symbols; these will allow you to pause the game and alter the environment. This sounds very exciting at first, but so far the items you can manipulate are very limited. Usually you can move a box or rectangle structure to help you reach higher places. The game will only provide the exact number of pauses needed to complete the level so you have to plan out your pauses carefully or you will have to restart. Luckily, there are checkpoints so if you fail a puzzle or die near the end of a level you won’t have to start all over again, and I am very grateful for this. And don’t worry; if you mess up a puzzle without dying; similar to LittleBigPlanet there is a button that allows you to restart at the nearest checkpoint.

The platforming itself is decent and the controls feel good. They aren’t as tight as Super Meat Boy but they aren’t as floaty as LittleBigPlanet. Besides the puzzles, there are certain traps to avoid: electrified surfaces, spike wheels, and pools of acid to name a few. There is no time limit so you can take your time while traversing the levels or figuring out the puzzles. However, there are a few levels with the need for urgency such as one that has the acid constantly rising up, filling the whole level. I think adding this element makes the puzzle solving more frantic and exciting. When you pause the game, you will have all the time in the world to place your blocks but the problem is choosing when to pause. I found that I messed up puzzles much more frequently when there was the imminent threat of acid at my tail.

Music was something I found lacking. There was only one track that played in every level and while the song was just fine, variety would be nice. It is something that hopefully will be expanded upon by the time the game is finished. On the other hand, the thing that really impressed me was the visuals. They were clean, polished, and simply good looking. It has its own cartoony style without being too cartoony. The visuals may even be improved further before release which is always a plus.

Overall, Ethan is a pretty decent platformer. From what I played, everything was very polished and I only ran into one bug, which is impressive for a game unfinished (I couldn’t see the steam coming out of the pipes). The added mechanic that stops time while you move objects is quite interesting, but I hope it’s something that will be expanded upon in the future. Same with the music of the levels. While the song doesn’t get annoying, it does become very bland after the fifth time you’ve heard it. Perhaps more music will be added to support the theme and story of the game. And don’t let the first few levels fool you. While the gameplay is simple, the levels do get much harder as things progress. You can try out their alpha version for yourself at Seaven Studio’s website and it is also on Steam Greenlight if you wish to support it. They openly welcome feedback and want you to help shape their game. Keep an eye on Steam Greenlight to see if it makes the cut!