An auspicious photo recently leaked out showing the familiar attire of an Assassin’s Creed assassin aboard a pirate ship with a pistol and cutlass in hand which has led to a lot of not-so-crazy speculation on the internet about the future of Assassin’s Creed IV. This leaked out image has forced the hand of Ubisoft to make light of the situation and tell the world about the upcoming Assassin’s Creed title, Assassin’s Creed IV: Black Flag. They have not confirmed much in the way of details, but have released shots of the cover as well as announced that they will make an official unveiling of the title on March 4th at 5PM GMT to the world.

The details so far are a bit scarce, but it does indeed look like the protagonist from the previous game, Connor, will be a one-and-done character and will stay within the confines of the Assassin’s Creed III world for the time being and that we will move on to a new assassin. This new assassin will be let loose in the swashbuckling world of the Caribbean Islands during a time when pirates reigned supreme in the area. There is a good chance that Assassin’s Creed IV will take some cues from Assassin’s Creed III, which allowed gamers to pilot a ship through perilous battles.

This looks like an exciting new direction for the Assassin’s Creed series and hopefully the new protagonist brings more to the table than Connor did previously and we’ll see less-than ten hours of tutorials this time around. So hold onto your hats until Monday March 4th when Ubisoft officially unveils Assassin’s Creed IV: Black Flag. 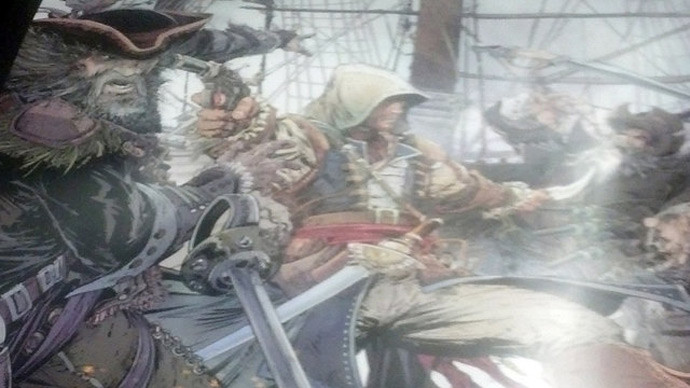