Dynasty Warriors is Everything Gamers Want – Why is it a Punchline?

If you’ve been watching gaming communities over the last few months, you’ll have noticed a mantra of sorts beginning to form. It tends to be some variation on “if you give us what we want, we’ll buy it.” It’s a noble idea, but one that’s not quite true. 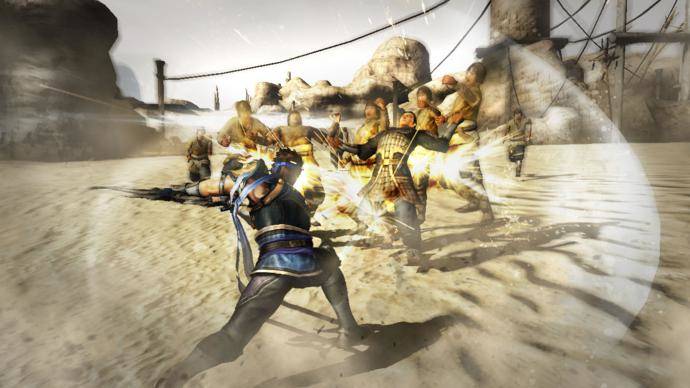 When you look at franchises that do just this – giving their userbase exactly what they’ve asked for – you’ll suddenly realize something. They’ve become industry jokes. From Call of Duty through to Dynasty Warriors, these series tend to be at least relatively successful worldwide, but mention it in polite company (or on gaming forums, anyway) that you enjoy that game and suddenly your taste in games is called into question.

Where does this gap between popularity and general core acceptance come from? Why will someone say that a company should “give the fans what they want” and then insult a company that does just that in the next sentence? Just what’s the joke?

The last generation has seen perhaps tens of different releases, across mobile, digital, portable, console and PC platforms. And you know what? They’ve sold. They’ve sold to a dedicated, hardcore Koei warriors fanbase that always wants more. Koei had dutifully provided, and have been rewarded with profit on each one.

That’s where the gap between buyer and internet commenter begins to form. The buyer knows what they want and buy it when it’s offered. The commenter asks that things be changed with no intention of ever shelling out the cash. Critics also manage to frequently miss the point, as highlighted by this quote from an EDGE interview with Ken Matsumoto from the time of Dynasty Warriors 6.

Sometimes I feel annoyed. Comparing us to Halo, which I’ve seen on one occasion, is stupid – they’re just different. Games are often criticized on what they’re not rather than what they are. People got annoyed with Wii Sports because it didn’t have league tables, or allow you to have a three-wood in golf, or something, and it’s a brilliant game that’s simply not interested in offering those things.

With Dynasty Warriors we might feel the negative criticism isn’t fair, but when there have been a few sequels it’s hard to turn those opinions around. You’ll sometimes read something that doesn’t mention any of the new things in the game, then says it hasn’t done anything new, and you wonder: was it even played for more than 20 minutes? Perhaps people think, ‘Oh, that can fill up half a page’, and just give it to someone who doesn’t know the subtleties of this particular game – and when you get into an iterative series, subtlety is where the value lies.

Dynasty Warriors 6, by the way, caused a mass of fan outrage on a number of levels and many of the systems within it were dumped for Dynasty Warriors 7 and 8. They took too large a jump, their fanbase didn’t enjoy it, so they went back to working in subtleties, resulting in the best games of the franchise.

As Mansumoto said in the quote above, saying that nothing ever changes belies not only a bias, but a wilful ignorance of the situation. It’s the same with Call of Duty. When entire worlds are rebuilt, when stories are completely changed (or at least retold from a different perspective), when entire systems are made or remade things have changed.

You don't need an entirely new engine, you don't even need a new feature or character set. You just need to give the fans what they want.

The basics of running around killing things are the same. By that standard though, Dark Souls, Call of Duty, Epic Mickey and Skylanders are all exactly the same. I suppose on some very basic level, they are. What alters them – between franchises and between entries in those franchises – are the basics that the franchise is well known for. You don’t need an entirely new engine, you don’t even need a new feature or character set. You just need to give the fans what they want.

And Koei manages that in spades. Omega Force delivers the same stress-ball gameplay on lower difficulty levels, while continually building a new level of difficulty to crack for the core with each and every release. Working out the nuances of the gameplay is part of the fun.

Everything changes within an individual framework. That, more or less, is what the very definition of a sequel is. That’s true for three sequels or 33.

The Opposite of AAA

Interestingly enough, not only do Koei give their fans exactly what they want, but they’re also almost the very definition of a mid-tier game. At a time when most games released are either incredibly low budget or have been incredibly expensive to make, it’s refreshing to find a game that cost just enough.

As more and more of the core gamers realize that AAA budgets aren’t sustainable, they are asking for publishers to cut back on their spending and, instead, create experiences that are cheaper and more focussed. In many cases, they don’t realize the knock-on effect this will have on their favourite games.

Koei just needs to keep on being Koei.

Koei, in Dynasty Warriors and in its other franchises, consistently deliver games that perform well, that sell regardless of mammoth advertising budgets and which the fans love. That might mean they can’t change the engine every time, it might mean they have to work their current tech a little bit harder and it might mean they need to offer the sort of things you’d expect from microtransactions, but that’s what it means to be a mid-tier publisher of mid-tier games. This is exactly the sort of game that sits comfortably without the need for millions of copies sold and millions of dollars spent.

And yet, somehow, Koei and the Warriors series still remains a joke.

Dynasty Warriors is no joke. Whatever the detractors might say, it’s easy to pull apart those with valid complaints and those who sit on the sidelines, grumbling about everything. It’s a franchise that more people should at least accept, and that less people should moan about without any real knowledge of what they’re talking about.

In many ways, Dynasty Warriors is everything that many core gamers are looking for in a franchise. Do they know the effect they have when they complain about these games being “always the same?” Do they know the kind of attitude they breed in publishers when they demand better graphics, less iterations, more gameplay changes?

Koei just needs to keep on being Koei. If they can manage that, they’ll always have a team of dedicated fans behind them.