Insomniac Games has developed some interesting titles in the past, so it was no shock that perhaps the wackiest game of the year was also developed by them. Despite a few minor annoyances, Sunset Overdrive might be one of the best original titles released in 2014, and potentially ever. The game mixes genres that you love – it’s been a while since a Tony Hawk Game; get your fix here! – and has some of the best writing I’ve seen in a video game to date. If you need something to grab to play this holiday season, Sunset Overdrive should be near the top of your list.

So much to Control equals so much Fun!

The controls in Sunset Overdrive will be overwhelming when you begin. This is not a bad thing, however, because as you get use to them you realize why they need to be so complex. You will grind on any edge, bounce off almost any car – early on I was annoyed I couldn’t bounce off the top of transport truck trailers – and flip and zip along hydro wires as you use a variety of guns to defeat the oncoming OD.

It's been a while since a Tony Hawk Game, get your fix here!

I’ve seen gripes about how bad the characters are at running. Generally, they are too slow. I’m almost positive Insomniac did this on purpose, because after all, you aren’t actually suppose to run. It’s all about grinding, climbing, wall running, and bouncing your way in a variety of different combinations.

There is no shortage of guns. If by the end, the exploding teddy bear gun isn’t one of your favorite weapons, you’ve done something wrong. Having a favorite weapon, however, might not be the best thing. The cool thing about Sunset Overdrive is that the weapons you use gain experience, rather than your character. So the more you use a gun, the higher that gun’s level will be. And some situations require a variety of weapons, which means upgrading at least one type of each weapon is a good idea.

All the OD isn’t the only Issue in Sunset Overdrive

Sunset Overdrive is a chaotic experience, but its doable. Playing the game never makes you feel overwhelmed, even though most of the trailers you watch will. What I like in ‘chaotic’ games is the opportunity to settle things down when looking through menus. Unfortunately, that really isn’t possible. Perhaps it is a sign of age, but I have to say I prefer the simple menus over those that are trying to be different. 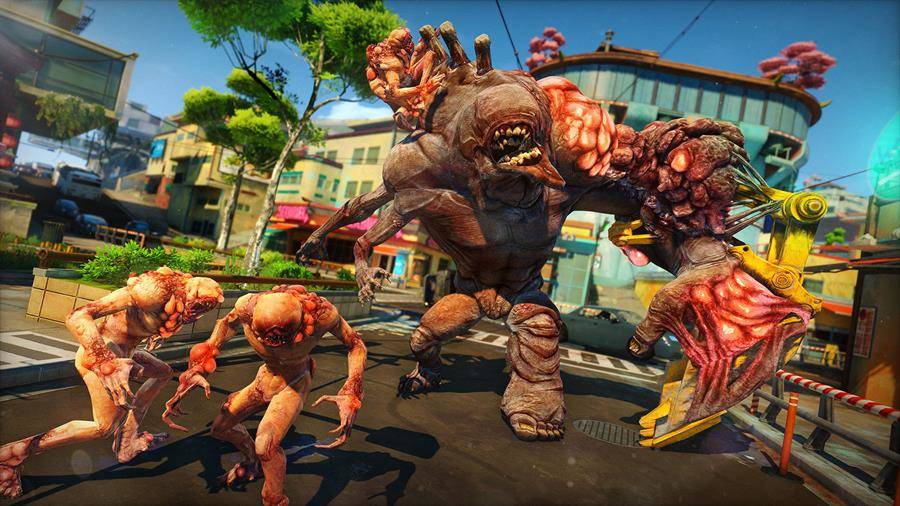 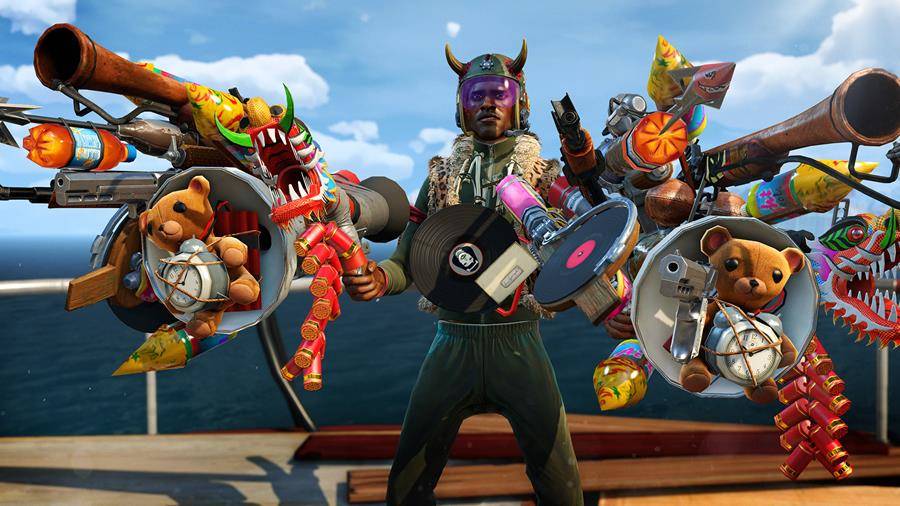 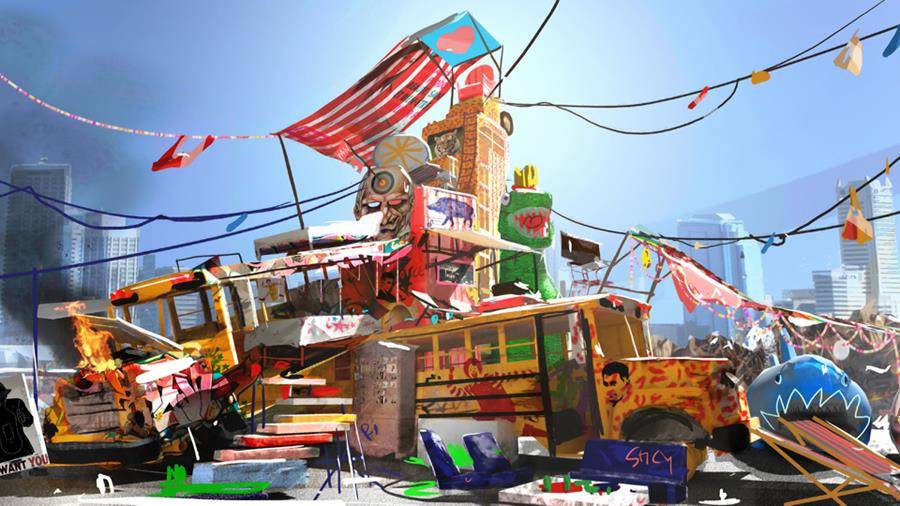 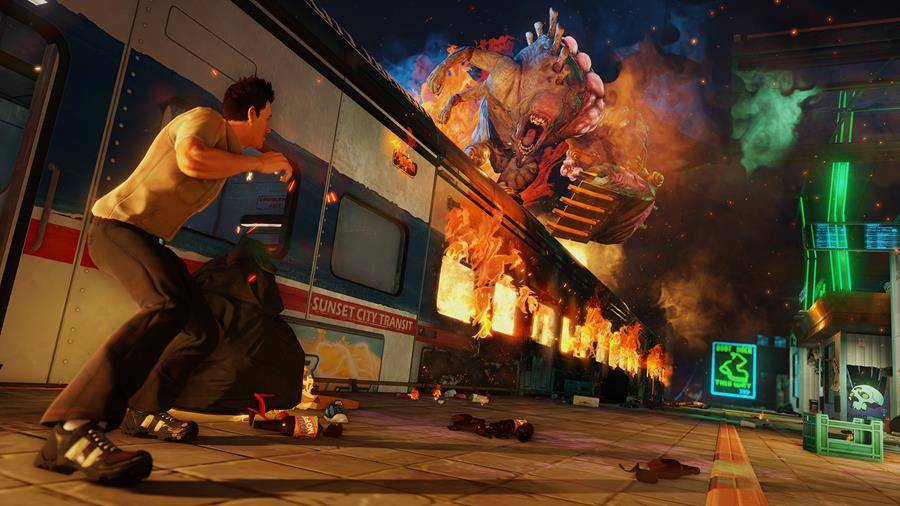 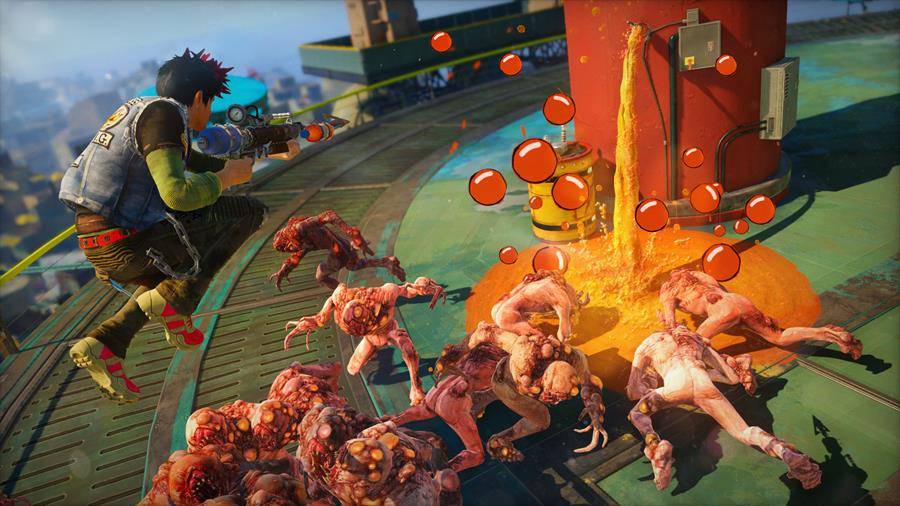 This leads to another, potentially unavoidable issue. While Sunset Overdrive attempt to be different in every aspect, the way missions plays out is identical to that of almost any other open world game. You get a mission, travel to a destination, complete a task, and return for your reward. It’s simple, it is common, and it needs to be refreshed, not only in this title, but in many others.

Minor Problems are Dumb; Bring on the Good!

Let me be clear: the above issues are so incredibly minor it’s almost an embarrassment that I wrote them down. At the end of the day, most of the issues I have are probably preference problems rather than anything else. When you look at Sunset Overdrive as a whole, and how much is going on in the game at one time, its almost shocking that the game doesn’t’ suffer from any frame rate issues. The game is always crisp and always clean. I never once said, “Well that was weird.” Well, at least not about potential bugs.

Sunset Overdrive is a chaotic experience, but its doable. Playing the game never makes you feel overwhelmed, even though most of the trailers you watch will

I’ve lied, because I said “Well that was weird” a thousand times. Sunset Overdrive is a new experience time after time. The brewery in the game acts as a central hub for much of the game, yet I never felt bored with the environment. Every time I entered or exited the brewery grounds, I attempted doing it in different ways. The same can be said about the entire world. It’s wacky, crazy, and down right insane. But it is always fun and always feels different.

Playing a game that is crazy works best when there is an a great story to go along with it. I haven’t really decided if I think the story is outstanding, but the writing is the best I’ve ever seen in a video game. Every line is clever, whether it’s a joke about how video games are written – once my character asked if he should follow a guy since he didn’t have a token above his head marking him as important – or a joke about society – my favorite example of this is when you clean up the water bottling plant to get a rich kid a case of “pure” water with about 30 different ingredients in it.

There is so much in this game to write about, and it just cannot be done in a review. If you want something different, grab a copy of Sunset Overdrive. If you’ve seen the trailers and feel a bit put off by the game play, find some way to give it a try; there is a good chance your mind will be changed. Personally, I had no desire to play or purchase this game, but after a few hours of playing when Microsoft offered up free access last weekend, I knew it was something I wanted to pick up at some point.