Kyrat isn’t a real place, but the beauty that Ubisoft brought to this pretend-although-based-on-real environment makes me want to head to the Himalayan Mountains sometime in my life. I’ll pass on the conflict however. Ubisoft has released another mega hit with Far Cry 4, giving Xbox and Playstation owners the best open world I’ve ever had the privilege of exploring. While the story is nothing to write home about, everything surrounding the story makes popping this disc in completely worth it.

Slogging through the Bad

While I feel many reviews have gone a bit overboard when discussing how terrible the story is in Far Cry 4, I do feel it’s definitely not the strong point of the game. It’s not terrible, nor is it particularly good. It’s just…there. And this is disappointing since I feel with a better story, Far Cry 4 would have received many of those elusive 10/10 scores.

I feel with a better story, Far Cry 4 would have received many of those elusive 10/10 scores

It probably begins with a forgettable, uninteresting main protagonist, twenty-two year old American Ajay Ghale. The story begins with Ghale visiting Kyrat to spread his mothers ashes in her homeland, eventually getting pulled into the civil unrest against the ruler of Kyrat, Pagan Min.

The story progresses intelligently; nothing feels disjointed. It is just not that interesting, especially since the villain of this game, Pagan Min, is non-existent for most of the game. The disappointment is increased when you realize early on that Pagan Min is by far one of the most interesting and vile villains that Ubisoft has ever created for a Far Cry game. Aside from a few radio calls, he completely disappears for hours after the opening cut scenes.

Take note. If you have already heard about the opportunity to beat the game in fifteen to twenty minutes, DO NOT DO IT! Leave that for after you have played through the game once, as most of the interesting questions you will have after watching the opening cinematic will be instantly answered, and therefore will instantly be ruined.

If you see the story as the reason for the great environment and side quests, than the poor story is passable. What happens in Kyrat that isn’t directly linked to the main story is excellent. Side missions are varied enough to make each quest enjoyable, regardless if its just doing something you’ve done a number of times already. Why? It’s because each situation is guaranteed to play out in a different way. Go in guns blazing, take a tactical approach with your always silent bow and arrows, or perhaps lure wild animals into the fray to do all the dirty work for you. Each situation calls for a certain approach, but the game never forces you to do something you don’t want to do.

Early on, you are tasked with liberating an outpost. With a little bit of thought, I realized me against 7-8 armed men of the Kyrat Royal Army wasn’t going to go over well, especially since I had no health upgrades and just the basics when it came to weapons. I didn’t take me long to realize – with a bit of prompting from the game – that I should instead shoot the elephant in the rear end with an arrow, making him bolt from his cage and take care of the entire outpost for me. 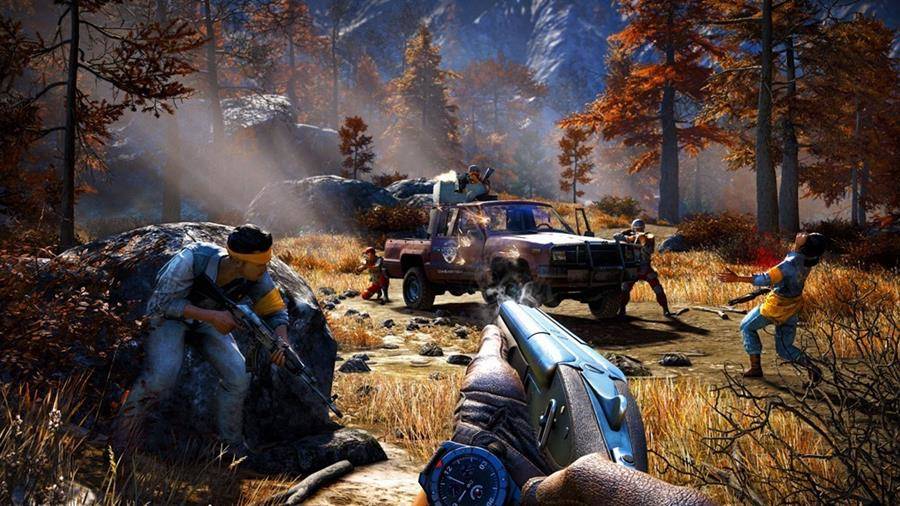 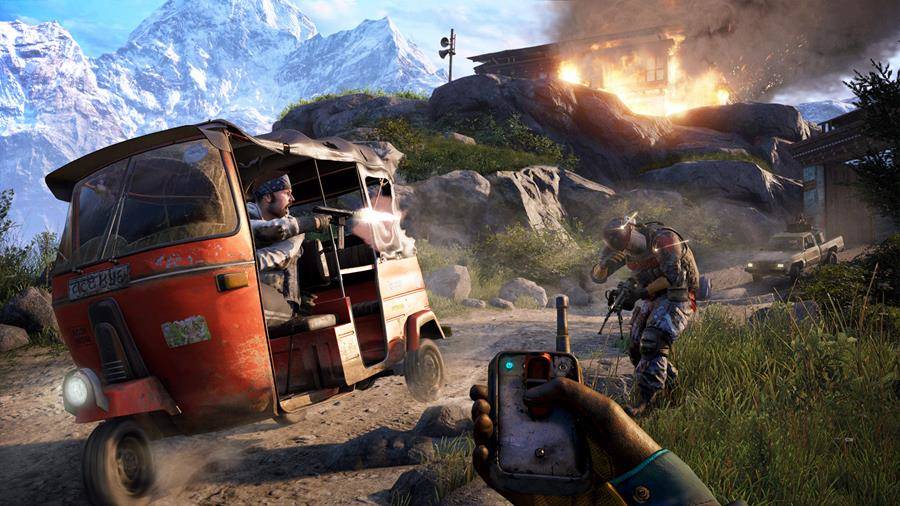 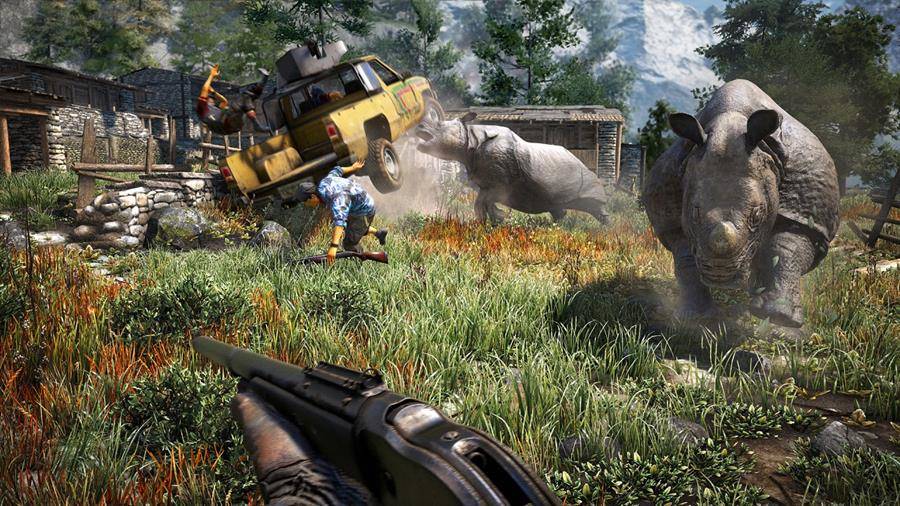 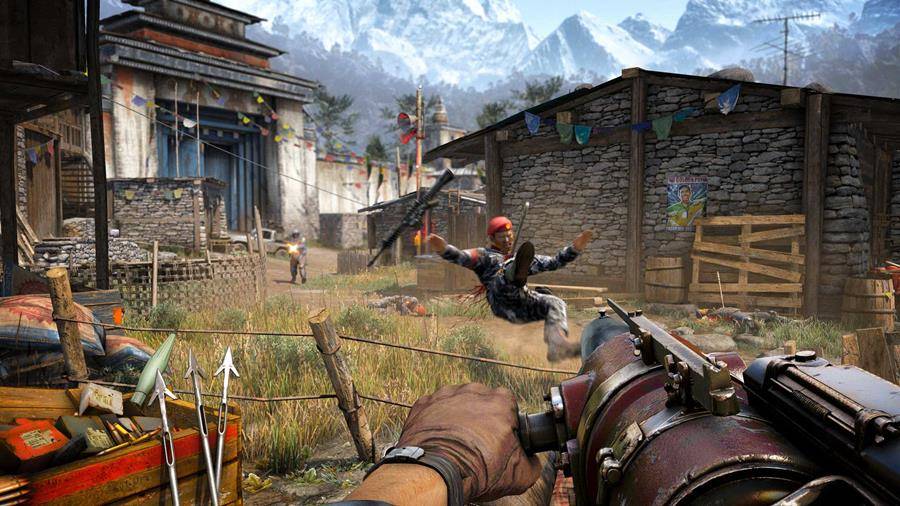 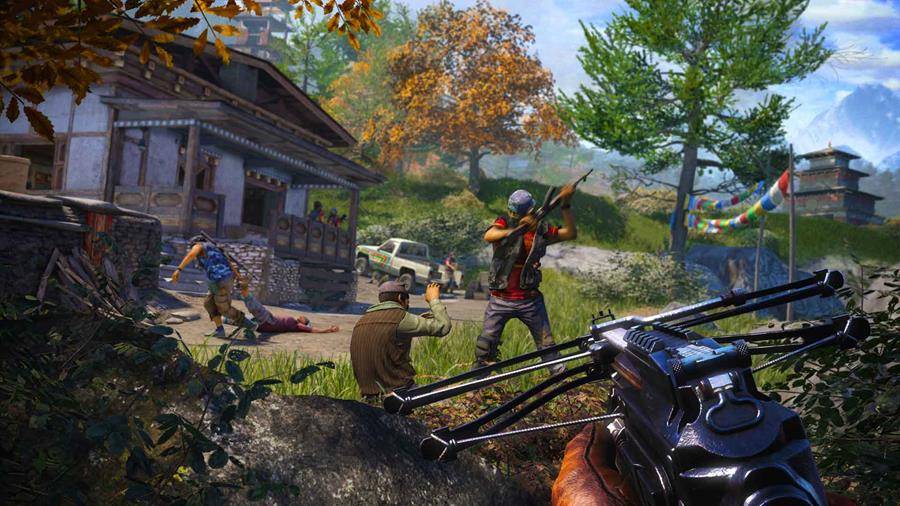 The environments are stunning to look at, and even more stunning to be apart of. I found myself wondering around for hours without actually doing anything. I saw a mountain, I wanted to climb it. End of story. Interacting with the environment is incredibly rewarding, especially when you are charging down a road on the back of an elephant, flipping cars and sending Pagan Min’s men flying through the air. I’m probably not the first to say it, but the elephant is the best vehicle in the game, and one you won’t typically find in other games.

I’ve seen criticisms of Far Cry 4’s overall feel, that it is too closely linked with what went on in the South Pacific in Far Cry 3. I’m of a different opinion in this regard. I absolutely love that Far Cry 4 is, more or less, just an extension of Far Cry 3. Far Cry 3 was amazing, so why wouldn’t I want more of the same. I wanted it, and Ubisoft delivered. They have even enhanced cooperative play, something I did very little of in Far Cry 3, but plan to do tons of in Far Cry 4. Having a friend jump into your game to help take over a particularly difficult outpost is not only beneficial, but also enjoyable.

Far Cry 4 is not the perfect game I hoped it would be, but it hits all those little things I hoped it would. Some innovations, such as the auto-drive feature, are great when they work, and ultimately frustrating when they don’t. Regardless of these issues, the world is intelligently built from the ground up, and although it borrows a lot from it predecessor, it always innovates when the situations allow. That’s why I have no issue with so much of Far Cry 3 making its way into Far Cry 4. If story is paramount for your enjoyment, perhaps passing on Far Cry 4 would be in your best interest. But if you can slog through the story, there is so much more to be discovered in the world of Kyrat, and in that regard, Ubisoft guarantees enjoyment by crafting an excellent world for you to explore.