Final Fantasy XIV was surprisingly announced in 2009, was released in 2010 to terrible reviews and was closed in 2012. There aren’t many AAA titles that get to be classed as unmitigated disasters, but the latest Final Fantasy MMO fit the bill. Not content with writing it off, Square Enix began repairing things that fans had disliked, and in 2013 released Final Fantasy XIV A Realm Reborn onto PlayStation 3 and PC. 2014 saw the re-release hit PlayStation 4, but does this particular rebirth find its place on Sony’s latest?

The PlayStation 3 release of A Realm Reborn was flawed. While the PC version shone with grand cityscapes and lush forests, the PS3 edition lagged behind by quite a lot, literally at times. The graphics left a lot to be desired, and even the simplest of things could end up dropping the framerate noticeably. The PS4 version has no such issues.

It's not going to directly compete with the likes of Infamous, but A Realm Reborn is impressive to look at nonetheless

In fact, it’s quite impressive what Square Enix have managed to do. It looks almost as good as the PC version (with a few more advanced options turned off). It’s a little jaggier in places, but still undeniably gorgeous. The framerate is by and large smoother than that on the PS4’s older brother, and the adventure benefits from it massively. It’s still not a constant 60FPS, which will only be available on decent PCs, but it’s good enough that console players will have nothing to complain about.

Also worth noting is the impressive draw distances which, in smaller areas, mean you’ll never notice things loading in the distance. It’s not normally the sort of thing you get to praise when critiquing a game (it’s usually either passable or bad enough to have to mention), but I can’t say I was ever put off by a reduced detail on the horizon.

It’s not going to directly compete with the likes of Infamous, but A Realm Reborn is impressive to look at nonetheless.

Take Me to the River (and Kill Eight Enemies)

Visually A Realm Reborn is easy on the eyes, but the gameplay itself is a little less enjoyable. Final Fantasy, traditionally, has been a plot-based franchise. There are always additions, new fighting styles or tactical battles to take part in, but you mostly travel from place to place, watching cutscenes and getting to know characters.

Final Fantasy XIV is much the same, only without the linearity of its offline counterparts. You’ll come into contact with hundreds of characters, thousands perhaps, but you’ll never get to know them as well as the side characters from previous titles. They’ll give you a quest, maybe something they say will make you laugh, and then you might never come across them again. They might not even be selectable. 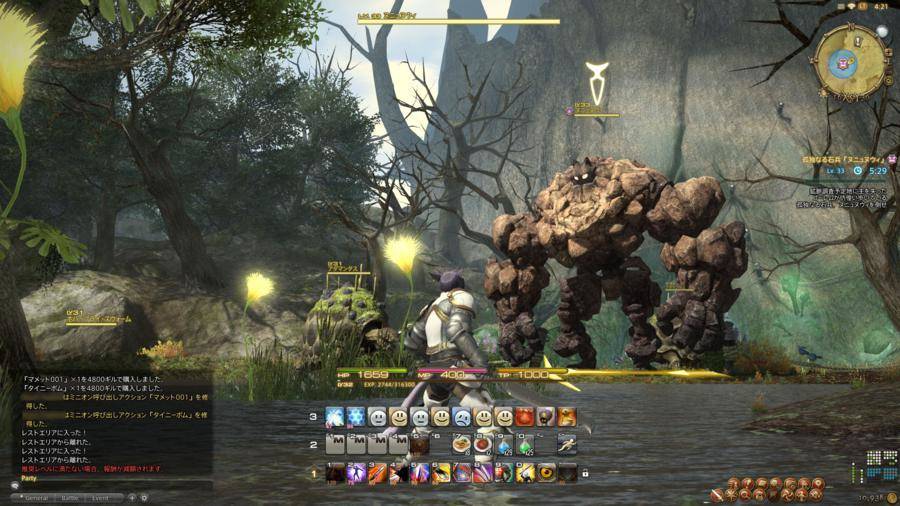 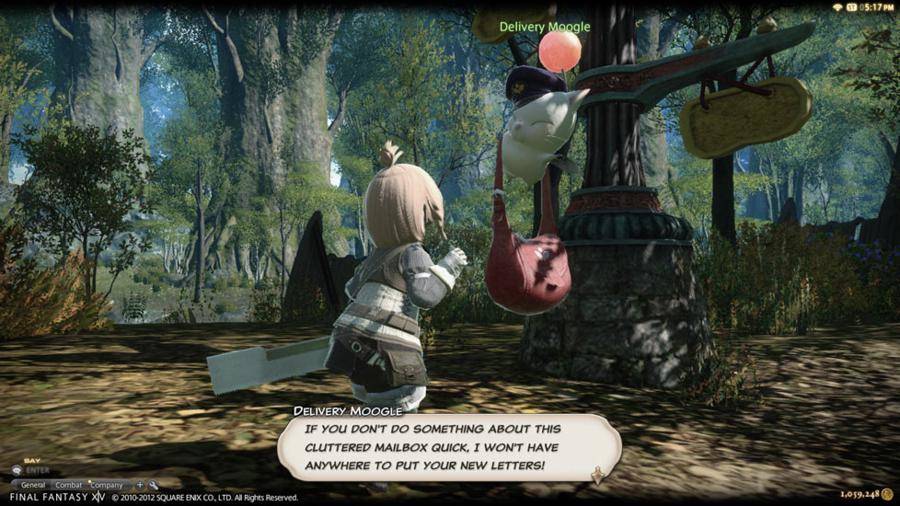 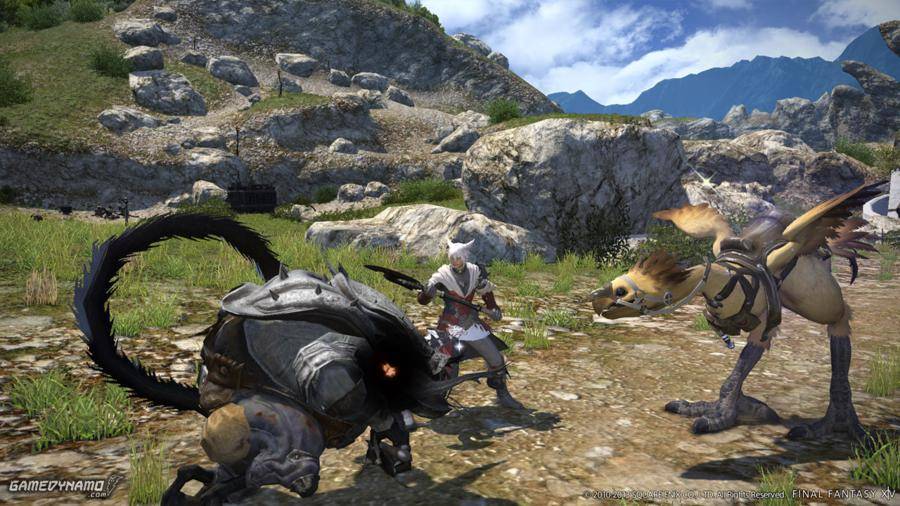 The important thing to remember is that this isn’t necessarily a bad thing. The focus is now on exploration, on learning the world of Eorzea. You don’t play as a big personality or take part in a love story, but you are given the impression that you influence the world around you, and it works. The story is quite good, it’s just accessed in a different way.

Quests are where things begin to fall down somewhat. Like many modern MMOs, A Realm Reborn offers a couple of different types of quest to keep you busy. There are story quests which introduce new elements to the plot and are often accompanied by voiced cutscenes. On top of that you have side missions and FATE. Side missions are pretty much what you’d expect: kill eight of a certain creature, interact with somebody, find a key item… It can get fairly repetitive, but no more so than the random battles of every Final Fantasy up to XI.

FATEs will be familiar to anybody that’s played Guild Wars 2. As you’re exploring, you’ll be alerted to events in the local vicinity. Something is attacking and it’s up to any well-bodied adventurer to fight it/them off. These are a quick way of gaining experience and nice reminder that this is a multiplayer game first and foremost, and it’s a nice break from regular quests as well.

There’s never a feeling that you need to grind or spend an unnecessary amount of time doing things you don’t want to. So long as you’re clever in how you organize your missions and equipment, the pacing is actually better than most other MMOs. Even Guild Wars 2 sometimes left you needing to venture into higher levelled areas if you wanted to continue, and I’ve found no such problem with Final Fantasy XIV.

Combat isn’t quite automated (not if you’re doing anything outside of hitting), but it isn’t as played-based as it could be either. I’ve also noticed being damaged by creatures over a distance as well, a big negative in today’s MMO world. In short, you’ll stand and watch while picking new moves for your avatar to perform while also being attacked. It’s fairly standard and perhaps a little underwhelming, but not bad.

Parties and Free Companies exist to let players band together, and there are definitely advantages to being part of another player’s group. With that said, A Realm Reborn can mostly be experienced as a single player title as well, so there’s no pressure on playing with others if you have no interest in doing so. You’ll still be able to play through the main plotline, only coming across others during FATEs and while out and about.

Like many Final Fantasy games, A Realm Reborn offers a fairly unique job system. Players are able to change class on the fly by changing weaponry. This isn’t the norm for MMOs, and it’s a nice change of pace. Knowing that you’re not going to have to lose your entire game’s progress just because you’re tired of being a very specific kind of mage allows not only for individual player choice, but also for a better style of play when it comes to dungeons and the like as well.

The base game is enjoyable enough, if a little hindered by the genre as a whole. Square Enix have also gone out of their way to actively support the PlayStation 4 and some of its features. The most obvious way is in the use of the touch pad, which doubles as a “mouse.” At any time, you can use it to bring up a small pointer which gives you slightly more accuracy in what you’re selecting.

This is good when things aren’t too crowded, but doing things like healing an ally still isn’t as good as it should be. Even when you’re selecting another player with the touch pad, it has a nasty habit of clicking through to an enemy behind them. This is partly a problem of screen real estate, which can be a little hectic on PlayStation 4. You can move the HUD around to a certain extent, but you’ll still end up occasionally finding things blocking important sections of the screen.

On top of that, there’s still a few odd glitches in there that make playing a little unusual at times. Sometimes, especially in cutscenes, characters will talk over one another for no good reason, and, as mentioned above, enemies can whack you from a mile away.

Still, the PlayStation 4 port is far beyond what could be expected. They’ve taken advantage of the touch pad and of the speaker inside the controller, but have also built upon what was possible on the PS3. They’ve improved beyond graphics, and A Realm Reborn PS4 is much, much better as a result.

MMOs don’t often stay pay-to-play for very long. The day of the subscription fee is quickly coming to an end and only the likes of Elder Scrolls Online and A Realm Reborn try to buck that trend. The fact is, with enough focus and depending on what you’re interested in, you could easily see everything Eorzea has to offer in the free thirty days included with the purchase of the game. You’ll never make it to the platinum – that’ll take you several hundred hours to attain – but you’ll have finished the story and seen some of the end game content.

As for the subscription itself, it’s not too bad a price, fairly standard and with enough content to make it worth it. It’s not ideal – especially when the vast majority of MMO games offer a similar amount of playtime for absolutely nothing – but it is what it is. If you’re interested in paying, you won’t be disappointed. If you’re not, play as quickly as you can and try not to get too distracted by the world around

Once upon a time, the idea of an online Final Fantasy seemed insane. That Square Enix would make TWO MMOs was laughed at as well. But the publish definitely has the last laugh. A Realm Reborn is a more than capable MMO and an enjoyable title even for those with little interest in the genre. References to older games and a fully explorable world make it a strong entry in the franchise and only smaller problems and genre constraints really manage to hold it back.