Sword of the Stars: The Pit – Mind Games DLC Review

Mind Games is a DLC that adds a slew of new content to Sword of the Stars: The Pit. It includes new levels, new weapons, new items, and new enemies. But, the most exciting addition is the psionic powers, along with 2 new classes: the ranger and the psion.

I would place the ranger somewhere between the scout class and the marine class. She doesn’t excel in might or finesse but rather has a balance of the two. I found that I lasted the longest with the ranger, making it down to level 9 (yes, I’m really bad at this game!). The psion, obviously, utilizes the new psionic powers giving him many new ways to tackle the levels. The powers are fun to use, although some require the use of the arrow keys to aim whereas I prefer to use the mouse and just click the enemy. It is also important to note that while the psion has the most skill points for the psionic powers, any other class can use these powers as long as they can afford them.

The psionic powers are separated into six tiers: empathy, telekinesis, war mind, redaction, manifestation and mecha empathy. Each tier then has four powers that require a certain number of skill points.

Empathy gives the ability to manipulate other living minds by either instilling fear or gaining them as an ally. Telekinesis grants the power to control objects at a distance and can also push enemies or projectiles away. War mind gives the ability control enemies by paralyzing them or draining their life energy. Redaction is the healing line with a power to heal, to regenerate, and even to reduce hunger. 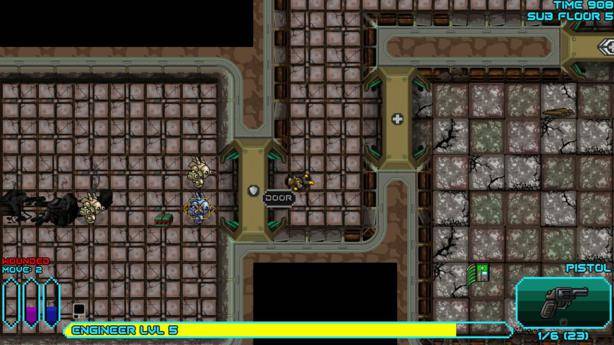 Manifestation allows you to create items from nothing. Mecha empathy is very similar to empathy, except instead of manipulating living beings, you have the ability to manipulate robots and machines.

This impressive list of new powers adds a lot to the already fun gameplay and provides interesting new tactics to try.

If you enjoyed Sword of the Stars: The Pit then I highly recommend checking out Mind Games

Mind Games also adds new monsters, items, weapons, traps, and recipes to the game. When I started up the DLC for the first time, the first monster I ran into was a wolf that could become invisible! There are also new floor and room types to add more variety to the experience. The most interesting new room is the meta room. In here you can store items and deposit experience points for future playthroughs. When you die, you can then choose to start at the level you stored your items and experience at. This helps curb the difficulty of dying permanently. And finally, the DLC also adds two new play modes: “Infinite” mode and “Seriously?” mode. Infinite mode is self explanatory: survive as long as you can. Seriously? mode is a new difficulty for those who enjoy getting punched in the face with a porcupine. I can barely get by on normal but I’m sure there are people who would enjoy the challenge.

Mind Games adds a ton of new content to an already great game. The added classes and psionic powers alone gives the player a new way to play and strategize. It gives a lot of variety and even more replay value for the low price of five dollars. If you enjoyed Sword of the Stars: The Pit then I highly recommend checking out Mind Games.