If ever a development team deserved an “A” for effort, it would be On The Level Game Studios, the team behind The Curse of Nordic Cove.  This indie title is a Survival Horror/ Golf/ Viking/ Stealth/ Puzzler/ Shooter.  With chickens!

The Curse of Nordic Cove is an unabashed indie game.  The graphics are primitive, the controls are frustrating, it is filled with “What the hell am I supposed to do NOW?” moments, and much of the time the damned game engine just plain doesn’t work.  The list of things wrong with this game is nigh-endless, but it still deserves a closer look because the development team was clearly dedicated to creating something new and different.

It’s about a group of misfits who become trapped at a country club that happens to be built on top of a Viking burial ground, and the spirits of Nordic warriors have arisen to plague those who dare venture onto the green.  Players will control the punk rocker Paulie Chops and his friends as they try to end the curse of the demonic Helfdane!

It’s divided into eight chapters, each of which comes with its own set of rules and often a new playable character.  The first levels are a combination of first-person shooter, and golf.  Because it’s set in a country club, Paulie has the chance to get in a few holes while he hunts down the magic runestones needed to stop the bad guys (Sure, why not). 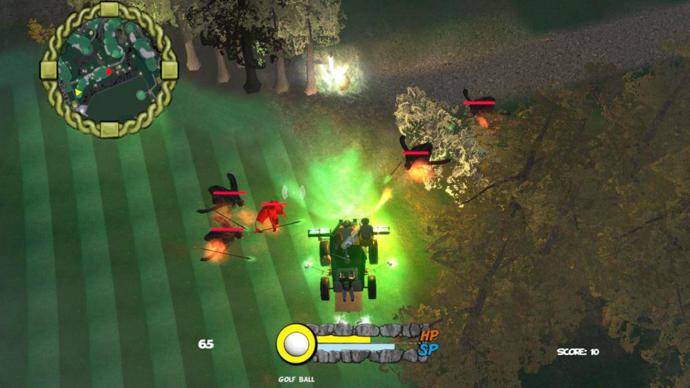 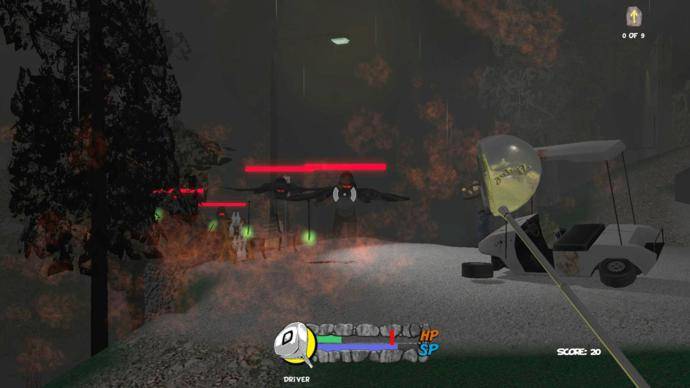 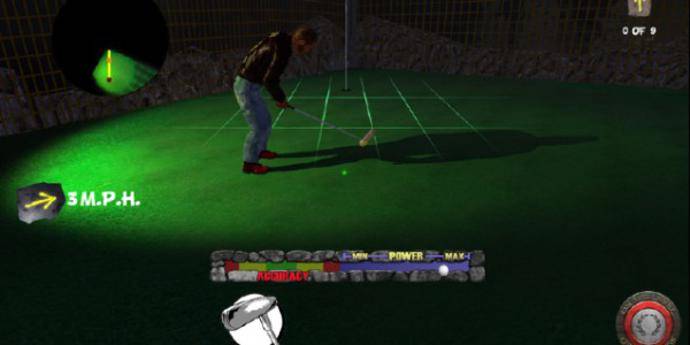 Of course he has to alternate between playing golf and fighting the Vikings in a bizarre combination of a golf minigame and first-person combat.  Paulie can swat at the ghosts with his golf clubs, but he also has a golfball gun.  The clubs will wear out after a few whacks, and the gun has limited ammunition, so players will need to scrounge around the course for spare clubs and extra ammo.

A BLEND OF GENRES

Afterwards players take control of Paulie’s stuffy archaeologist pal for some basic puzzle-solving and block pushing.  This is followed by vehicular combat in a killer golf cart, some on-rails shooting, a Doom inspired chainsaw fight, and ultimately sneaking around a Viking tomb with some simple stealth mechanics.

Unfortunately almost every style of play has something horribly wrong with it.  The golf sequence has players trying to hit a ball around the level, but enemy ghosts will come flying out of nowhere and often attack in groups. This makes the combat a frustrating distraction for players who are just one swing away from beating a particular hole. This part of the game mimics survival horror games, meaning that there is limited health and ammunition.  Players can reach a point where they run out of supplies and know in advance that they won’t be able to beat the level boss at the end of each hole.  There are also upgrades for the golfball gun, but players can easily miss this entirely if they don’t follow along the designers’ intended path.

Later on, players will take control of a killer golf cart and race back through the same areas blasting away with the golfball gun.  While this sounds pretty cool, the cart is prone to flying into the air, getting stuck in corners, and just plain exploding for no discernible reason.  Some enemies can even attack the player from off-screen, leaving Paulie and his team nearly defenseless.  On the bright side there is a kick-ass punk rock soundtrack that blasts in the background (often while the player slowly makes three point turns).

In an homage to classic shooters there’s a sequence where players can use a chainsaw to fight off werewolves inside a crypt.  At least if the monsters spawn as intended.  Sometimes they are there, sometimes the player can just run through the entire level without encountering any enemies at all.

The Curse of Nordic Cove often comes across as a portfolio piece, as if the designers are saying “Look what we can do”.  What they can do is actually pretty cool and it’s easy to imagine the sort of game that they could create with more resources.  Although the game is bogged down with bugs, it does show a great deal of promise for the team that created it.  It’s probably not the best use of twenty dollars (in fact it’s definitely not) but buying The Curse of Nordic Cove is a great way to support an innovative indie team, and spend a night of frustrating fun fighting vikings with a golf club.