Akaneiro: Demon Hunters is a game by Spicy Horse, originally released as a web browser title and now available for early purchase as a downloadable on Steam. It’s still in development, with new features on the way over the next few months, so this probably isn’t the last time we’ll take a sojourn into historic Japan.

An action-RPG of sorts, Akaneiro’s beautiful art style covers limited, repetitive gameplay that may be fun in small doses on a tablet or in a browser, but which ultimately falls long short of greatness.

Without a doubt, the biggest feature of Akaneiro – the feature that has influenced every other – is that it’s free-to-play. You can play it in your browser right now or, when it properly launches on Steam, you’ll be able to download it at no extra cost. Of course, that means that you’ll want to pay in other ways if you hope to get a smooth, constant experience.

This isn’t a problem in itself. Microtransactions, paying so that you can play without interruptions, are part of the free-to-play model and those that enjoy it have come to expect that. It helps that Akaneiro is hardly a game you’d choose to play for hours on end, as it’s rather repetitive, so some of the issues are unlikely to affect everybody.

When you finish a level – always on its easiest mode first and then unlocking further difficulty levels as you continue to play it – it’ll enter a cooldown phase. While it’s not great that it’s forced, it’s unlikely that you’d want to play the same level over and over again in quick succession anyway – there’s no random level generation and even the locations of enemies are identical each time. You can, of course, pay to speed up the waiting process if you’re feeling especially masochistic. 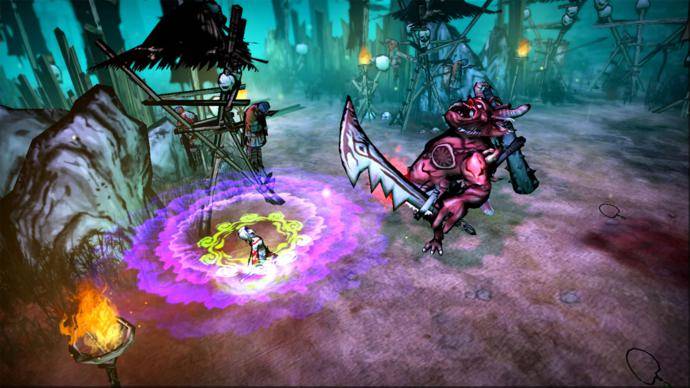 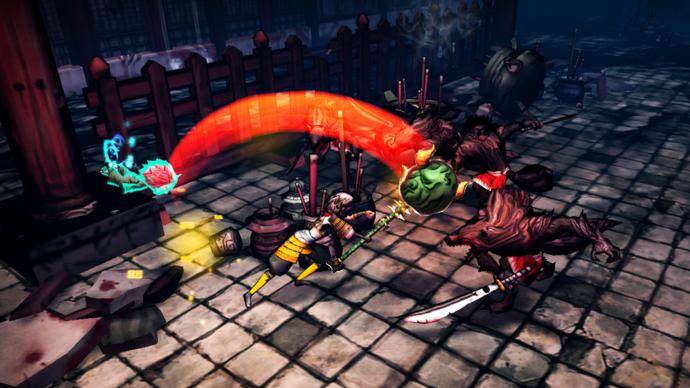 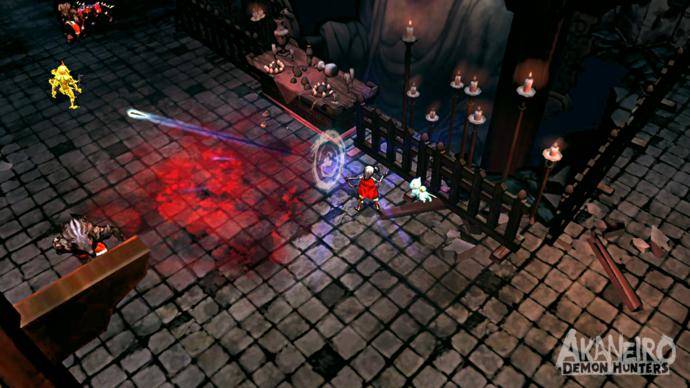 You will have to play it again though, eventually. Grinding is a huge part of Akaneiro, especially if you want to see absolutely everything that it has to offer. That isn’t a huge amount though. For although each level is designed differently, it all amounts to the same thing. Run through a path, click enemies to kill them, get to the end, kill a boss, end level. Sometimes there’s a little variety, like you need to kill so many of a certain enemy before you can fight the boss, but it boils down to a single formula.

How Easily You Die, Granny…

The gameplay could be fun in short bursts, especially if the developer adds ways to shake up the monotony of the combat somehow (by allowing for attack queuing or more varied special moves perhaps), but things aren’t aided any by a confusing, poorly presented story. Apparently based vaguely on Little Red Riding hood, plot progression is presented in small text boxes during a game, text boxes the disappear fairly quickly and will be missed entirely if you’re mid-combat.

It’s easy to miss a key part of the story, and it’s only through repeated play of each level that you’re likely to get the full thing. It’s not terribly good anyway.

That could be said of a lot of things in Akaneiro. Demon hunting might be the name of the game, but that basically boils down to clicking an approaching enemy and watching as your character hits them with whatever weapon you have equipped. You’ll repeat that multiple times, even as you’re attacked by huge groups. Even when surrounded, you’ll have little trouble dealing with anything you might come across.

All you need to do is keep moving until you’ve wiped out everyone in a group, then tank the remaining enemy knowing full well he won’t be enough alone to finish you off.

All of this is more frustrating because of just how beautiful Akaneiro is. It’s a great looking game, and needs to be seen running at 1080p and 60FPS before it’s fully judged. It takes everything that was great about, for instance, Okami, and builds on it to the point where, with some decent level design, it could have been one of those truly fantastic stand-out stylized games that gather a fan following based on graphics alone.

The music, similarly, is haunting, dark and unerringly suitable, and it’s a joy to listen throughout, although there’s not a huge amount of variety.

The aesthetics are there largely to distract from the full package, from how often you’ll fight the same enemies in the same way in a very same-y place. It doesn’t work. Levels tend to be around the three to ten minute mark, so playing a bit every day is unlikely to stress your patience too much. Even then, there are better alternatives out there.

As new features are added, I feel like Akaneiro will become well worth playing to action-RPG fans, and I, personally, won’t hesitate to take another look in six months time. For now though it’s a promising idea made underwhelming in fruition, a game for which its biggest attraction is its price tag. Don’t let the graphics fool you, there’s something wrong here, and it isn’t the demons.