Bioshock Infinite was fairly unique in that it was entirely self-contained with room for discussion, but with plenty of opportunity for DLC. The idea of multiple universes isn’t a new one, and it always opens itself up to certain issues, but it did mean that Booker and Elizabeth could end up appearing almost anywhere. So, of course, they ended up back in the underwater city of Rapture. It was an easy way of impressing fans, but it’s questionable whether that managed to pay off.

Booker’s gone, but his buddy-cum-daughter Elizabeth doesn’t quite feel things are properly resolved. In particular, she feels bad for how she used little sister Sally in Burial at Sea episode 1, guilty that she might have been no better than Comstock. With the help of everybody’s favourite not-incestuous-but-almost couple the Luteces, Liz makes her way back to the city beyond the sea and finds herself slap bang in the clutches of definitely Irish thug Atlus.

Almost every important character from Bioshock and Bioshock Infinite makes an appearance. This is that sort of add-on

Almost every important character from Bioshock and Bioshock Infinite makes an appearance. This is that sort of add-on. In closing Elizabeth’s story, Irrational also chose to finish the overall story of Rapture, of how the two cities link up. This goes further than you’d expect, and while I don’t want to spoil anything by going into detail, it’s worth noting that if you don’t want Elizabeth and Booker’s story to feel like an extension of Bioshock 1, you might want to look elsewhere.

The revelations in Burial at Sea Episode 2 manage to be both mind blowing and a little underwhelming. You’ll find out things that will change the way you look at the original Bioshock, but with answers to questions nobody asked. The developers successfully add depth to the connection between Rapture and Columbia, but don’t manage to fill out the spaces left by either game. The Song Bird’s origin, for instance, is further hinted at, but left a mystery. Why Rapture uses injections for ADAM instead of drinkables? That’s explained, but not the biggest gap in Infinite’s plot.

It’s great to see Andrew Ryan and buddies return, and it’s nice to see Atlus at his baddest. In the original Bioshock, we only heard about his misdeeds second hand. Here we get to see how far he’s willing to go to get what he wants, and he goes a very long way. Similarly, new depth is added to certain scenes in Columbia, although, again, it’s kind of half-hearted. An interesting twist will make you long for more, but it never delivers. 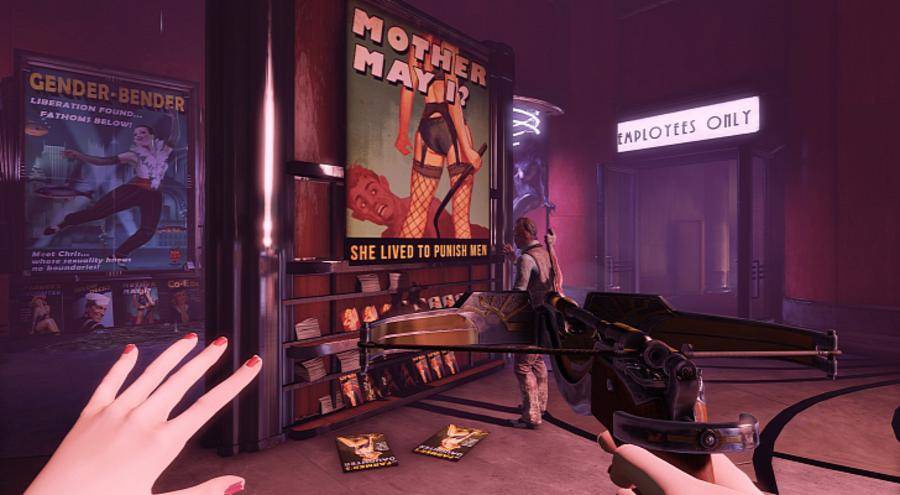 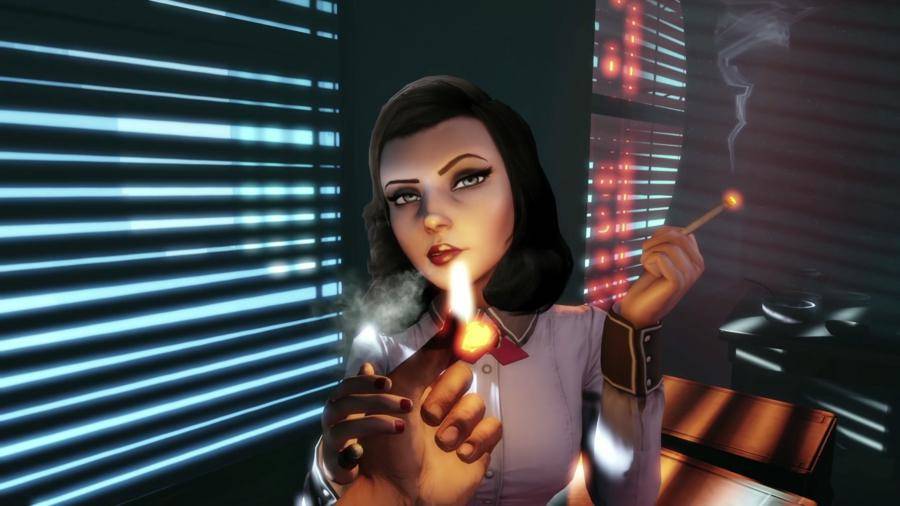 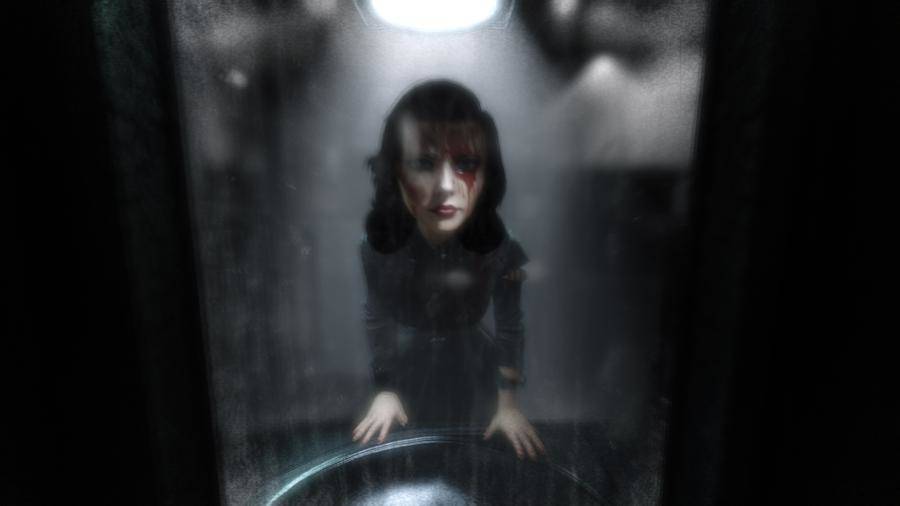 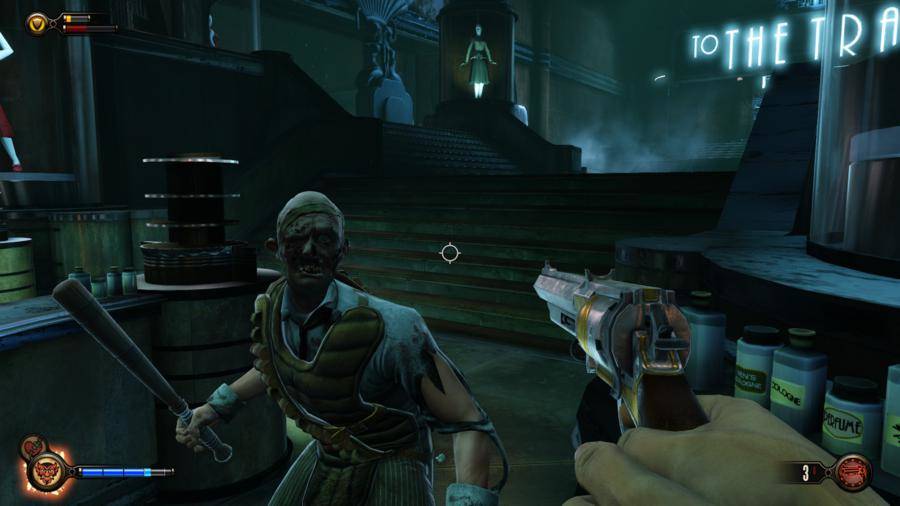 Some have said Burial at Sea Episode 2 is like fan fiction, and it’s easy to see why that parallel exists. It’s not necessarily because of lazy writing or incomplete thoughts, although both exist in parts. It’s more that Irrational have tried to make a story within pre-existing constraints. They took Booker and Elizabeth, characters we got to know better than 99% of fictional video game characters anyway, and placed them into Rapture, a city we’ve already explored twice before. It was nice to revisit, but they were building within an already constructed history, and that’s a dangerous thing to do.

For fans, it’s nice to get a bit of closure, but perhaps not enough. They’ve skirted the issues many of us wanted solving, perhaps entirely because they were so difficult to solve, and these moments stick out as a result. It’s a nice distraction, especially since it’s obviously been made with pleasing fans in mind, but not the all-consuming ending it might have been.

Elizabeth isn’t much like Booker. She’s slighter for a start, and without her supernatural powers inexperienced when it comes to fighting off enemies. On top of that, she’s alone, and surrounded by half-crazy splicers and other sub-sea dangers. It goes without saying that Elizabeth takes a slightly different approach…

Burial at Sea Episode 2 is, for all intents and purposes, a stealth game. It doesn’t need to be. With quick aim and plenty of movement, you’d probably be able to play it as a regular shooter from fairly early on, but it’s obviously not how it was designed. With sneak helping Plasmids and rooms full of enemies, your best bet is to move slowly, and knock out anybody who might get in your way.

Those that struggle with the likes of Metal Gear and Splinter Cell needn’t worry. It’s not especially difficult to get around, and quickly earned Plasmids, Peeping Tom specifically, mean you can turn invisible whenever you need to. But it does add a completely new string to the Bioshock bow. It’s always been a game that’s fun to explore, and slowing things down really plays to its strengths.

The actual story largely consists of you finding things for Atlus. This is less interesting, although why that is is hard to explain. Bioshock Infinite was extremely linear, to the point where you could rely entirely on the forward arrow if you wanted. Burial at Sea Episode 2 is no more or less linear than that, but the choice not to even try and hide that fact from you through varied quests means it seems much less fluid.

With the drop in speed as you sneak through vents, you’ll still find plenty of extracurricular activities to partake in. There are things to collect, not least the audio diaries so prevalent in the franchise. Extra weapons and pumped up Plasmids are on offer as well, if you know how to look. Extra mini-games for certain sections, most often lock picking, bring back a much missed part of the original Bioshock games.

On the whole, the gameplay works. There might not be much to do if you stick strictly to the quests, and it’s a little too easy to rampage, but if you play as you’re supposed to and take plenty of time to explore, it’s hard to imagine you’ll be disappointed. That’s until the community-busting ending, anyway, but that’s something different.

Burial at Sea Episode 2 is, for all intents and purposes, a stealth game. It doesn't need to be

The voice work is as great as ever as well. Bioshock Infinite, along with The Last of Us, proved that voice acting in games could pull you into a game as well as graphics and gameplay, and that tradition continues. Whether you’re just listening to a splicer singing from atop a ceiling-fixture or feeling Elizabeth’s pain during a big twist, you’ll be right there along with them.

Burial at Sea Episode 2 was a risky venture all around. New gameplay, new direction, new main character, on top of a few game-busting secrets that’ll completely change the way you see Bioshock Infinite and the original Bioshock. These were things that were always going to split the fanbase no matter how they were delivered. On top of that, there’s a few technical issues, and the things not solved now seem annoying and underutilized, specifically Song Bird.

Still, as a final Irrational-led Bioshock, Burial at Sea Episode 2 is an experience that’s easy to enjoy. Don’t ask too many questions, and you’ll enjoy the ride.