Could Super Smash Bros U Be Better than Melee? 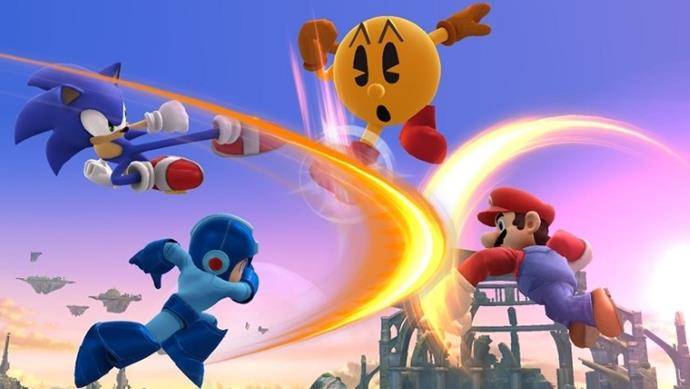 Everybody’s excited for the next entry in the Super Smash Bros franchise, and that’s in a huge part thanks to the character and location reveals so far. But there’s one question that’s yet to be answered: could it be even better that Melee? And while we’re trying to answer that, we’ll also take a look at a few more characters that might well appear in the roster.

Could Super Smash Bros U Be Better than Melee?

First off, look at the image above; no it’s not Photoshopped. This fight can actually happen in Smash Bros for Wii U and 3DS. PAC-Man, Mega Man, Mario and Sonic the Hedgehog have all showed up to battle in this new Smash, and it sure is something to see. My childhood fantasies couldn’t have been answered better. That’s right PAC-Man and Mega Man have both been announced as playable characters in the upcoming Smash for Wii U and 3DS and Sonic will be making his return. Mega Man has a plethora of attacks based on several robot masters throughout the Mega Man franchise, like Metal Man’s Metal Blade, Leaf Man’s Leaf Shield, and Top Man’s Topspin. PAC-Man uses his fists as well as some pixilated fruit and has a variety of other interesting move sets. But his Final Smash is the best. He turns into the PAC-Man we all know and love and devours the entire screen. Smash Bros. is where all of the console war jabs go to die, or where new ones could start, I suppose.

Could Smash Bros. for Wii U and Smash for 3DS finally dethrone the reigning king of Smash Melee? It would seem that Nintendo are aiming for just that, catering not only to the everyday Smash fan, but to the competitive ‘Bros.’ as well. By introducing a peripheral that will allow a Gamecube controller to be directly hardwired into the Wii U, the player can use arguably one of the best inputs of all time to manipulate their character of choice, the same way that they have been doing for almost 10 years now. Super Smash for Wii U and 3DS seems to be offering everything that Smash players could want. From an assortment of diverse characters including many fan favorites from the entire franchise to the most comfortable and recognized way to play via the GCN controller and all of it in beautiful 60fps 1080p HD graphics. The dethroning of Melee could certainly become a reality for Nintendo. But why stop there? Let’s find out who the fans think should be in Smash. We already have Mega Man, and PAC-Man, who else do you want in Smash for Wii U and 3DS?

Characters we would like to see in Smash Bros. for Wii U and 3DS

There are endless requests for characters from various video game franchises that fans all across the world would like to see on the roster of the next iteration of Smash. Because Mega Man, Sonic, PAC-Man and now Rayman have made the game, it’s not entirely crazy to think that any of these characters could be in the next Smash Bros.

Simon Belmont slays monsters. That’s just what he and his entire bloodline do. From Skeleton Warriors, to Dracula Simon has vanquished them all. His arsenal is extremely versatile and from throwing axes, holy water, and his signature whip, Simon could draw a whole new audience to Smash.

Is it Gaiden or Gayden? Either way, Ryu Hayabusa is probably the world’s most recognized ninja in all of gaming. From his signature katana to flame shields, and from gripping ledges to throwing ninja stars, this is one ninja you wouldn’t want to face on your best day.

Xenoblade Chronicles’ Shulk single handedly saved the human race from extinction from a mechanical menace. His Arts are unparalleled and the sword he wields, The Monado, is made of light. He can see the future before it happens and can change it when he sees fit. Shulk is actually creating the biggest noise right now out of all the potential characters from Smash fans. Let’s hope that with a new Xenoblade game on the horizon (although he’s not in it), we could see it happen.

This shovel wielding knight is well versed in combat and has a surplus of gear to aide him on his quest. From fire balls to the Air Dash ability Shovel Knight can simply pogo bounce off of his foes and send them into oblivion.

This is just a given. Why isn’t Bomberman in Smash yet?! I mean, he has spent his entire life blowing up his rivals and has done it in interesting and unique ways. From Cherry Bombs to Poison Explosives, Bomberman could clear a screen in minutes.

There are several other characters that fans would love to see added to the roster like Bayonetta, Fi (Skyward Sword), Turok the Dinosaur Hunter and even the dog from Duck Hunt. Well, we may never get to beat the living daylights out of that snickering little hellhound, but I will tell you who you will be getting the chance to fight.

Now You Can Join The Fight

Finally, one of the coolest editions to the Smash roster is you. You can use your own Mii when battling Mario, Samus, or Donkey Kong, and it was announced that Mii Fighters can be some of the most powerful opponents in the game. Pick from three different classes: Brawler, Swordfighter, or Gunner, and you can make literally anyone that you would want to fight as, or against. For instance, you could have your boss duke it out with Little Mac and Captain Falcon. Man, that’s a lot of hurt.

With more 3rd party mascots being introduced in the roster, a multitude of 1st party announcement characters, and you yourself to chose from, Super Smash Bros. for Wii U and 3DS seems to have no intention on slowing down anytime soon. In the past, we’ve seen Solid Snake from Konami’s Metal Gear Solid series and now Pac-Man and Mega Man join the roster. Who knows? Maybe Aiden Pearce from Watch Dogs, or even Zero from the Mega Man X universe are possible at this point.

Super Smash Bros. is a staple of the gaming community. The excitement will only continue to grow leading up to the release of the new installments, while old favorites will be continued to be played for years to come. Super Smash Bros. for 3DS will be available on October 3rd, and its Wii U counterpart will be available sometime during this Holiday season. Whether you’re a diehard fan or a newcomer to the series, now is the time to be excited for one of gaming’s best mash up fighters of all time.