Creative has made some impressive products over the years, and we have just begun reviewing a ton of them on GamesReviews.com. Video game audio continues to improve, and as gamers become more competitive – and in certain situations, go professional – having top grade audio is equally as important as high definition video.

Creative has an extraordinary lineup of speakers available to satisfy varying levels of consumer requests. Near the higher end is the Creative T4 Wireless 2.1 Speaker set up. While you won’t find that 5.1 or 7.1 surround that other – generally more expensive – setups will have, this little setup does more than enough to satisfy even the most intense gamers.

I live in relativity small, old house, and therefore, there are no ‘huge’ rooms in my home. I’ve only had a few sound systems up until this point, and none have lasted long because of the large, bulky nature of their existence. Enter the Creative T4 Wireless system. Don’t be fooled by the small speakers, because this system can unload extraordinary sound. While most of the videos online portray people using these on their PC’s, I choose instead to hook them up in my (small) living room to see if perhaps these could last longer than a few weeks. A few weeks hasn’t gone by yet, but even my wife is happy with the limited room this entire system takes up.

Included in the box is two small stand speakers, a medium sized sub woofer, and of course, a variety of connectivity cables and power adapters. The Sub woofer sits nicely beside my entertainment system, while the speakers flank my television on the left and the right. The wireless dongle – included in the box – sits nicely in front of my television without blocking any part of the screen. While the sub woofer is your standard black box with speakers, the two speakers and the wireless connectivity dongle are pleasing to look at. Both the top and underside of the two satellite speakers are mirrors, giving them a very classy and polished look. This system, no matter what the decor of the room, will not look out of place. This feature cannot be understated; my living room is a shared space between my wife and I, and no matter what quality audio a speaker set emits, if they don’t look right, they are not staying! 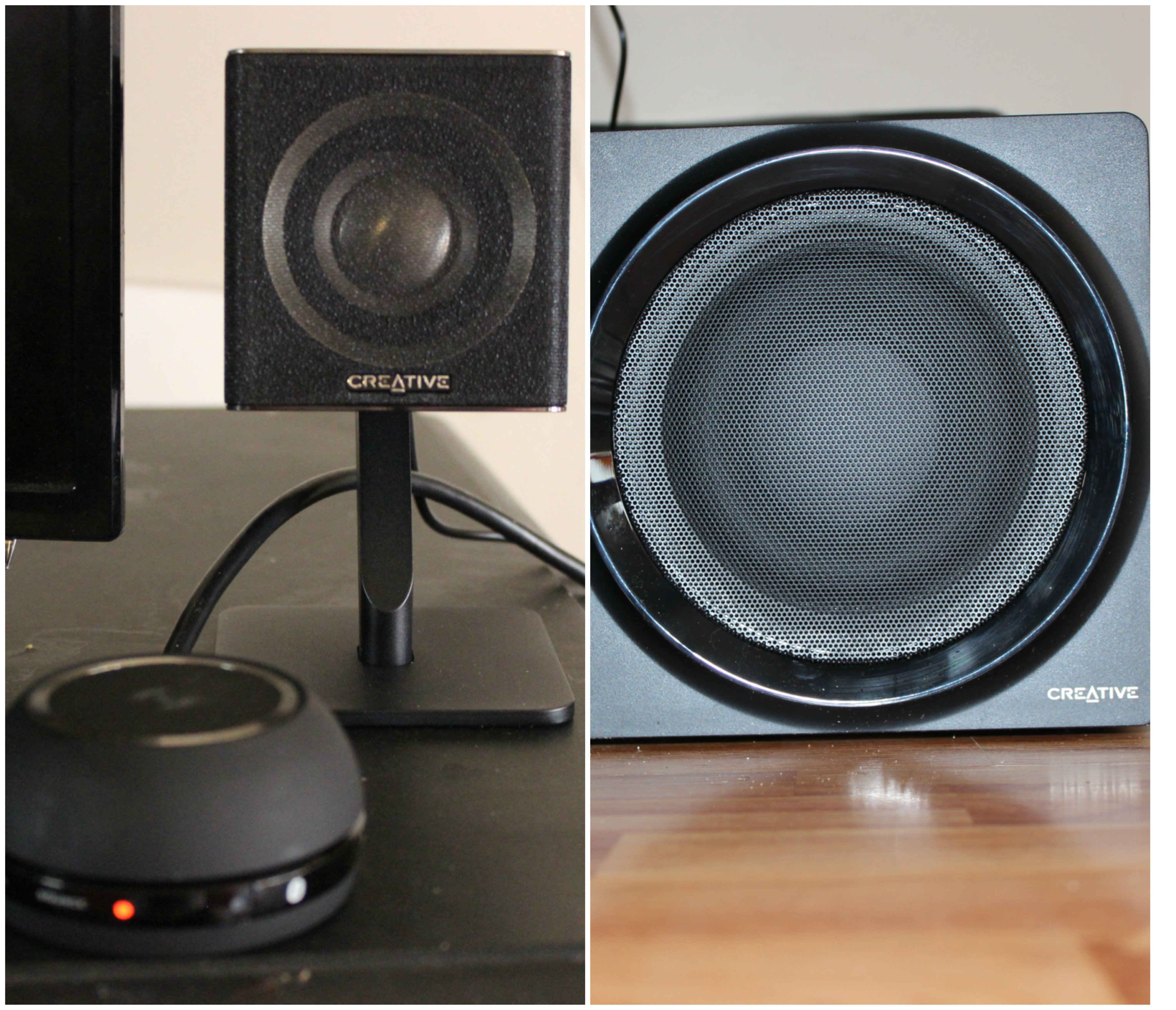 Here are the speakers set up in my living room. The satellite speakers flank my 52 inch television nicely on both sides, and look classy while only taking up a little bit of space. The dongle is low profile, and with my tv on the stand, can rest in front without covering any of the screen. The sub woofer sits nicely on the floor beside the entertainment stand.

In a cramped office or desk environment, the Creative T4 2.1 probably is not the wisest choice. While the speakers and dongle are pretty minimal, trying to find room for the sub woofer could be a problem; on top of all that, this system – like other 2.1 and 5.1 systems – comes with lots of extra wires to work into your setup. Although the products is billed as wireless, this is a direct referral to the blue tooth and nfc capabilities, and not that the box includes actual wireless speakers.

If you enjoy turning up the bass for movies, television, or music, the T4 2.1 will provide you more than enough of that. At times, I felt the bass overpowered the rest of the system, even when the dial on the back of the sub woofer was set to the middle (medium). Often, I found myself actually turning the base dial a bit on the low side just so that the rest of my audio was not drowned out. However, when I wanted bass, Creative delivered it at high levels with no noticeable problems. Unfortunately, there is no automatic way to turn up the bass, so if you are using this set up in your living room and are switching between media using a hand Harmony remote, you’ll have to manually adjust the base by turning the nob on the back of the sub woofer. A minor annoyance, perhaps, but an annoyance none the less.

In games and music, I love a deeper bass, as does my wife; however, when using these speakers to watch a wack load of Disney movies with the kids over the weekend, even with the bass on medium (middle), my wife – who knows her Disney movies Inside Out (see what I did there!) – instantly noticed a difference, especially in the sound of characters voiced by men. It took a few minutes of adjusting the dial before she was satisfied with the sound. In a one-off movie situation – when you grab that random movie on Netflix – you probably wouldn’t notice, but when you can say the movies line-by-line, there is obvious distortion of deeper voices.

The sound coming from this small set is incredible, whether in movies, games, or music. While I’ve had better sounding sets in the past, those have been 5.1 and better systems with many more speakers and twice to three times the cost. I would argue for between $200-300 USD, you are getting an above average product that performs better than some $500 systems I have used in the past. To here the speakers in action, please see this video posted to YouTube.

I cannot say enough good things about the Creative T4 2.1 speaker system, and I’ve used a lot of systems so that is saying a lot. Even those who worry about complications setting up a system in their living room, the T4’s could not be more straight forward. While most cables are included in the box to hook this up appropriately, I was disappointed that the system did not include a simple optical digital cable, which is by far the easiest way to hook up the T4’s to your television. For a fraction more cost to themselves, Creative could have added just a bit extra to their already great customer service. It is definitely something for them to think about in the future as they inevitably release upgrades to the T4 system.

I’m really excited to see what Creative is going to do next, especially when it comes to their smaller speaker set ups. If the quality on the T4 is any indication, I’ll be grabbing Creative products more frequently in the near future.