(warning: important plot details on Tiny Tina and of Borderlands 2: Assault on Dragon’s Keep are discussed below).

Every time I found myself playing through the middle chapters of the Borderlands 2 story, I found myself cringing at Tiny Tina. Every random player I found myself shooting and looting alongside would laugh hysterically at Tina’s smarmy, childish dialogue, as if her babbling, childish caricature was some marvel of RPG humor. It wasn’t.

For the only important, non-Siren female character in the game (let’s not talk about “crazy” Tannis or Ellie), Tiny Tina was a mess of exaggerated stereotypes, constantly screaming about big booties or reciting poems disturbing not only because of their violent nature, but their simplicity and willingness to paint Tina is a borderline mentally-challenged child lesbian with no attempt to give her character any depth.

In short, I hated Tiny Tina 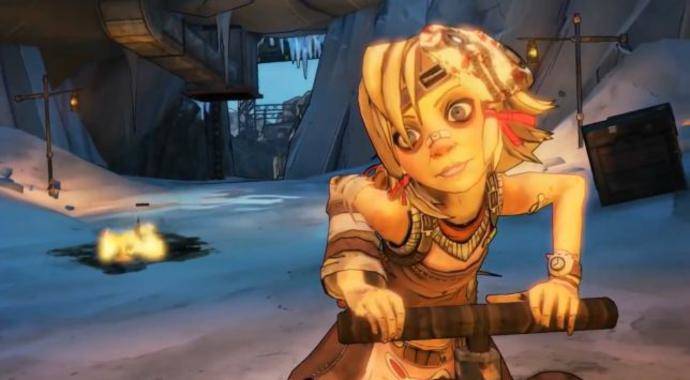 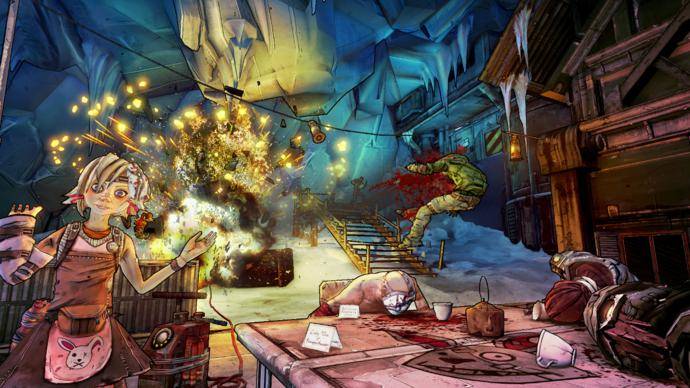 The introduction to Assault on Dragon’s Keep alone gave me hope I’d never had in the character before: sitting in the Sanctuary control center, Mordecai, Lilith, and Brick are watching Tiny Tina set up Bunkers & Badasses, a D&D-like Borderlands-themed board game. She explains the broad strokes of the game, but insists that everyone waits for Roland before they start. (A bit of context: in the main campaign, it’s revealed that Roland saved Tiny Tina from a torturous bandit when she was younger.) It seems everyone but Tiny Tina knows that Roland is dead – and as Lilith stumbles over her words looking for answers, Tina’s character slowly came to life.

It becomes clear fairly early on that Tina knows that Roland is dead: one of the DLC’s earliest missions finds players hunting down Roland the White Knight to help them save the queen (the ultimate goal of their quest into the world), employing his help further in key moments throughout the campaign. Boiling things down, Roland is the angel protecting players throughout this journey – which ultimately reveals itself to be a highly-fantasized version of Tiny Tina’s childhood. Tina is the ‘queen’ who is waiting for her prince, her white knight who is destined to come save her.

Deep down, she knows he’ll never come: these feelings play out in various side missions throughout the DLC. One side missions sees Tina’s tea guests get crushed by a die (which may be thrown by Brick, but still represents how children often deal with the anger stage of grief, by destroying other things they cherish), and another sees Tina forcing the players to chase an elusive weapon around the world, as she delays the inevitable, tragic conclusion to her own story.

Eventually, Lilith and the others push Tina into dealing with the pain she’s feeling: the game’s climatic moment is all but a recreation of Roland’s in-game death, an evil magician with a stapled-on Jack face killing the white knight by shooting him through the back – and without the silly relationship dramatics mucking up the moment during the campaign, Tina’s heartbroken narration of Roland’s death captures her character in a way no bit of Borderlands story has been able to before, exposing the raw nerve of a parent-less child whose one protector and father figure was murdered in cold blood by a selfish, greedy creation of evil.

It makes the emotional bond between father and daughter that writer Anthony Burch unsuccessfully reached for with Jack and his own daughter, Angel. Where as it was hard to feel bad for Angel’s death (having misled players for two entire games, being the daughter of an evil man who doesn’t care about her until she’s dead), Roland’s death in the DLC is given some real emotional stakes, a scared little girl who hides behind her jokes and fantasies, to escape the horror of dealing with the death of another person she loved.

After Borderlands’ narrative had disappointed me so many times before, I went into Assault on Dragon’s Keep expecting another fun but hollow adventure into the world of Pandora. Instead, I received a gorgeous, wildly entertaining piece of content that not only finds the emotional connection the series has so desperately needed, but does so in the place I’d least expect to find it.

Tiny Tina’s Assault on Dragon’s Keep is available to buy from Steam.